It was a night of highlights for the Ole Miss Rebels in New Orleans Friday evening as they demolished the Oklahoma State Cowboys, 48-20, in the Sugar Bowl. Chad Kelly threw four touchdown passes, including a trio of highlight-reel touchdowns to Laquon Treadwell, Laremy Tunsil ran for a short touchdown on a throwback screen and the Rebel defense shut down Oklahoma State's attack, which had been high-scoring all season.

The game started off slowly, with Oklahoma State opening the scoring via a Ben Grogan field goal after Chad Kelly was intercepted on the game's opening possession. Then, both teams traded punts. After the opening field goal by Oklahoma State, the Ole Miss offense became the story of the night, as the Rebels scored 34 points in the first half en route to a 34-6 halftime lead. The second quarter was particularly fruitful for Ole Miss as Treadwell caught two of his touchdown passes and Tunsil found the end zone just before halftime.

Treadwell added another touchdown early in the fourth quarter to cap Ole Miss' scoring. His three touchdowns tied a Sugar Bowl record for touchdown receptions. The junior from Illinois, presumably playing in his last collegiate game (though he has yet to declare his draft intentions), also broke Ole Miss records for single-season receiving yards, touchdowns and receptions to go along with the career receptions mark. 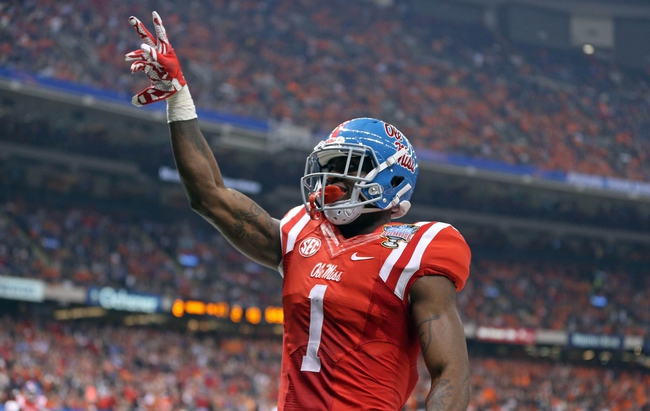 For his part, Kelly captured the Most Outstanding Player award after finishing with 302 passing yards, four touchdown passes and 73 rushing yards on 10 attempts. As a team, the Rebels finished with 207 rushing yards. After inconsistent efforts running the ball through the first half of the season, the Ole Miss running game came alive with the return of Laremy Tunsil from NCAA suspension. Since Tunsil's return during the Texas A&M game, the rushing game finished with 150 yards or more in each game.

Into the fourth quarter, Oklahoma State was held to negative rushing yards (including sacks) and the Rebel defense led by Mike Hilton, Marquis Haynes and DJ Jones looked more like the "Landsharks" of 2014 as they were playing aggressively, hitting ball carriers hard and pressuring Oklahoma State quarterback Mason Rudolph often.

Senior quarterback JW Walsh played most of the second half for the Cowboys and they got a bit of a spark, but by that point the game was well out of reach. With Walsh inserted as a running threat, the passing game also loosened up for Oklahoma State, and they scored their two touchdowns of the game and had another opportunity inside the 10, but turned the ball over on downs.

After last year's capitulation in the Peach Bowl, this year's Sugar Bowl victory serves as a redemption for Ole Miss and could act as a springboard heading into the 2016 season. There will be a bunch of personnel losses for Hugh Freeze and Co. to deal with, as Robert Nkemdiche has already declared for the NFL draft, Treadwell and Tunsil are expected to declare and a solid group of seniors will be leaving, including right tackle Fahn Cooper, guards Aaron Morris and Justin Bell, receiver Cody Core and starting running back Jaylen Walton on the offense.

On defense, the Rebels lose stalwarts CJ Johnson, Mike Hilton, Denzel Nkemdiche, Woodrow Hamilton, Trae Elson and Chief Brown. Particularly on defense, all of those have been major contributors for a long period of time and will be difficult to replace immediately.

For now, that is a worry for another day, as the Ole Miss faithful will be closing down the French Quarter and celebrating long into the night as the Rebels mark their first Sugar Bowl win since 1970 and their first 10-win season since Eli Manning's senior season of 2003.