SEC 2015: Arkansas at Tennessee Preview--Gametime, Where to Watch, Prediction and More

Both teams are looking for a bounce back game after some disheartening losses. Which team can bounce back and what are some keys to the game?

Share All sharing options for: SEC 2015: Arkansas at Tennessee Preview--Gametime, Where to Watch, Prediction and More

While neither Tennessee nor Arkansas is out of the running in its division, far from it actually, it almost feels that way with both sporting at least two losses including last week's come from ahead losses. The winner of Saturday's game will still control its own destiny, but for the loser the season will officially edge into disappointment range given the hopes for the season that the fanbases held entering the season. 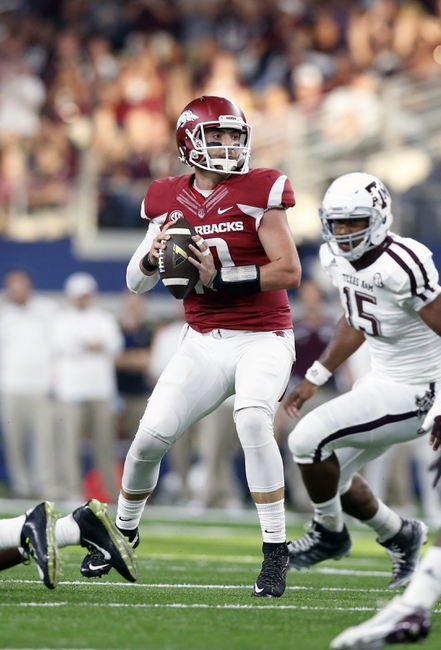 The visiting Razorbacks are coming off the back of three straight losses, but only last week's overtime loss to Texas A&M came in SEC play. After getting their "ass kicked" two weeks ago by Texas Tech, a loss to Tennessee would lead to the season teetering dangerously close to going completely off the rails. With a road trip to Alabama next week, this game becomes a must win if anything better than a 6-6 season is to happen for Bret Bielma's squad.

While the pressure to win is probably not quite as high on Tennessee, the pressure is certainly on Butch Jones after the capitulation that led to the improbable loss to Florida coming on the backs of the blown fourth quarter lead against Oklahoma two weeks earlier. If Tennessee does win, next week's game against Georgia becomes massive in the race for the East but a loss leads to a situation where an 0-4 start to SEC play becomes a real possibility with Georgia and Alabama forthcoming.

1A Sloppy Game? Like most of Saturday's games throughout the southeastern United States, weather due to Hurricane Joaquin could have an impact on the Saturday evening game in Knoxville. While rain should not be as much of a factor as in Clemson or Athens, rain is forecast for throughout the entire block of time during which the game should take place. While Arkansas ranks third in passing thus far this season among SEC teams, the rushing game is, of course, the cornerstone of every Bret Bielema team. And Tennessee is third in the SEC in rushing (while checking in at 11th in passing yards per game), so both teams could look to emphasize the ground game if the weather does turn the game into a slopfest.

2Who's the Better Running Team? If you answered Arkansas, the numbers so far would indicate you are incorrect. Through 2015's four games, Arkansas is the 41st ranked team in the Rushing S&P+ while the Volunteers come in at number 27. Even in tendencies, Tennessee is running more as they rush 67.4% on standard downs while Arkansas rushes 65% of standard downs, but the real difference comes in pass downs as Tennessee rushes nearly 47% of those while the Razorbacks only rush 22.4% of those. Is the difference in part due to the lack of a passing game shown thus far by Tennessee?

3Tennessee's Passing Game With all the hype entering 2015 for Joshua Dobbs at quarterback for Tennessee, he has yet to offer the dynamic threat that was teased the second half of 2014. Compared to his 2014 numbers, his rushing is down 18 yards per game (and about a half yard per carry lower) while his passing stats have also fallen off. All major numbers including completion percentage, yards per attempt, and attempts per game have fallen in 2015. Interceptions have been limited as Dobbs has only thrown one this season, but so has the effectiveness of the passing game. This has led to an explosiveness rate (IsoPPP) that comes in 104th in the country. 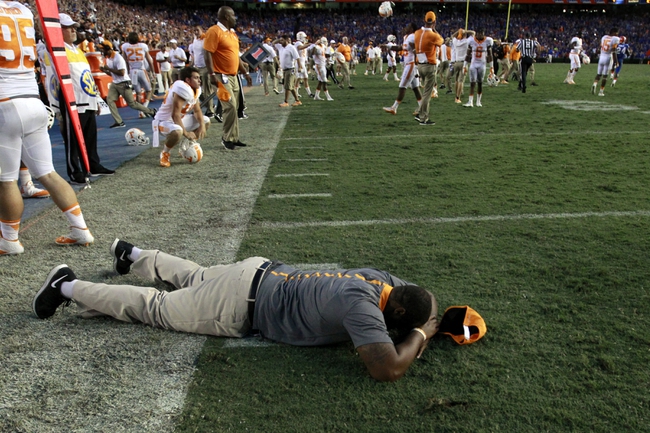 4Getting Up Off the Mat. After a pair of crushing losses, it will be worth watching to see if either team gets off to a slow start. Given the nature of last week's games, it would not be terribly surprising for either team to come out ticked off and hot out of the gate or to start off sluggish and struggle to click early. But both teams have tended to do well earlier in games and struggle down the stretch. And with the struggles both teams have had in closing out games, could the team that finds itself down early but finds something clicking in the second half be at an advantage? Particularly if, let's say, it's Tennessee that comes out hot early, but struggles in the second half. Given the fourth quarter problems the Volunteers have had, would a wet Neyland Stadium crowd rally the troops or start to turn on them?

Via @SBN_BillC, Arkansas has lost 14 straight 1-possession games. Now they play Butch Jones. Is it possible neither team closes it out?

5Rushing for the Hogs After the loss of Jonathan Williams during fall camp, the Arkansas rushing game got off to a slowish start for the 2015. Alex Collins had 127 yards in the season opener against UTEP, but only 54 in the loss to Toledo. The last two weeks, however, Collins has had at least 26 carries and 151 yards in each game. Last week against Texas A&M, freshman Rawleigh Williams III also stepped up with eight carries, 46 yards and a touchdown. As Williams III gains more confidence from the coaching staff look for his carries to increase, particularly if the game does turn into a rainy, sloppy game.

With the forecast and the strengths of these two teams, this game should be an old fashioned SEC power running game. Given that will be strength against strength for the two teams, the team that can do slightly better in the passing game to keep their offense moderately balanced should win. So far this season, Arkansas has had the better passing game, ergo they come through with a tight victory and continue to heap pressure on Butch Jones and the Volunteers. Arkansas 20, Tennessee 17