Share All sharing options for: SEC Media Days 2014: Hugh Freeze, Bo Wallace Cut Their Hair and Let It Down

Maybe it's just because it came on Day 4 and I was punchy by then. Or maybe it's because Hugh Freeze actually spoke about something that I found interesting and humanizing. But, for whatever reason, Ole Miss' stop at SEC Media Days seemed to be fun. Less about football at times, and more about Freeze's daughter, but fun nonetheless.

About that daughter: Ragan Freeze, it seems, has a future in blogging about college football. Because she's already got #HOTSPORTSTAKES down to an art. She's ranked the SEC coaches.

My daughter Ragan, she keeps a ranking of the SEC coaches. If you're at any of our games and viewing her an hour before game time, she's at midfield trying to find the other head coach. That's how into this football season she is.

I don't know that I will give you the whole ranking. But number one in her book is Coach Miles. In Baton Rouge he spent 10 minutes with her talking. Then last year when they came to our place, she was out there without me talking to him.

Oh, to have been a fly on the wall. Les Miles and a 15-year-old girl, talking college football. (Hugh Freeze did clarify later that she didn't include her father in the rankings -- which is nice, because domestic tranquility and everything. Freeze does hope he's No. 1 in Ragan's heart, or something.)

Freeze also poked fun at a verbal sparring match he and Steve Spurrier had a couple of years ago, when the Head Ball Coach spiced up his complaints about the interdivision schedule by saying South Carolina would love to play Ole Miss every year. Freeze also blamed a golf loss to Spurrier for his shortened hair -- though the Rebels coach cryptically added, "there's another story behind it, too, but we'll give Spurrier the credit for that. "

And then there was Bo Wallace, also talking about a reduction in the size of his own locks.

Honestly, I looked at the bowl game and I was like, "Gosh, that's really long. I'm just going to cut it and keep it good for the rest of the year." 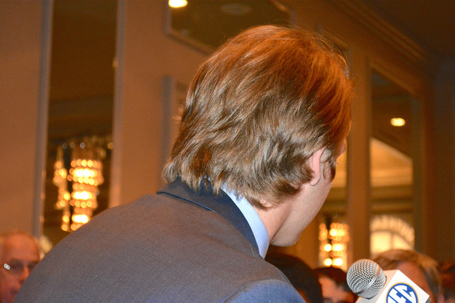 Wallace said he doesn't think it will grow long enough to hang out of his helmet this year. Oh, and he knows you call him Dr. Bo. It's fine.

I've read the story. It's kind of a funny story. But it's whatever they want to call me. They can call me Dr. Bo, Bo, whatever: it doesn't matter.

The Rebels are a long shot to win the SEC West, but they're not out of the picture. A little more precise surgery by Dr. Bo, and Hugh Freeze might earn a place atop Ragan's list, at least for the season.