The Texas A&M coach is more willing than many of his colleagues to swat down questions that he finds annoying. In related news: Guess who Sumlin got asked about a couple of times

Share All sharing options for: SEC Media Days 2014: Kevin Sumlin Is Not Amused

Kevin Sumlin doesn't suffer fools. There are all manner of bizarre questions that an SEC head coach is going to get asked at SEC Media Days -- it comes with the territory when the conference gives passes to the Hoover Chamber of Commerce -- but most of them find ways to issue a non-answer or just glide past an inconvenient question to get to what they want to talk about in the first place.

Not so with Sumlin. If he thinks your question is stupid, he's going to let you know. And he's probably going to punish you for it.

"Let me get this straight, the question was, What's it like not coaching Johnny Manziel?" Sumlin responded to that question, the first one to greet him after his opening remarks. Sumlin did speak a bit about transitioning to a new quarterback, then circled back around to label the Manziel question "irrelevant."

But the reporters weren't done asking about Johnny Manziel -- a player that, we should stress, was drafted by the Cleveland Brown three months ago and no longer plays for Texas A&M anymore. And so another hardy soul spoke out to meet with Sumlin's disapproval.

Ever since the party photos and whatnot have kind of emerged from Johnny, have you had a chance to visit him? If so, what have you shared with him and what advice have you given him? Also, how do you approach that with the young quarterbacks looking to replace him? Do you talk about off‑field behavior with the young guys?

Sumlin: Is this the SEC Media Days? [Note: The transcript here says that Sumlin smiled. It was more of a barely-concealed glower masked as a smile.]

No, that's a great question -- about the Cleveland Browns.

It's the kind of session that keeps the press on their collective toes. It's also a useful antidote to some of the mob mentality and #HOTSPORTSTAKES stupidity that seem to run rampant in Hoover, and indeed year-round. And Sumlin almost seems to be doing all he can to check the conventional wisdom of the football press corps -- he brought a punter to the biggest media event of the year. How can you craft a counterintuitive think piece about a punter? 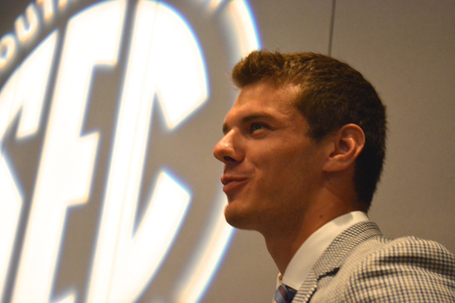 As for Drew Kaser, he was honored and didn't appear the least bit intimidated by his turn in front of a scrum of reporters. It wasn't quite as large as the mob that surrounded Manziel last year -- okay, it was a fraction of the size of the horde that descended upon Manziel when he sat in the same place at Hoover in 2013 -- but Kaser did have time to field questions about his place as a punter at SEC Media Days.

A&M bringing a punter just shows how well-balanced our team is -- offense, defense and special teams-wise -- when we represent all three here today.

And when asked about the focus on the dearly-departed quarterback, Kaser was honest. Manziel wasn't a distraction when he was in College Station and won't be one now, Kaser said.

At the same time, we're the 2014 Texas A&M Aggies. So I think that we're ready to just look forward, and look forward to the new era ahead of us.

A lot of Texas A&M and SEC fans are ready to move on, too. So why isn't the media?