Division pride, if that's a real thing, and signs of progress are on the line as the Dawgs and the Hogs collide in Little Rock for the first time

It's kind of refreshing, at least for an outsider, to see that Arkansas still plays at least one game in Little Rock every year. It used to be relatively common for SEC teams to play one or two games at stadiums in other cities in their respective states, giving more fans (or less mobile fans) an opportunity to take in a live game. 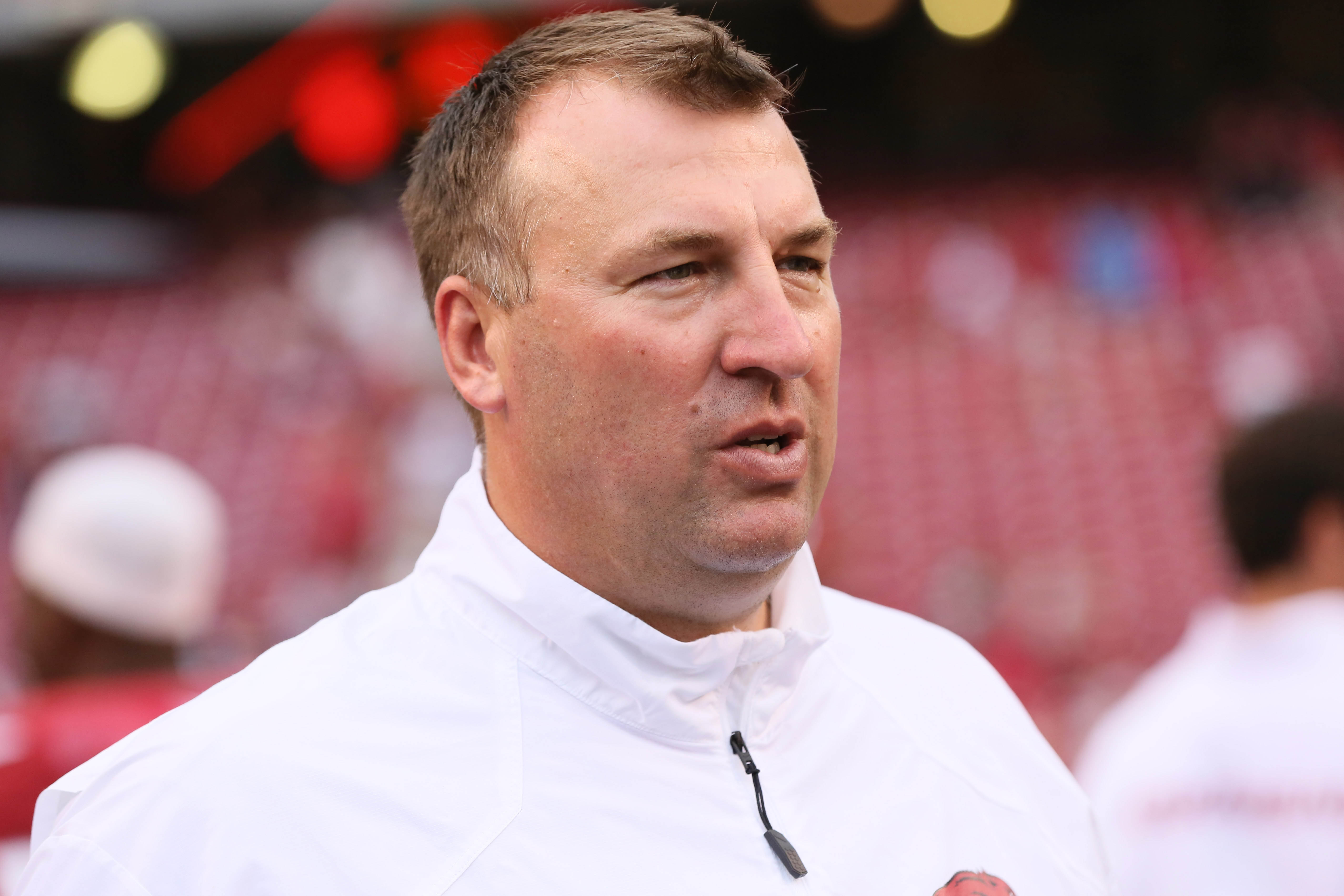 That said, even with the Hogs' annual visits to Little Rock, perhaps it isn't a surprise that this is the first time that Georgia will travel to the city. The Razorbacks weren't SEC members for football until 1992, most of their SEC games are played in Fayetteville and Georgia doesn't play the Hogs all that often because the two are not interdivision rivals.

The setting is far from the only important facet of this game, and is arguably pretty low on the list of significant aspects. This is a big game for Georgia, which remains the closest thing to a clear-cut leader the SEC East has. It's a chance for the Dawgs to prove themselves against a team from the superior division. And for Arkansas, it's an opportunity to get a growing monkey off the program's back.

1Gone Gurley II: The Sequel. Georgia's offense star running back is going to sit out at least one more game as the investigation into whether he was paid for autographs continues. Last week at Missouri, that meant more work for Nick Chubb, who carried the ball 38 times for for 143 yards -- really, do they grow these guys on trees in Georgia? -- and de facto backup Brendan Douglas, who had 13 carries for 65 yards. Despite those efforts, there's still a very legitimate question about how well this offense can work without Gurley.

2East vs. West. The struggle has been real for the SEC East this year. The division is already 0-4 against the West, and with Vanderbilt having one more game against the West to go, Tennessee facing Ole Miss this week and Auburn being on the slate for South Carolina and Georgia, among a list of other unfavorable match-ups, things don't exactly look encouraging for the East. This is a winnable game for the team that is currently in the driver's seat of the clown car that is the SEC East, and a win here would silence those who argue that even the worst SEC West team is better than the best SEC East team. Of course, a loss would prove precisely the opposite.

3The Streak. One of the reasons that Georgia and the East can be hopeful here is that the Hogs have lost 15 consecutive SEC football games dating back to the 2012 season. Under Bret Bielema, it's 11 straight. The conventional wisdom has it that Arkansas keeps getting closer and closer, capped off by last week's one-point loss against Alabama. That's not too far from the truth, though it's slightly more complicated than that. But this is is not the same team that lost consecutive games against South Carolina and Alabama last year by a combined score of 104-7.

4A brisk game. By choice and of necessity, Arkansas and Georgia both run a lot. In fact, both teams have run the ball on more than 64 percent of their snaps so far this season. (Note: Not sack-adjusted.) The only team in the SEC that runs the ball more often is LSU. Part of that is because Georgia has a first-year starting quarterback, and part of it is that the Dawgs have often had a lead this year. But a large part of it is that they have Todd Gurley and his clones in the backfield, and it would be criminally stupid not to run the ball frequently. The same could be said for Arkansas with Alex Collins and Jonathan Williams, who have combined to run for more than 1,200 yards and 15 touchdowns. This game could be over by 6:30 p.m. ET.

5A clean game. The importance of penalties to winning or losing a game is frequently overstated by commentators, but both Arkansas and Georgia have been pretty disciplined this year, on average. The Dawgs are tied for second in the SEC for the fewest penalty yards in the league per game, at 40.5 yards (on 33 flags). Right behind them are the Razorbacks, who check in at fourth with 44.7 yards a game (on a total of 30 penalties). That might not ultimately play into the outcome of the game, but it should make the game easier on the spectators.

Nick Chubb, RB, Georgia: As mentioned, Chubb is probably going to get a lot of the rushes that would have gone to Gurley in this one. But Chubb has been a dangerous back all year, running for more than 70 yards and a touchdown in two of Georgia's five games before they lost Gurley (Clemson and Vanderbilt). Even without last week's 38 attempts, Chubb would have the second-highest number of rushes on the team. He's more than a serviceable backup; he would be a starting back at more than a few schools across the country.

Georgia's run defense: Singling out one player for his role in this part of the game would be hard and unfair, so we'll just go with an entire unit that has acquitted itself well so far and will be needed against Arkansas. The Dawgs are allowing just 101.7 rushing yards a game and 3.0 yards a carry, both second only to Alabama. They probably won't match either of those numbers against Arkansas, but if they can come close enough, winning the game will be that much easier.

Alex Collins, RB, Arkansas: And Alex Collins will be the one trying to test them. The once-bitterly-contested recruit turned All-SEC caliber running back has run for 634 yards on 92 carries, an average of 6.9 yards per attempt. He's also scored a half-dozen touchdowns on the ground. Collins is fourth in the conference in rushing yardage this year.

I'm not as worried as you might think about Georgia without Todd Gurley. It certainly didn't hurt the Dawgs as they blew the doors off Missouri in the other other Tigers' own stadium last weekend, and as long as Chubb keeps running well, the difference is manageable. Still not idea, but manageable. I like this Arkansas team and I think that they can push Georgia, and it's not that hard to see the upset happening. But the Dawgs are still a slightly better team, and that should decide the game in the end. Georgia 37, Arkansas 28