There's a good reason why the SEC struggles more in basketball than in football.

In college sports, you can find out a lot about the discrepancy between various teams by following the recruiting. As a follow up to yesterday's post on the conference's struggles, I'll use this technique will help explain further the disparity between SEC basketball and football.

When it comes down to it, the southeast doesn't produce as many top basketball prospects as it does football prospects. Here is the number of Rivals top 100 recruits that went to high school in states inside the SEC footprint since 2005. Why 2005? Because that was the first year of the NBA's age limit that stopped players from jumping straight to the pros. For this post, I am leaving Texas A&M and Missouri out (sorry guys) for consistency's sake. 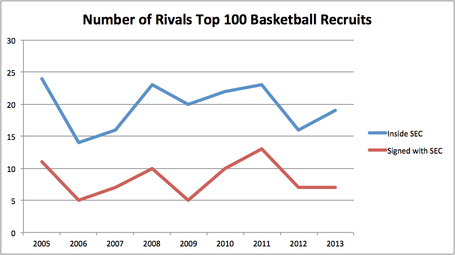 Even in the best years, the SEC's states can't even produce a quarter of the top 100 recruits. Furthermore, SEC schools aren't that great at convincing the region's top talent to attend their schools. In only one year, 2011, did SEC schools sign at least half the top prospects in their own states. When these players weren't signing with SEC schools, they primarily were going to ACC members, Big East members, and Memphis—you know, places known for basketball. 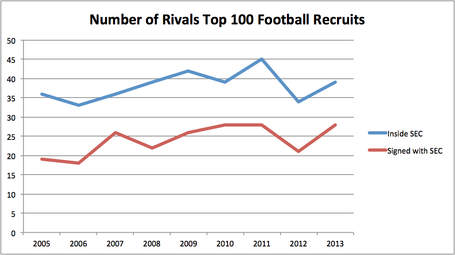 Even in their worst years, the states in the SEC's footprint still produced at least a third of the top 100 recruits in the country. Furthermore, SEC schools always signed at least half of the region's top prospects, and in six of the nine years, they signed more than 60% of them. When SEC schools lost out on top talent from their states, it largely went to Florida State and, to a lesser extent, Miami (FL), Clemson and USC—you know, places known for football.

It should come as no surprise that the two best SEC basketball programs over the past 15 years are the ones that recruit nationally. Kentucky can snipe the best prospects from anywhere in the country because it's basketball royalty. Florida does it more than you might think; four of the five starters on its back-to-back title teams were from outside Florida, and most of Billy Donovan's longest tenured NBA players were as well: Jason Williams (West Virginia), Mike Miller (South Dakota), Matt Bonner (New Hampshire), David Lee (Missouri).

I don't know what kind of recruiting budgets SEC basketball coaches have, but it's a fair bet that they're smaller than football recruiting budgets in most places even once you account for the difference in roster size. If that's the case, then SEC hoops doesn't have a chance of getting significantly better. Schools will have to go do battle in the northeast and the Great Lakes states to pull home more top talent, and while it would seem that SEC programs have a big climatic advantage to sell, they're aren't really cashing in on it very well. Meanwhile, places like Kansas, North Carolina, and Memphis eat their lunch back home.

Before you even get to the level of financial and fan support, SEC football basically has an inherent advantage over SEC basketball. Unless there's a major groundswell of support for junior level basketball in the region, which in large part would have to come at the expense of King Football, that's not going to change either.