It's obviously too early to say, but the SEC is not looking great as far as NCAA Tournament bids go. Kentucky and Florida should safely make the field, but it's hard to say for sure if anyone else will make it in. Tennessee, Missouri, and Arkansas are probably going to hang around the bubble from now until March, but there's no guarantee than any of them will make the field. Right now, it's possible to envision the SEC as a two-bid conference.

This shouldn't be happening. A 14-team conference getting only two or three teams in the field is supposed to be the domain of a mid-major league, not a rich and powerful BCS league.

This morning I linked to an article that goes over the details, but for right now, I am going to pull the camera back to a macro level and look at where the SEC has been in terms of putting teams in the Big Dance. I am going back to 1985, the first year of the 64-team tournament.

Note: For most of this, I will only refer to appearances that teams have made as SEC representatives. So, that will exclude Arkansas and South Carolina before 1992 and Missouri and Texas A&M before 2013.

Here is a table showing NCAA Tournament appearances for SEC teams since 1985. Click on it to see it larger.

Only one program has been consistently making the Big Dance the whole way, which is of course Kentucky. Alabama had a nice run under Wimp Sanderson that petered out in the mid-1990s under his successor, and LSU had a nice run under Dale Brown that ended towards the twilight of his career. Arkansas had a great run under Nolan Richardson, and Florida has been great under Billy Donovan.

Other than that, there really isn't any consistency at all anywhere. Tennessee made six tournaments in a row under Bruce Pearl, and Mark Gottfried took Bama to five in a row. That's it.

The best run the conference had at putting teams in the tournament was from 1999 to 2008: 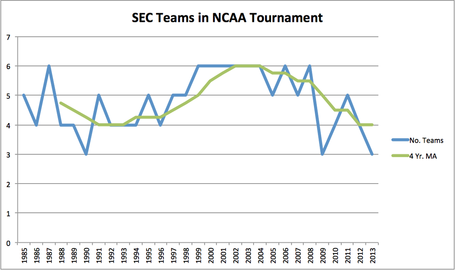 During that decade, it had six teams in the dance eight times and five in the dance the other two. Even then, though, only Kentucky and Florida were the programs to make the tournament more than six times in the span.

How did this nice run happen then? When one team fell off, another made up for it. Gottfried's run at Bama began right after Richardson's tenure ended at Arkansas. In eight of the ten seasons, either Georgia or LSU (but never both) went dancing. Tennessee's four missed tournaments coincided with Mississippi State's four-year tournament run. Auburn's three tournament appearances since the '80s happened in there, and half of Ole Miss's six tournament appearances since '85 happened there too.

So in short, it probably was just luck. No one outside the Big Two of UK and UF has been consistently making NCAA Tournaments since the mid-'90s. When the other teams are more or less making the tournament randomly, sometimes you'll get a lot of appearances and sometimes you won't.

Since 1985, only five programs in the 14-team SEC have made the tournament at least half the time regardless of conference affiliation. Two of them are recent imports (Arkansas and Missouri), one rose around the time another faded (Florida and Alabama), and one is the only true basketball school (Kentucky). LSU just missed being able to join this club by a single appearance, but it leans on older times much more than recent times there.

It's not like the programs are doing nothing about their recent struggles. Eight of the 14 SEC head coaches are either in their second or third year on the job. Some are showing some real progress too.

In the Ken Pomeroy ratings, Mike Anderson's Arkansas is 80 spots higher right now than where his first team finished two years ago (52 now versus 132 then). Cuonzo Martin's Tennessee is 33 spots higher than where his first team finished two years ago (25 versus 58). As for the second year guys, three of the four have shown big improvements so far: Johnny Jones's LSU is currently up 46 spots over last year's finish (100 to 54), Rick Ray's Mississippi State is up 54 spots (250 to 196), and Frank Martin's South Carolina is up 89 spots (210 to 121). It's still January so there's plenty of time for those 2013-14 season ratings to move around, and we'll check up on them again after the season, but five of the eight relative newbies have their arrows pointing decidedly in the right direction right now.

Still though, Missouri is joining Kentucky and Florida as an SEC school that will make the tournament far more often than not. The league will only need two or three of the other 11 teams to make the tournament in order to have a respectable number of teams in the field. That's totally doable. I'll bet Anderson will have Arkansas into perennial-tournament-team status in the very near future, which will make things that much easier.

I don't expect the SEC to get at least half of its teams in the field consistently as it did in that 1999-2008 span; the SEC has done that just 11 times in the 29 tournaments since '85 (just three times outside the golden decade). It's probably just not that kind of conference. However it shouldn't struggle to get more than three or four teams in, and if the early returns on the new coaching blood are predictive, it won't struggle at it for too much longer.