SEC Season in Review: Vanderbilt's Optimism Goes Beyond the Field

James Franklin has undoubtedly improved Vanderbilt football on the field. But he's also building a program that can sustain success

Share All sharing options for: SEC Season in Review: Vanderbilt's Optimism Goes Beyond the Field

On the surface, it's easy to find the reasons that Vanderbilt fans are so optimistic about their program. The Commodores just finished playing a bowl game in the second consecutive season -- the first time that's happened in the school's history. By clobbering N.C. State in the Music City Bowl, Vanderbilt won nine games on the season, the first time that's happened in almost a century.

Statistically, it was also a pretty momentous year for Vanderbilt. The offense generated 379.7 yards per game, the most since 2005. The 30 points per game average is the highest since at least 1946. While Vanderbilt's total defense has often been impressive in recent seasons, the 18.7 points per game allowed is the least since 1997 and only the fifth time since 1971 that the Commodores have held opponents below a 20-point average.

But the reasons to think that there might be more bowl games in Vanderbilt's future -- even if it's a bit earlier to talk about them contending for the SEC East just yet -- has less to do with what James Franklin has done on the field than what he's done off it. And when you consider the job that Franklin has done in turning Vanderbilt into a credible team, that's not a small statement.

In fact, the most impressive thing that Franklin has begun to do is pull Vanderbilt's recruiting rankings up. To an extent, as Year2 would be quick to point out, Franklin is building on the foundation that Bobby Johnson started putting in place. But the progress Franklin has made so far is breathtaking, judging by the two best-known recruiting services. (Disclaimer: The numbers for the 2013 are obviously very early.) 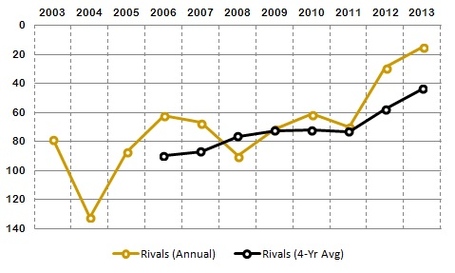 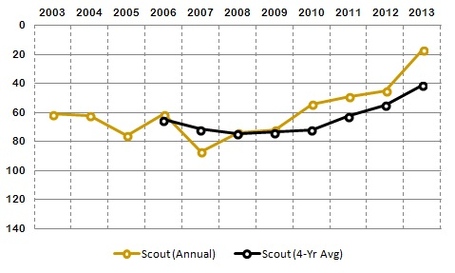 The uptick pretty clearly began before Franklin arrived in Nashville to start recruiting the 2011 class; if anything, the historic 2008 bowl season seems to have been something of a catalyst for the increase. But Franklin at least accelerated things, and there's no reason to think that Vanderbilt isn't going to land one of its best classes in years after almost unprecedented success.

But it also comes with the same caveat we noted about Ole Miss: Moving up into the recruiting Top 25, or even higher, isn't going to bring quite the same return in the SEC as it might in other conferences. It's not so much because a Top 25 class isn't good enough in the SEC, because getting into the top fifth of schools in the nation is going to help you games no matter where you are.

It does, though, just re-emphasize how difficult it is to move up in the SEC. Vanderbilt is going to face a lot of teams with upper-tier talent, and it's going to have to beat a lot of them to be more than the fourth wheel in the SEC East. And that' assuming that the new staffs at Tennessee and Kentucky aren't going to improve those programs, which is quite the assumption.

That said, you have to start somewhere. And Franklin's starting out strong, both on and off the field. He just has to keep things going and hope that he can keep the Commodores ahead of the schools they've already passed.