After Blown Opportunity, Bobby Petrino Gets an Incomplete at Arkansas

Share All sharing options for: After Blown Opportunity, Bobby Petrino Gets an Incomplete at Arkansas

In lieu of a 2011 review of Arkansas, for obvious reasons

It's a bit hard to wrap up Bobby Petrino's career at Arkansas, not least because of the bizarre way in which it came crashing to an end. April is not usually the month for writing career obituaries for college football head coaches.

But there's also a little bit of an added element of mystery to Arkansas now that we've seen the end of the Petrino Era in Fayetteville: For all the hope and admiration he engendered among Razorbacks fans, Petrino really didn't give them much more of a tangible return on their investment than did Houston Nutt, who got to the train station just a few minutes ahead of the mob.

Petrino's winning percentage at Arkansas was about 50 points higher than Nutt's, but that's a relatively modest improvement given the difference in perceptions of the two coaches. Petrino also brought Arkansas the first BCS bowl bid in school history -- a loss -- but unlike Nutt, he didn't get to the Georgia Dome for the SEC Championship Game. (Nutt got there twice, though once because of sanctions against Alabama; he lost both of them.)

In fact, the loss of this year might have taken away from Petrino the best chance he had seen yet to finally beat Alabama and LSU in the same season -- he was 0-4 against the Tide and 2-2 against the Tigers -- and get to Atlanta. With a win there, he could have all but cemented his status as a better coach than Nutt; instead, we're left with questions.

That's why the best grade for Bobby Petrino's time at Arkansas might be "incomplete." He built a program that was primed to finally put itself among the elite in the SEC; but because of his personal foibles, his chance at sharing that glory is gone.

There was one aspect of Arkansas football, though, where Petrino completed his transformation of the program. For years, Arkansas fans had griped about a boring offense that ground out wins and occasionally helped lead to losses. And there's no doubt that -- even if you account for the fact that Houston Nutt's final team had Darren McFadden and Felix Jones -- Petrino's offense in 2011, his final season at the helm, was dramatically different than the one that accompanied Nutt's finale. 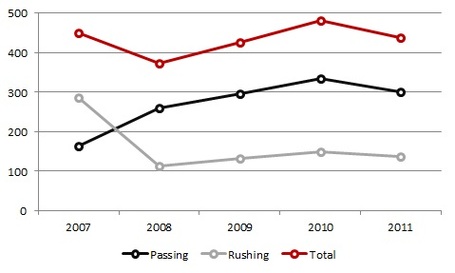 You can argue that Petrino's results are actually pretty impressive, given that the 2009 and 2011 teams were pretty close to the 2007 output without a player quite like McFadden, and the 2010 squad actually gained more on a weekly basis than any of them.

But it's also pretty clear that Arkansas simply traded one form of offensive imbalance for another. While "balance" is not worth quite as much as television analysts would like you to think, it does matter -- and whether it was Nutt or Petrino overseeing the program, there was no balance to be found.

The total yardage from passing and rushing under Nutt in 2007: 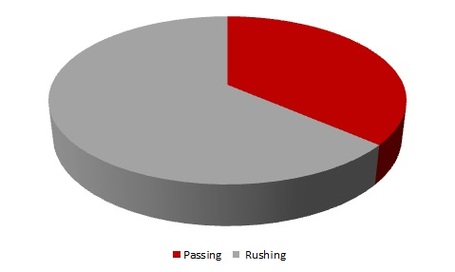 And the same thing for Petrino's final year in Fayetteville, in 2011: 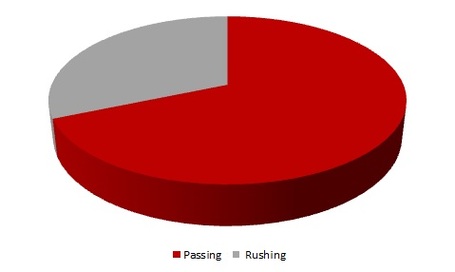 That's about as close to a mirror image as you're going to get. And while it seemed to be working well for Petrino -- his 21 victories over the last two years are more than Nutt put together in any pair of seasons -- you have to wonder if it ever would have worked well enough to get past both LSU and Alabama in the same year.

Because right now, there's no path through the SEC West that doesn't go through Baton Rouge and Tuscaloosa. And because Petrino could never navigate that path without the wheels coming off, it's hard to see what Arkansas got from hiring him aside from a few more pass plays and the opportunity to lose the Sugar Bowl.

Petrino might have gotten farther than that with time. He might have left a bigger dent in the Arkansas trophy case than did Nutt.

But we'll never know because he never got the chance. And as Petrino said the other night when talking about his dismissal as head coach, he has no one to blame but himself.