Bobby Johnson: How Good a Coach Is He?

Share All sharing options for: Bobby Johnson: How Good a Coach Is He?

How good a coach is Bobby Johnson? It's a pertinent question since he got Vandy to its first bowl since 1982 (its fourth overall), and it first bowl win since 1955 (its second overall).

Before going to Vanderbilt, Johnson was the head coach of Furman. He went from a 3-8 in his first year to two SoCon titles (1999, 2001) and a trip to the i-AA championship game (2001). Though he lost the title to Montana, it was a close 13-6 game. That performance was enough to earn him the job in Nashville.

Judging his job at Vanderbilt is a bit tricky. It takes more than simply glancing at his record.

One method of evaluating teams is looking at Pythagorean wins. They tell you how many wins you should expect a team to have given the points for and allowed by that team. Here's what Johnson's record looks like in that light, with games against I-AA teams left out. 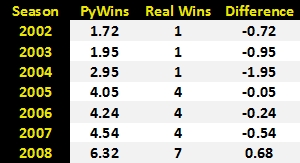 As you can see, Johnson's early teams tended to be fairly big underachievers. A difference less than one and greater than negative one is not that significant, but once you get differences of a win or more, it's worth talking about.

His 2003 and especially his 2004 team were noted underachievers. That is probably a function of what people would colloquially refer to as "a culture of losing" that needed to be corrected. If it seems like Vandy had hard luck in winning as many games as it could, the reason is because it's true. And then, after six seasons of a negative differences, the Commodores broke through to the positive in 2008.

The big takeaway from this I would say is not the differences. Rather, it's the fact that the Pythagorean wins have increased each year. Even as Vanderbilt was winning just one I-A game a year, the Dores were improving their for/allowed ratio. Then once they jumped to winning four I-A games a year, they were still improving that ratio. Despite finishing fifth or sixth in the East all those years, they finally made a jump of nearly two PyWins in 2008.

That as much as anything is why I would consider Johnson a very good coach. Just getting Vandy to a bowl is a good achievement, but I can't help but conclude that other SEC coaches like Nick Saban, Urban Meyer, and Mark Richt could do the same thing. The bowl achievement is as much a testament to a good hiring decision and how good a fit Johnson is there as it is his coaching ability.

However, how many coaches do you know of that had their teams improve for six consecutive seasons? Everyone goes up and down, but Johnson's Commodores have done nothing but get better. I don't know if they can continue the trend to next year, if for no other reason than it's really hard to improve seven years in a row.

On the plus side, Johnson signed his best recruiting class by far in February. A combination of Johnson's good coaching with some real, actual good players could mean that Vandy moves up to where Kentucky is now: an annual bowl contender and no longer a doormat. After all, an anonymous opposing SEC assistant coach told Athlon that Vandy is always well-coached and its execution is among the best.

If Johnson can just get quality players to match the quality execution, regular bowl visits could easily become a reality.