The tyranny of Georgia atop the SEC Power Poll has ended, and they are replaced by -- Alabama! What a refreshing change of pace! At least we got a couple of weeks without the Tide at No. 1 to make this season mildly interesting. (Also note that the week I dropped Alabama from the top of my ballot was the week they get there in the overall poll. Thanks for the back-up, guys.)

Really, it's more of a three-way tie for first at this point. Eight points separates No. 1 Alabama from No. 3 Auburn. To give you an idea of how tight that is, Georgia's lead over the No. 2 team last week was 14.5 points -- and there were 13 voters who cast ballots last week, as opposed to 14 this week. Alabama, A&M and Auburn are about as close this week as they were last week, even with Georgia no longer picking up any first-place love.

Georgia falls precipitously, and almost clear out of the top half of the league, with the slide stopping at No. 7. South Carolina, meanwhile, jumps a hefty five spots to knock the other other Tigers down to eighth. Florida's "effort" against Kentucky leads to a two-spot drop for the Gators but no corresponding increase in the Wildcats' ranking. Arkansas moves up one spot for shellacking a Big 12 team while Tennessee drops a place after being shellacked by a Big 12 team. Vanderbilt, as always, is the unanimous last-place team and the only spot that everyone agreed on. Voters?

Alabama gave up 13 first downs? They must be slipping.--A Sea of Blue

Sims is getting comfortable with handing the ball off, which means Saban will have to tackle Kiffin at some point Saturday to stop him from throwing down field on all downs.--Georgia Sports Blog

Won their past two games by a combined score of 93-12, and the overwhelming narrative has been to pick at their flaws. Perhaps our standards are a wee bit high?--And the Valley Shook

The Razorbacks sure looked impressive runnin' the dang ball. If Bert can beat Northern Illinois, he can prove that he's truly moved on from the B1G.--Rock M Nation

The Razorbacks listened to their spirit animal in a 49-28 win over Texas Tech. That animal is an unemployed plumber from Jonesboro named Skeeter who wishes Bielema would go full-on wishbone.--Dawg Sports

How big was the Arkansas win over Texas Tech? It all but assures that the SEC West will not lose a game out of the SEC this season, and if the Razorbacks can beat Georgia and Missouri -- yes, a tall task -- the West will not suffer a loss to anyone out of the division.--For Whom the Cowbell Tolls 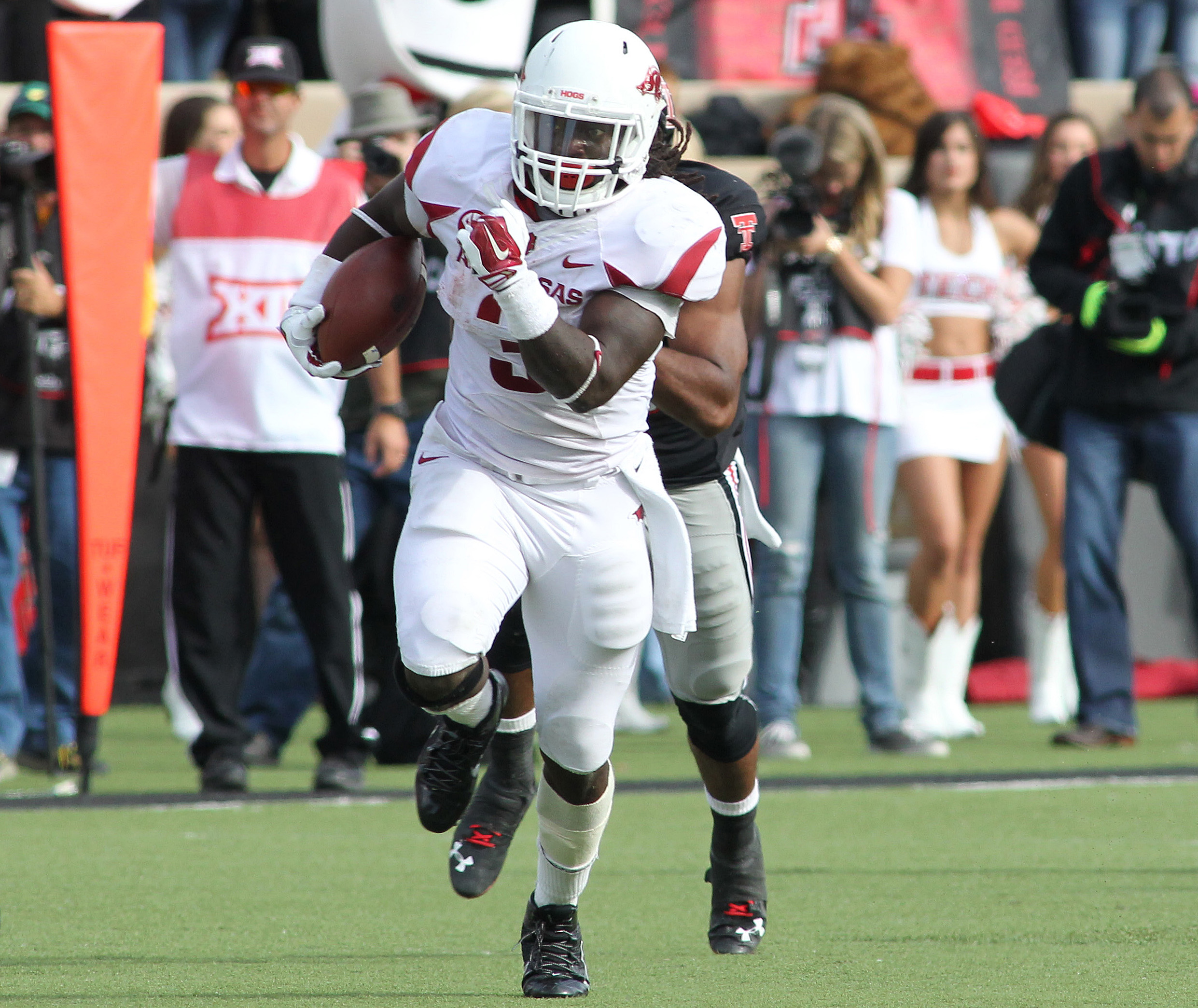 We're about to learn a lot about Auburn this week. Playing a power five team on the road on a Thursday night is a classic trap situation.--Red Cup Rebellion

Pro tip from an experienced party for any Auburn fans thinking about traveling to Kansas this week: don't. Seriously, just don't. It's awful.--Rock M Nation

Least inspiring off-week of the year, but there is still time for an arrest before a trip to Kansas State Thursday night.--Georgia Sports Blog

Hey, the Gators are leading the East this morning. That's not gonna last long.--Get the Picture

"Victory" is a relative term.--Dawg Sports

Muschamp gets chance after chance to prove that he's more than a talented defensive coordinator and time and time again he barely hangs on. Not sure he can do that will work for the rest of the SEC schedule.--Arkansas Fight

Still a legitimate threat to win the division. This is why the SEC East can't have nice things.--Rock M Nation

Not sure what this means for the East, but it's certainly a race now.--A Sea of Blue 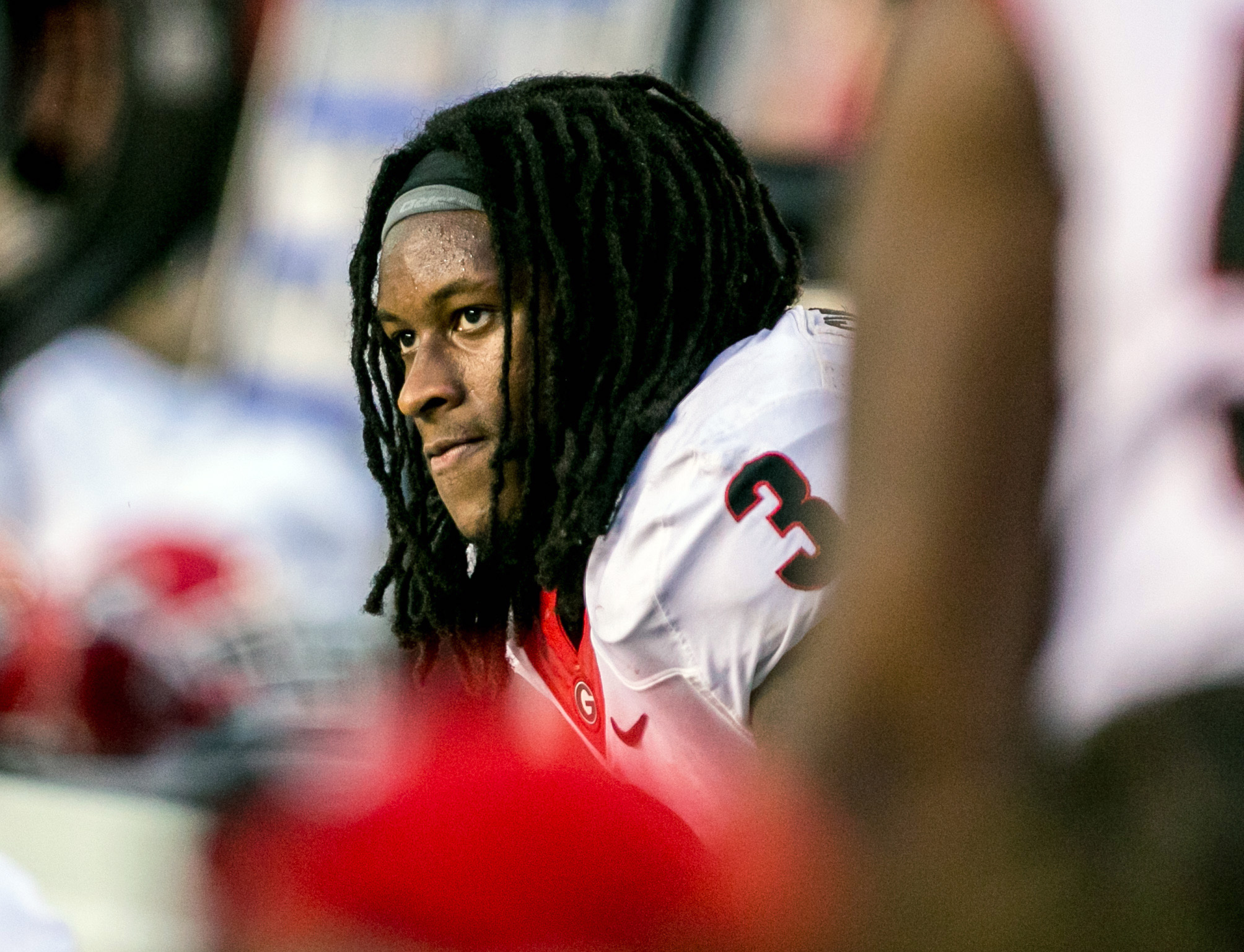 Defensive line was never going to be the issue, and still isn't. The lack of a running game and implausibly bad blown coverage is still very much a concern. That said, Towles is going to be a good one.--Roll Bama Roll

Kentucky should not be good this season. They're only good when they're on Auburn's schedule! Looks like Stoops has this program on the right track.--College and Magnolia

Kentucky lost that game in the most Kentucky-like fashion.--For Whom the Cowbell Tolls

Even against weak teams, a suffocating defense earns you some serious cred. LSU has that, and they've earned every bit of respect they have gotten thus far.--Red Cup Rebellion

As long as the Tigers let Fournette grind out 5ypc they'll be fine. Can they let him?--Georgia Sports Blog

The polar opposite of A&M. The offense is still fumbling for basic competence, but it is possible that no one is ever going to score a point on this defense ever again. Not likely, but possible.--And the Valley Shook

Yeah, the Bulldogs are undefeated. But here's what's coming up in their next three games: at LSU, TAMU and Auburn.--Get the Picture

Averaging 43.7 PPG right now, which makes my head hurt. I'm not prepared to accept a Bulldog team with a prolific offense.--And the Valley Shook 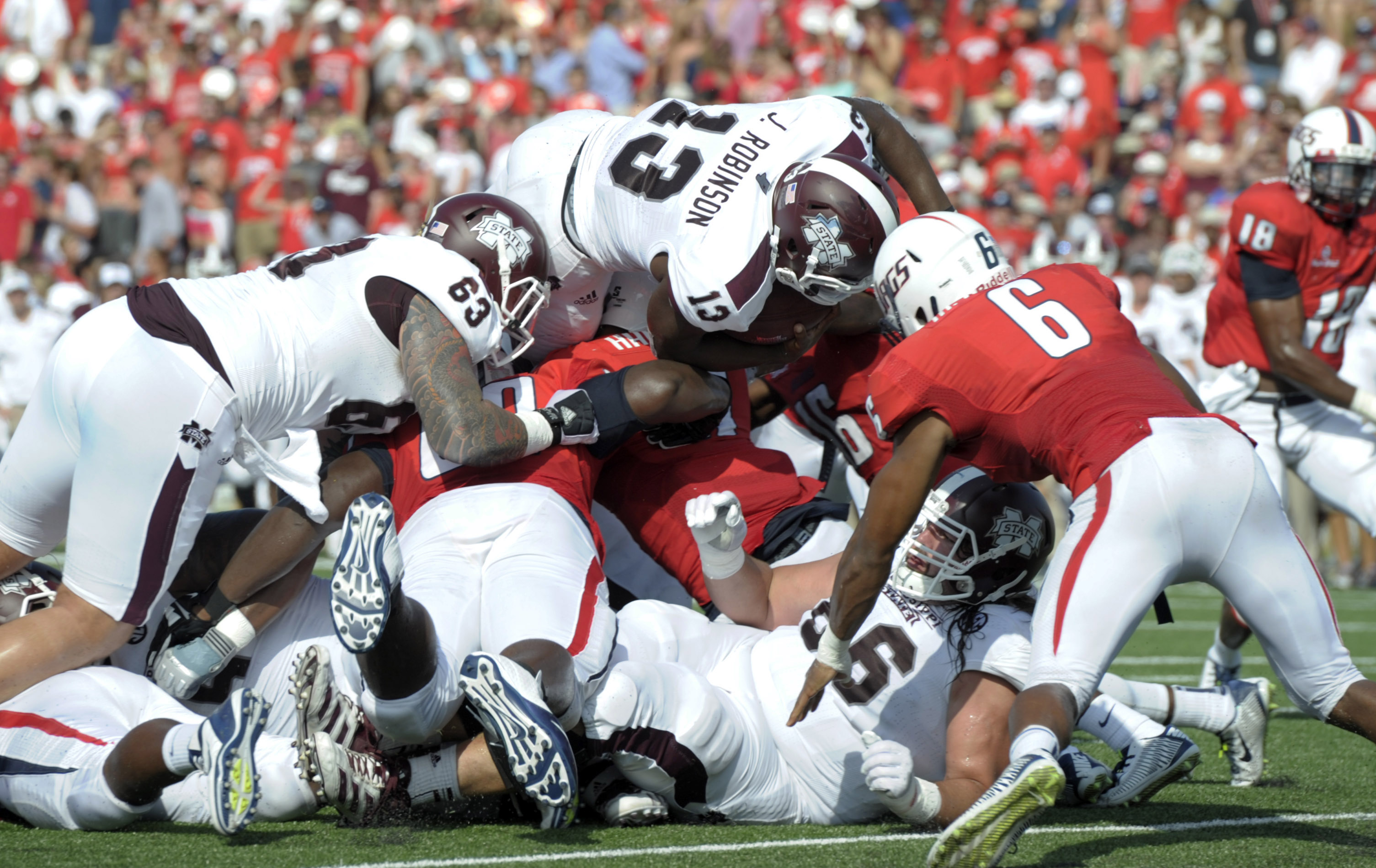 I want them to beat a team from a real conference first, and no, Indiana doesn't count.--And the Valley Shook

Much as it has the last few games, the Tigers start out slow and pull away in the fourth quarter. They can do this one more week (Indiana) before being tested in the SEC's other Columbia.--Arkansas Fight

I'll bite: show me what you can do versus South Carolina on 9/27 and I'll anoint the Tigers this year's Eastern division winner. Given the generosity of the USC, UGA defenses, and Florida's gaffes, the MU could very readily repeat.--Roll Bama Roll

Sure, they haven't played anybody decent yet, but they're pounding their opponents. Isn't that what good SEC West teams are supposed to do?--Get the Picture

Laid to waste a ULL team most figured to be a pretty good Sun Belt squad. Bo Wallace is hitting over 75 percent of his passes. Are the 2014 Rebels more the team that looked so very average against Boise or the machine of this past week? Conference play will be telling.--Roll Bama Roll

Spurrier must run an old operating system, and it just took a long time for the system to boot up.--And the Valley Shook

At this point, we have to say wins over ECU and UGA are the nation's two best. Lost in the deserved praise for the UGA win is that the defense still has much work to do. Missouri will test this secondary in ways that Hutson Mason could not.--Roll Bama Roll

Avoided a slaughter on the road to Oklahoma might be the nicest thing you can say about the Vols so far this season.--Georgia Sports Blog

Better teams than this one have gone to Norman at night and struggled. Worley hung in there, and the running game surprisingly made a little bit of noise. Rebuild is still on track for 2015.--Roll Bama Roll

I don't really care that they were underwhelming against Rice, and neither does Kevin Sumlin.--Red Cup Rebellion

The Aggies keep on rolling. Even rain and a soaked, hole-covered field couldn't slow down that offense.--Rock M Nation

Rolling strong and a serious threat.--College and Magnolia 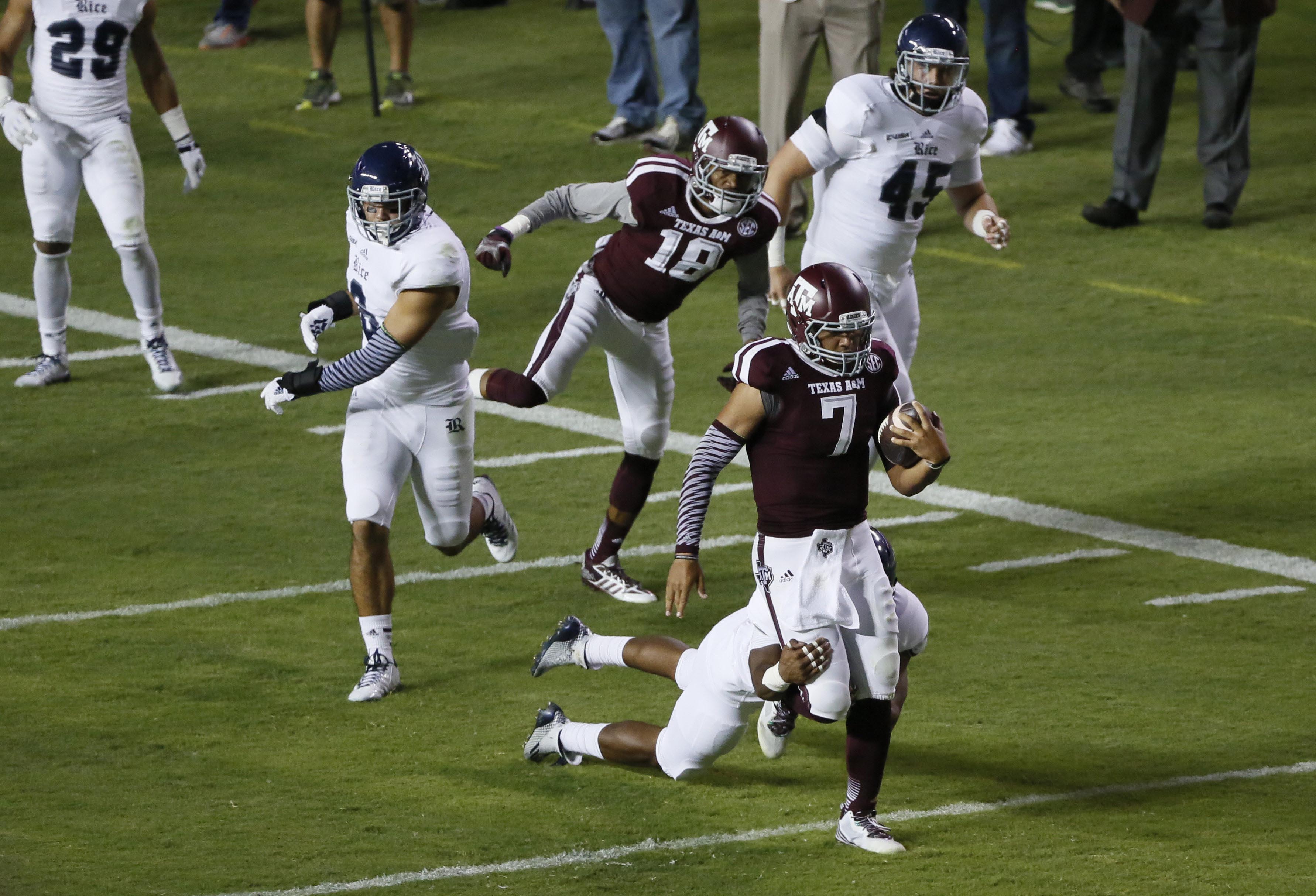 An SEC team beating a team from New England shouldn't be a "oh, wow, look at that" kind of moment.--Red Cup Rebellion

If you know a Vandy fan, give them a hug. It's going to get worse from here. A lot worse.--And the Valley Shook