SEC 2015: The Ole Miss Rebels Might Be the SEC's Most Inscrutable Team

Looking for a team that the experts really can't agree on? How about Hugh Freeze's squad in Oxford

Share All sharing options for: SEC 2015: The Ole Miss Rebels Might Be the SEC's Most Inscrutable Team

One of the themes this year for the SEC, and the SEC West in particular, is how hard it is to figure out what's going to happen once the season kicks off. There are so many variables -- teams that disappointed or surprised in 2014 and could return to form in 2015, squads that are clearly improving, major coordinators moves in some spots -- that we just don't know what to expect.

One of the more intriguing teams this year is Ole Miss. The preseason consensus around the Rebels appears to be that there is no consensus. Depending on to whom you listen, Ole Miss could end up anywhere from second to sixth in the SEC West and there would be multiple people able to say, "I told you so." That might not be the most confounding outcome this season, but it's pretty close.

Actually, if you look at the standard deviation -- which is a way to measure how widely distributed a set of numbers is from their average -- Ole Miss is the third most confusing team in the SEC, behind only Auburn and Texas A&M. Both of those teams have different reasons for being ahead of Ole Miss, but Auburn ranks as highly as it does because of a sizable contingent of selectors tracked by Stassen who think that the Tigers are going to come in sixth this year. Taking those voters out would defeat the whole purpose of doing a standard deviation, but there's more consensus around the Tigers than you'll see at first glance. 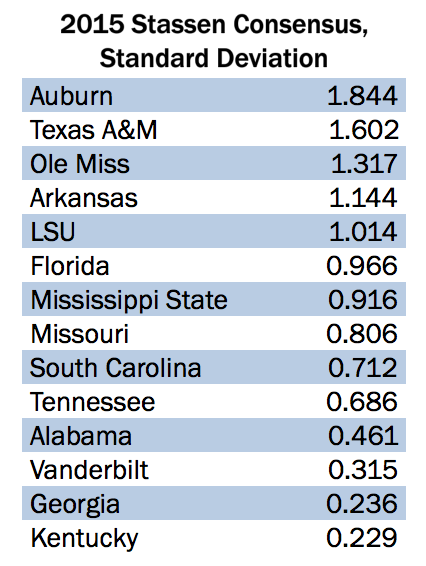 But Ole Miss is distinct from Auburn and Texas A&M in another way: It is one of only two teams that has multiple selections at five different places in the Stassen roundup. At least two selectors in each case peg the Rebels at anywhere from second place to sixth in the division. Arkansas is the only other team with a similar spread if you get rid of what are essentially outliers. For all intents and purposes, Ole Miss is one of the more unpredictable teams in the conference this year. (And that doesn't even account for David putting the Rebels in Atlanta.)

Why Ole Miss? There are a couple of reasons that could explain the spread. For one thing, the Rebels are coming off their best season in terms of their record since 2009, were at one point ranked near the top of the polls and played in their biggest bowl game in a long time. Combine that with the fact that the Rebels beat just one FBS team after Oct. 18 and got crushed, 42-3, in their bowl game, and those who cherish a team's momentum are likely to push them down lower.

And there was the until recently (and perhaps still) unsettled situation at quarterback. And while Chad Kelly appears to have already surpassed Bo Wallace in alleged threats to use an assault weapon, it's a tall order to replace Wallace on the field. The good doctor was 229-of-381 passing for 3,194 yards, 22 touchdowns and 14 interceptions in 2014.

Finally, Bo Wallace is not the only player even casual SEC fans might recognize who won't be on the sidlines this year. Senquez Golson and his 10 interceptions -- yes, 10 -- are gone. Deterrian Shackelford, Serderius Bryant and Cody Prewitt have also moved on from the defense.

But there's a lot of talent returning to Oxford as well. All but one letterman on the offensive line is back -- though some starting roles have changed, at least for the UT Martin game. To the delight of just about everyone capable of human emotion, Laquon Treadwell returns to play wide receiver after an injury late in 2014 derailed a great season. Six more of the top eight Ole Miss pass-catchers join him. Jaylen Walton is sill there at running back. Marquis Haynes, who led the team with 7.5 sacks in his freshman year, and the Rebels' top two tacklers in Mike Hilton and Tony Conner are back on defense. Despite the bold-type names that Ole Miss is losing, it counts itself as returning 18 starters and losing seven. That's a pretty good ratio.

So look at the personnel losses and the late-season slide and wonder if Hugh Freeze can do it all again. But don't sleep on Ole Miss this season. There's more than enough left for another run at Atlanta.

The perfect season: The Ole Miss offense doesn't skip a beat with Chad Kelly at the helm, and Laquon Treadwell goes off, easily passing 1,000 receiving yards for the season and finding his name on a lot of finalists lists when awards season rolls around. The Rebels defense doesn't lose a step despite the personnel losses. Asking Ole Miss to beat revenge-minded Nick Saban might be too much, but the team is 7-1 when it heads to Auburn for a game that could decide the SEC West title. A win there would likely put the Rebels at 11-1 and could send them to the Georgia Dome with the chance at a national title on the line.

The nightmare: Kelly isn't impressive in his first few outings, and Ole Miss fails to keep things close in Tuscaloosa. Hugh Freeze watches as a full-blown quarterback controversy ensues. Meanwhile, the defense isn't quite as good with the losses its suffered. A second defeat at Florida begins to usher the Rebels out of the division race. Ole Miss wins just one or two of its last five games, dropping them to 7-5 or even 6-6.

What actually happens: The more you look at this team, the more you have to at least give it a credible chance of winning the SEC West. As far as the schedule, the draw out of the East isn't terrible, though it would be better if the Rebels traveled to Vanderbilt and faced Florida in Oxford, rather than vice versa. The one thing that could make things challenging for Ole Miss is that the Alabama and Auburn games are on the road, as is the Egg Bowl -- a rivalry that has seen the home team win 14 of the last 16 games. That could mean the difference between a trip to Atlanta for the SEC Championship Game and a trip to a less glamorous location in the postseason.