But will the coach's acknowledgment of his tenuous employment status help him survive?

Share All sharing options for: SEC Media Days 2014: Will Muschamp Knows He's on the Hot Seat

It is refreshing when a coach is blunt at SEC Media Days. It's especially refreshing when that coach is Will Muschamp, whose opening statements always consist largely of a recitation of his depth chart from memory, more impressive as an example of recall abilities than his oratory skills. But before ticking off nearly every player that will likely see the field for Florida this year -- and some who will likely not -- Muschamp offered a frank assessment of his own standing.

There will be a lot of chatter about hot-seat business. That's part of it. The way you combat that is having a winning football team and winning football games, which is what we're going to do.

Discussion about job security is, indeed, "part of it" when you go 4-8 at Florida with one of the losses coming to Georgia Southern out of the FCS. Generally, coaches try to dodge talking about the likelihood that they'll return for the following year's SEC Media Days. Muschamp talked about it, though. He engaged -- to the extent that coaches at this event ever engage -- when a reporter followed up on how Muschamp planned to turn the temperature down.

Aside from the possibility that Will Muschamp knows of an illegal narcotics ring being run out of Jeremy Foley's office -- something that can't be discounted after he was retained amid last year's debacle -- this is really the only thing Muschamp can control about his employment status after 2014. The offense is being overhauled and the chips from that will fall where they may, and where they fall is probably what's going to determine whether Muschamp returns to Hoover in 2015. 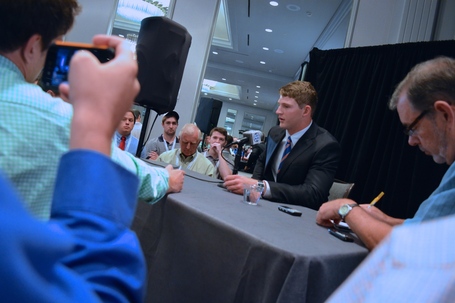 Not that his players are letting that get to them. "We've never talked about that," quarterback Jeff Driskel said of Muschamp's job security. "Nobody's thinking about that." The matter-of-fact way that Driskel said it makes it almost believable. But hearing discussion of Muschamp's job status can't help but be a distraction -- if not yet, then at some point in the future, when the Gators almost inevitably lose their first game, and the talk starts up again in earnest.