Book Review of Scorecasting: The Hidden Influences Behind How Sports Are Played and Games Are Won

Share All sharing options for: Book Review of Scorecasting: The Hidden Influences Behind How Sports Are Played and Games Are Won 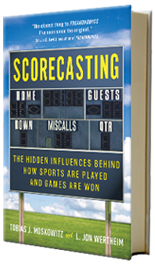 Scorecasting: The Hidden Influences Behind How Sports Are Played and Games Are Won

When the publisher of Scorecasting send me an email asking if I wanted an advance copy to review, I immediately said yes. It billed the book as "equal parts Freakonomics, Moneyball, and 'MythBusters,'" and it came with glowing sound bites from Bob Costas, Mark Cuban, and Steven Levitt (co-author of Freakonomics). Given that I enjoy statistical analysis, own those two books, and have nearly every "MythBusters" episode stored on my DVR, there really was no doubt.

So does it live up to that billing?

Formula-wise, it's almost exactly the same as Freakonomics: a University of Chicago economics professor (Moskowitz/Levitt) teams up with an author (Wertheim/Stephen Dubner) to apply mathematical analysis to commonly held wisdom. Scorecasting covers a wide variety of topics, like referee error, whether defense wins championships, why home field advantage exists, if icing a player works, and if players can really summon a hot streak when needed. It also covers issues such as the demographics of PED use in baseball, the number of black coaches in the NFL, and when to be careful about statistics that announcers and sportswriters use. Here's an excerpt from the chapter on the value placed on NFL draft picks.

In large part, the book covers the four major professional sports leagues in America (NFL, MLB, NBA, NHL). It also touches on tennis, golf, and something called "soccer" (which I think is like hockey but on grass). Unfortunately, it doesn't spend much time on college sports. The only chapter that does any real analysis on college sports is the one on home field advantage, and it just points out the problem of cupcake games (which we all know anyway). Of course, that's probably the reason why: the sample size of meaningful stats in college sports is much smaller thanks to body bag games.

That's not to say that I wouldn't recommend the book, because I do. It's a fascinating read, and the authors do a great job at making their cases. Like any book along these lines, it can be nitpicked endlessly (see this review from Jeff Anderson, co-creator of one of the BCS computer formulas), but Moskowitz and Wertheim acknowledge that they'll probably start as many arguments as they settle.

If you enjoy mathematical and statistical analysis of sports, you will almost certainly enjoy this book. It might tread some old ground for you (like with the chapters on going for it on fourth down, momentum, and NFL overtime coin flips), but there's plenty of new things here too. And if you're not really a math person, well, it does get pretty mathy at times. However, the prose is approachable and doesn't require a dictionary or textbook to understand. You will be able to understand their overall points even if the numbers overwhelm you some.

Ultimately, the book is all Freakonomics with very little Moneyball and "MythBusters" to it. There's no continuous narrative like with the former, and no one put their body on the line for a stunt or blew anything up like with the latter. However, that's a good thing. It doesn't shoehorn in any extras or try to be anything it's not.

It's a book with the potential to bring the realm of mathematical analysis of sports to the masses. That's a good thing as far as I'm concerned.

Scorecasting goes on sale today at all fine book sellers.