Why Did Jevan Snead Declare for the NFL Draft?

Share All sharing options for: Why Did Jevan Snead Declare for the NFL Draft?

There was another departure from the SEC in the last 10 days, aside from Lane Kiffin's chaotic exit from Knoxville, that caused more than a few people to scratch their heads. As Alabama and Texas prepared to play for the national title in Pasadena, Ole Miss quarterback Jevan Snead decided to declare for the NFL Draft.

This was not a complete surprise, though in the sense that it is not a complete surprise when someone threatens to set their own hair on fire and proceeds to do so. Jevan Snead and Houston Nutt were known to be discussing whether he would enter the draft; he had begun 2009 as one of the top quarterback prospects in the country before this:

While the rating numbers and completion percentages aren't great, what has to be even more troubling to any NFL team seriously considering drafting Snead are the interceptions. The 20 picks "leads" the subdivision and account for almost 6 percent of Snead's pass attempts; his touchdown-to-interception ratio is one-to-one. And he's going to a league where what we in college football would call a "slightly open receiver" is referred to as a "broken coverage."

Snead's decision almost certainly isn't unprecedented; when a 20-something athlete is told by agents and the like that he could be making millions of dollars in three months, he's generall going to listen. But it's difficult to find anyone in the last five years that entered the draft after being among the Top 5 in the subdivision in interceptions -- and impossible to name a quarterback who did so as a junior. 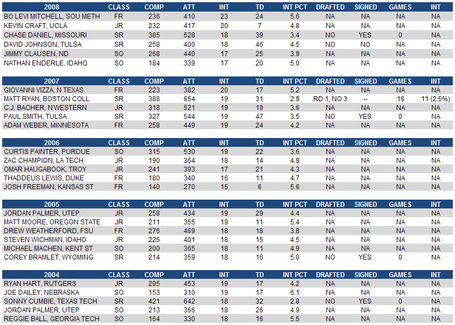 In five years, of 27 players who were either in the Top 5 or tied for it in interceptions thrown, only seniors entered the NFL Draft. And only one of the six who did ended up getting drafted or playing in an NFL game: Matt Ryan. And because he threw the ball 654 times in his senior season -- no, you didn't misread that -- the 19 interceptions were only 2.9 percent of his attempts. That's about half Snead's rate in his senior season. Jevan Snead does have some potential at the next level -- but so far, he's been no Matt Ryan.

But maybe Snead will be Matt Ryan at the next level. After all, the Falcons quarterback actually threw interceptions at a lower rate in his first NFL season than he did in his last year of college. (We won't talk about his second year in the League, okay?) It could happen. But Ryan is a rarity even among his first-round colleagues.

Again, click on the image and I promise it will be legible.

About eight of the quarterbacks drafted in the first round from the 2005 draft to this year's have seen significant playing itme in their first  year. Ryan is the only one to see his interception rate decrease. Alex Smith, Joe Flacco (FCS), Matthew Stafford, Mark Sanchez and Josh Freeman all saw their rate at least double. (Note to Sanchez: Pete Carroll was right when he said you weren't ready for the NFL. The jury is still out on him.) All but one of those five players were juniors.

Of course, there's very little question about why Jevan Snead actually declared for the draft. There might not be an NFL in 2011 -- admittedly, that's unlikely -- and even if there is, one of the proposals to try to save that season includes a rookie pay cap that could see as much as $200 million go from first-year players to veterans.

But Jevan Snead probably shouldn't have been worrying about that. If history is any indicator, he won't be drafted high enough to worry about how much money he might lose. And even if he is, he's in for a long first year.