Say What You Want: This is the Championship Game -- Florida vs. Oklahoma

Share All sharing options for: Say What You Want: This is the Championship Game -- Florida vs. Oklahoma

Anyone who's followed my blogging knows that I absolutely loathe the term "mythical national champion," mostly because I think it's nonsense.

It was stretching credibility to use this term even with only six or seven conferences were involved with the BCS; now that all conferences and teams are involved in the BCS decision-making process, the national championship game is the official title game. You might think it's an awful dumb way to choose a champion, and a lot of people would agree with you. But it's not mythical; it's how the sport has decided to choose its champion. (And if you want to complain that no one asked you -- no one asked baseball fans if they wanted a playoff, but they got one in 1969 and got the Wild Card in the 1990s over some fans' strenuous objections. Same for other sports -- none of them are democracies.)

In any case, there's not much to be said about this game that hasn't already been said. These are two great teams in what should be a great game. 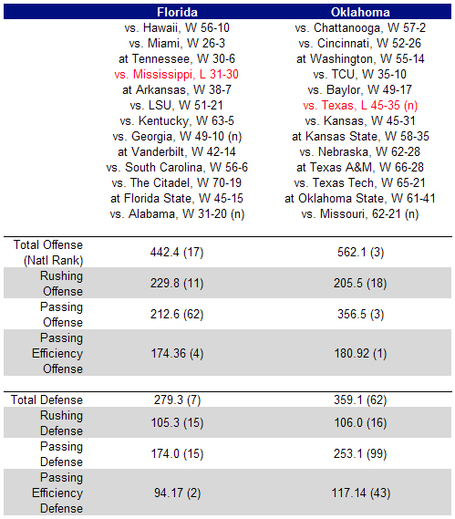 Very evenly matched teams -- except, perhaps, when it comes to defense and passing offense. On Wednesday's inaugural version of Team Speed Kills Now -- and if you didn't listen to it, don't; the next one will be much better -- I said that if QB Tim Tebow can hit some deep passes early, he could force the Oklahoma defense to back off and open up some more running room for Florida's Porches (Jeffrey Demps, Chris Rainey, Percy Harvin). Tebow should be able to do that -- he might not throw for a lot of yards on a per-game basis, but his does throw a beautiful deep ball.

This game once again forces us to ask the question: Are Big XII offenses that good, or are the defenses that bad. So far, results have been mixed. Northwestern only scored 23 against Missouri; Oregon rang up 42 against Oklahoma State. Ole Miss waxed Texas Tech, 47-34; Texas was not bad but not stellar when it allowed 21 against Ohio State. (The Buckeyes generated 379 yards in total offense.)

Oklahoma's offense is prolific, no doubt. Everyone knows QB Sam Bradford. Less attention is given, at least on a national level, to RBs Chris Brown (195 carries, 1,110 yards, 20 TDs) and DeMarco Murray (179 rushes, 1,002 yards, 14 TDs) -- but they are also integral to the Oklahoma offense.

The cliche is that defense wins championships, and there's a reason for that: Defense depends less on team coordination (though it certainly helps) and more on individual effort than offense. Sure, having a dominating defensive line helps your secondary, and the same is true in reverse. But it's a lot easier for one person to make up for the mistakes of another on defense than on offense.

Florida wins a good game -- and only puts it away with a late score. Florida 43, Oklahoma 34