One More Chance to Make History: Kentucky's Battle with .500

Share All sharing options for: One More Chance to Make History: Kentucky's Battle with .500

There have been a few chances this offseason for mid- or lower-tier SEC programs to win a bowl game that would have propelled them to near-historic heights. One of those teams, Vanderbilt, won a thrilling if not picturesque showdown with Boston College; the other, South Carolina, seemed to be going throw the motions as Iowa ran them off the field.

So now we come to Kentucky, the only other team that can really make program history -- the first time the Wildcats have strung together three winning seasons since a four-season stretch from 1953-56. (Bear Bryant started that one, by the way.)

Because of the vagaries of calculating winning percentages, the Wildcats actually lost a few slivers of a point off their all-time mark during the regular season, going from .50306 to .50303. (The old ties mess things up.) They can actually move up to .50346 with a win against East Carolina today.

Yes, that East Carolina, the onetime "BCS Buster" who dropped out of consideration with an awful three-game slide against N.C. State, Houston and Virginia. 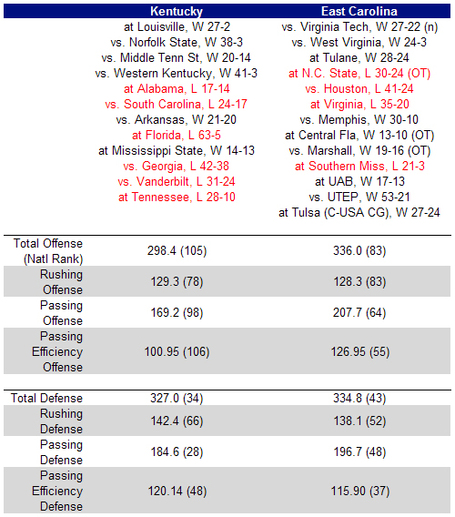 Of course, most fans look askance at Kentucky's bowl eligibility because of the cupcakes like Norolk State and Western Kentucky on the schedule. And, for the most part, the losses against other quality and mediocre teams seem to back that up; only the 17-14 loss at Alabama and the 42-38 loss to Georgia resemble good showings against quality opponents.

How this game goes depends on whether you think the Kentucky defense was as good as it looks on paper or whether you believe giving up 63 points to Florida (helped by special-teams and offensive mistakes) or 31 to Vanderbilt (again, mistakes) is the truer picture.

As with most two-choice questions, it's probably "somewhere in between." Meanwhile, new starting QB Randall Cobb is out and old starting QB Mark Hartline is back in. That should be the difference as Kentucky misses history. East Carolina 24, Kentucky 23