Share All sharing options for: EXCLUSIVE: The Real Reason Flight 1549 Went Down

NEW YORK -- Investigators with the National Transportation Safety Board now say they have abandoned their intial theory that a bird strike caused the downing of US Airways Flight 1549 and now believe it was instead caused by a "Julio Jones strike."

NTSB member Kitty Higgins said it appears that Jones was practicing his receiving skils with a few friends in Tuscaloosa when "things got a little out of hand." 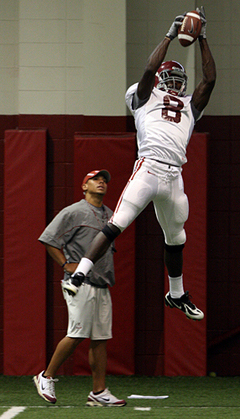 "It was weird," Jones said when contacted by a reporter. "I was just jumping up to catch a ball, and the next thing I know, I'm flying over Manhattan. Then the plane comes along."

Jones said going through the engine didn't hurt him as much as might be expected.

"Actually, it was almost as easy as going through the Georgia secondary," he said. "Almost."

But Higgins said investigators believe Jones caused just one of the engines to fail. She said the NTSB is still investigating reports that the other engine could have fallen victim to a "Knowshon Moreno strike" and that Leigh Tiffin was practicing kicking FGs at the time of the accident.