The Crimson Tide is moving closer to a consensus at No. 1, as a week full of near-upsets and one actual upset shakes up the rankings

Share All sharing options for: SEC Power Poll, Week 6: Alabama Tightens Its Hold on the Top Spot; SEC West Tightens Its Grip on Everything

Alabama remains in the top spot and moves ever closer to consensus. After Texas A&M nearly lost its undefeated season against Arkansas, the Aggies lose all their No. 1 votes and fall from second to third. Auburn is the only other team receiving first-place ballots, and they pick up just two.

The East-West stratification has grown even more pronounced now; only one team -- Georgia -- breaks into the top half of the conference, while South Carolina drops three spots to tenth. That allows LSU and Arkansas to each move up one place. Missouri zips up from 12th to ninth after defeating the Gamecocks, but Tennessee stays put as Florida drops a peg. Everybody else essentially runs in place for a week.

If you need more evidence of the divisional divide, consider that SEC West teams this week drew an average of 127.4 points, while SEC East teams got an average of 52.6. For now, at least, the West is the best.

Let's see how Junior does against a salty Ole Miss defense.--Get the Picture

I have a feeling by year's end we'll all be wondering "what happened to that Coker guy?"--College and Magnolia

I'll never understand Arkansas trying to become a passing team in the 4th quarter, but coaching matters when you are splitting hairs.--Georgia Sports Blog

Arkansas may finish the season as the best 6-6 team in recent memory.--Red Cup Rebellion

I know the Hogs have two losses, both in-conference and both in-division. There are a handful of teams that wouldn't have two losses versus Texas A&M and Auburn. This team's fronts are tremendous and the running game is vicious. Very tough out for everyone.--Roll Bama Roll' 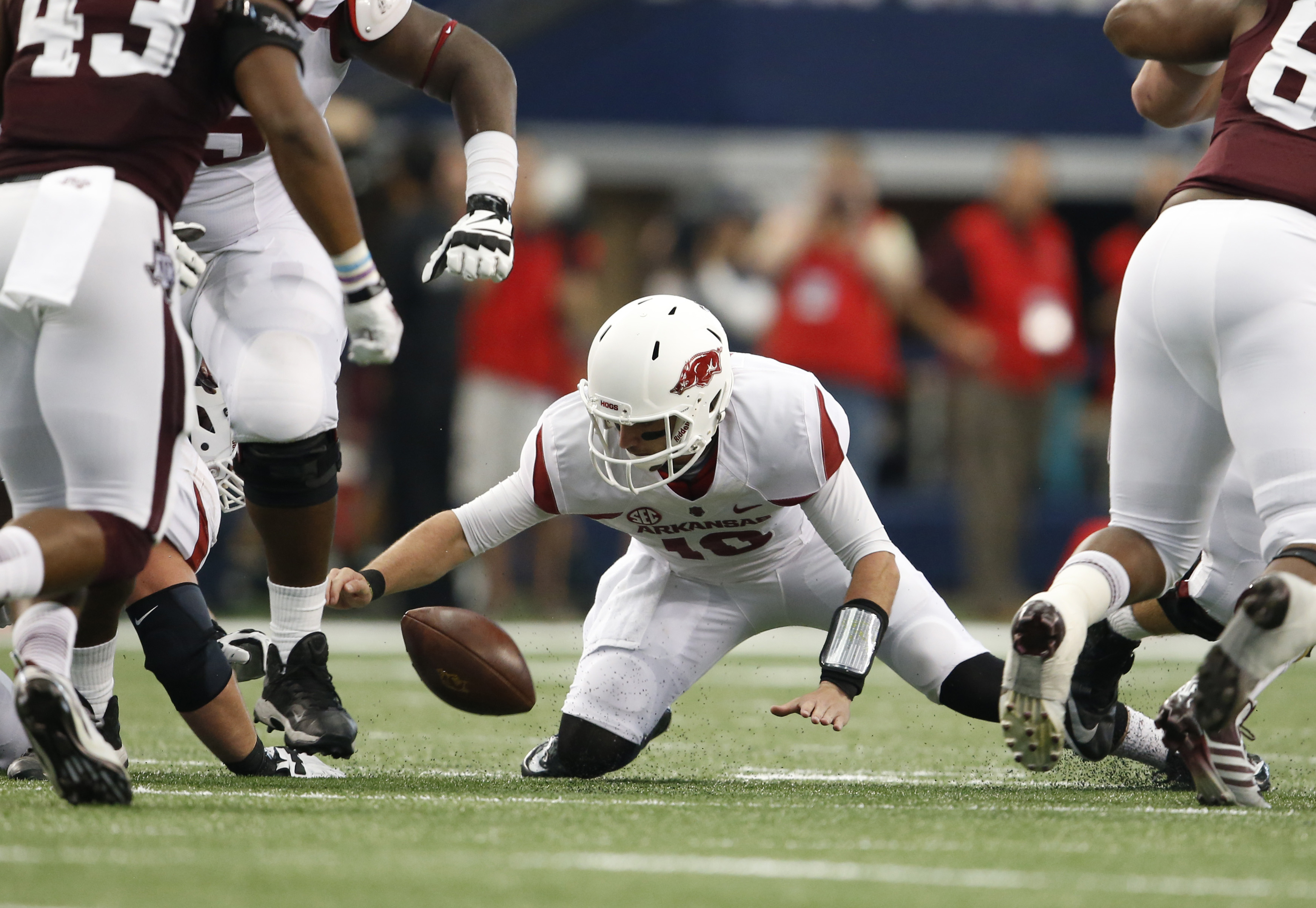 Fast forward several weeks into the future, and we find two quarterbacks lining up next to each other. The center snaps the ball diagonally to one of them, depending upon the play. Two of the linemen are cyborgs, and one receiver is fully robotic.--Rock M Nation

If LSU has found an offensive identity, then they could give Auburn serious trouble this weekend.--Red Cup Rebellion

I still don't trust this team to win a game where they must rely on a still-shaky defense (a defense that has yet to face an offense of note), or a running game that, for all its accolades, is quite pedestrian until the game is out of reach.--Roll Bama Roll

Sad to say, but an off week has been the best thing for those still in Muschamps' camp.--Georgia Sports Blog

Super excited for another hard-fought battle between the Gators and the Vols with a whole lot on the line. Sure, it's at noon, and sure, what's on the line is job security and bowl eligibility, but that doesn't make the first sentence any less true.--Rock  M Nation

I hear Charlie Weis is available to serve as offensive consultant/director of morale.--Dawg Sports

As long as Todd Gurley has two functioning legs, the Dawgs will hang around with teams long enough to win.--Georgia Sports Blog

Georgia is going to need to find something more than Todd Gurley on offense if it wants to win the SEC.--College and Magnolia

A much-needed bye week -- er, I mean Vandy is coming to Athens -- is on tap for the week ahead.--Arkansas Fight

The Cats are one play from 4-0, 2-0- but it's hard to put them any higher than 13th after a lackluster offensive second half and UT's showing against Georgia.--A Sea of Blue

Tennessee this year is Kentucky in one or two. The improvements are definitely noticeable.--Red Cup Rebellion

Congratulations on breaking that horrific losing streak. Even better news on playing in the East, where a cadre of incomplete teams may let you get another!--Roll Bama Roll 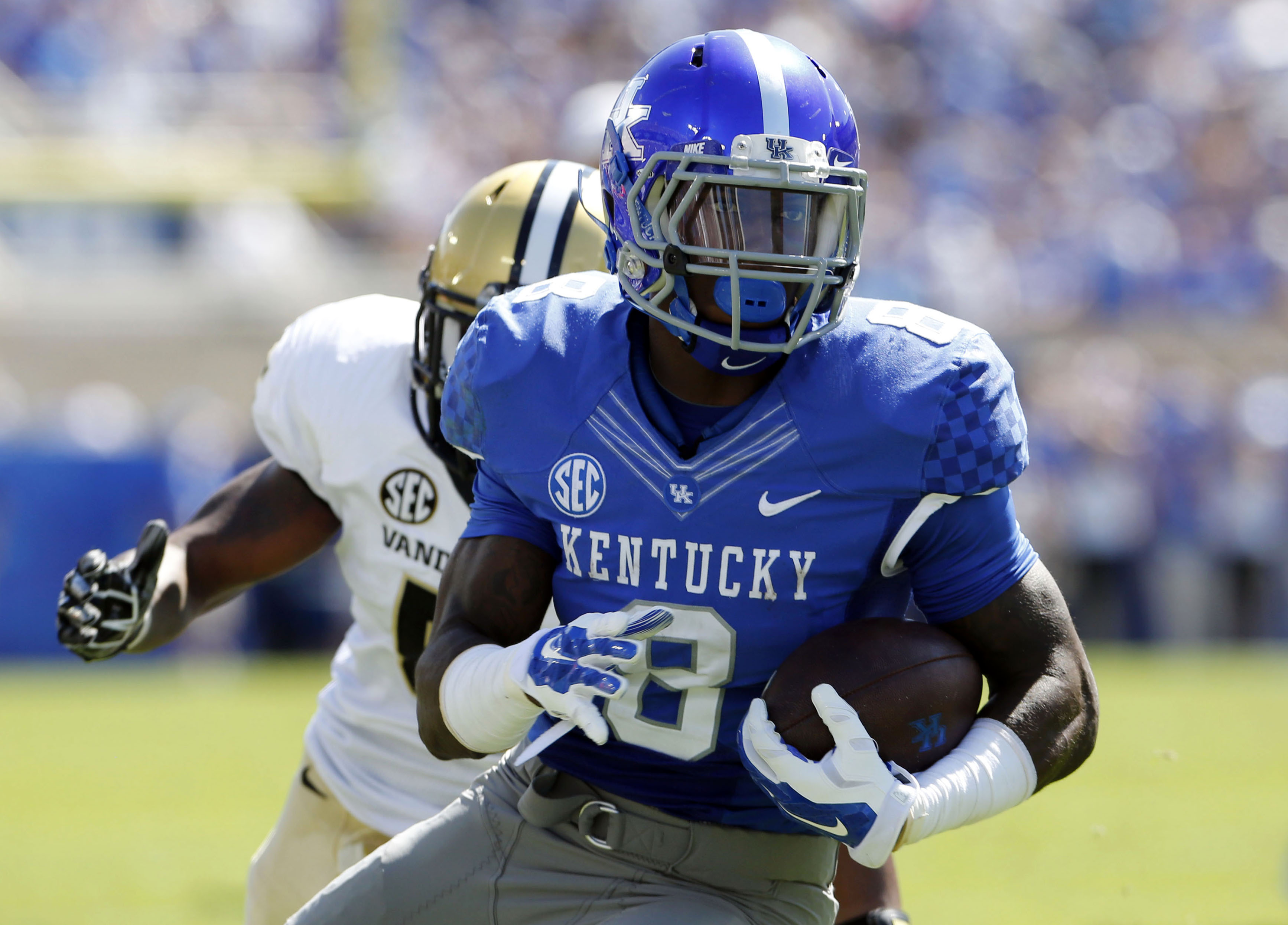 Looks like it's Brandon Harris' time to shine now. Les and company will need him to show out if they want to shake things up in the West.--Rock M Nation

I fear that it's not "if" Leonard Fournette breaks out, but rather "when" and "against whom."--Red Cup Rebellion

Going to a freshman quarterback thus early in the season is never a good sign. The Bayou Bengals will be a lot better in 2015 when their youth movement isn't so d----d young.--Dawg Sports

At least we had a week off from hearing cowbells.--Georgia Sports Blog

We've got ourselves a matchup featuring two undefeated SEC Westerners at noon in Starkvegas. Buckle up y'all, weird football comin'.--Rock M Nation

With Ole Miss flailing about in sloppy wins over Memphis and Boise, and the Bulldogs' dominating win in Baton Rouge, I think you have to consider this the best team in Mississippi. The secondary is set up for a track meet with the Aggies this weekend, though.--Roll Bama Roll

Lose to Indiana at home and best South Carolina on the road.  Sure, sure, that makes sense.--Get the Picture

How Mizzou continues to play below their competition for three quarters and rally to overcome their shortcomings in the fourth is amazing. In two years, the Tigers have beaten every SEC East team.--Arkansas Fight

The East is now set-up for a huge UGA-Mizzou game in two weeks to determine the division. Too bad the Tigers draw Arkansas and Texas A&M out of the West, because the margin of error is slim here. Mauk had perhaps his worst game in a Tiger uniform, but Murphy seems a viable option at TB at least.--Roll Bama Roll 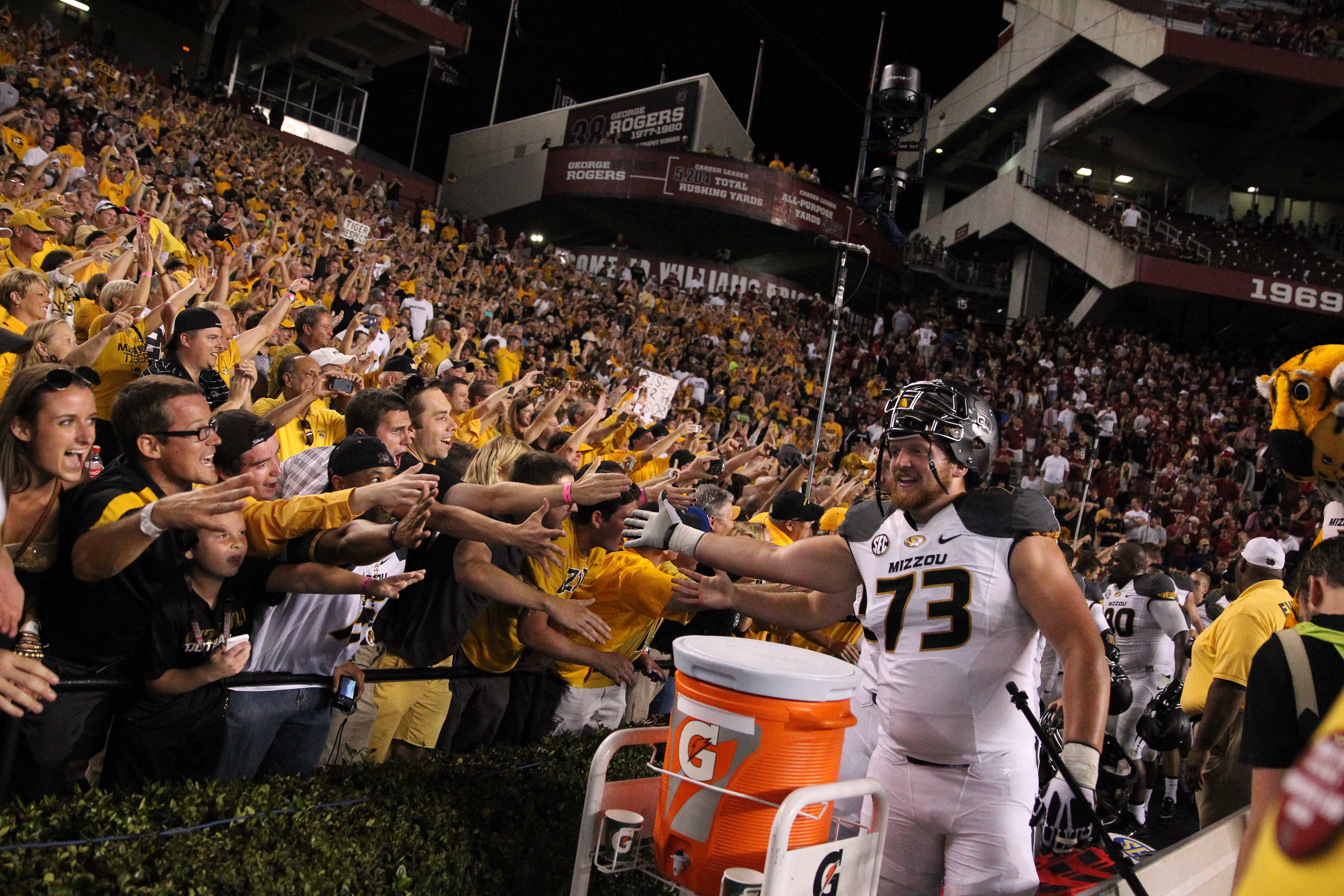 How excited are Alabama and Ole Miss fans for the SEC game of the week? The cheapest seats currently available on Stubhub are $210.--A Sea of Blue

Dr. Bo will be performing an intricate, complicated surgery in front of the College Gameday audience. What could go wrong?--Rock M Nation

Ole Miss has what is arguably the SEC West's best defense alongside the division's worst offense.--Red Cup Rebellion

First, they couldn't stop anybody.  Now, they can't score.  But the 'Cocks are as talented as ever.--Get the Picture

"Hey Steve, how do you feel about blowing a 13-point lead with six minutes to go at home?" Arkansas fan: "I'll take this one for you."--Arkansas Fight

Did the Tigers just have a bad game, or have the Gamecocks finally righted the ship on that side of the ball? I suspect it's the former, and I suspect Clemson, Auburn and even Tennessee are going to be a handful down the stretch.--Red Cup Rebellion

They missed their chance to win a big game this year. They don't match up with any other big name rival the way they matched up with Georgia.--Georgia Sports Blog

The Vols looked strong against the Dawgs, and they have a very real shot at securing a decent bowl this week against Florida. Surely nothing will go wrong; this is the SEC East, after all.--Rock M Nation

This Volunteer team is orange and white and young all over. Only thirteen of the Vols in Athens for Saturday's close loss to Georgia were there in 2012. That's why I think Tennessee may be favored in Athens by  2016. A lot of these kids will only get better.--Dawg Sports 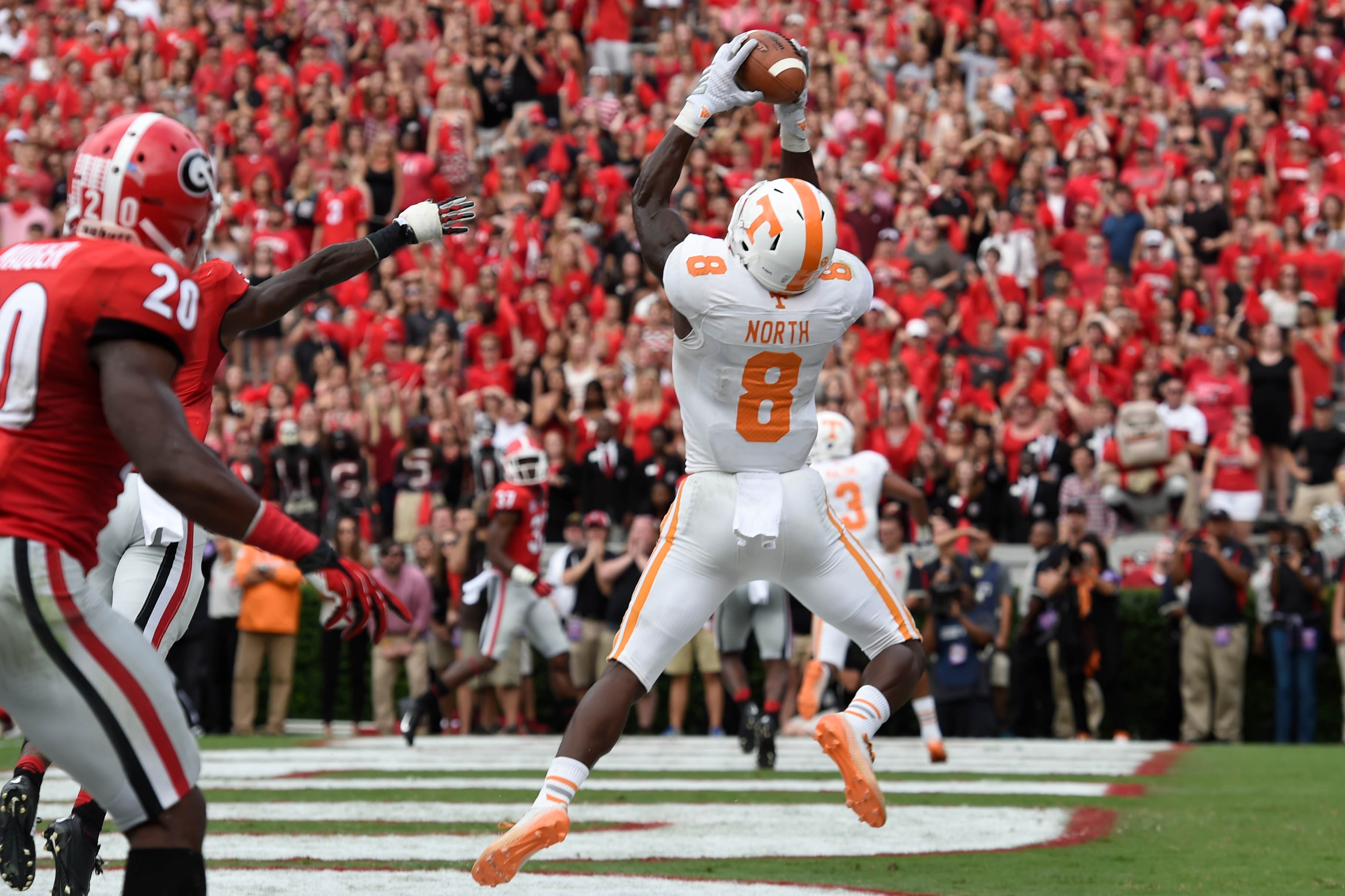 If they can topple the #AllDakEverything offense, the Aggies can prove once and for all that they possess the superior shade of Maroon.--Rock M Nation

Annoying habit of making big plays when they most need them. Lost in the hype of the offense, and how good Arkansas looked, is that the Aggies only allowed 7 points in the second half. Great adjustments.--Roll Bama Roll

You know, I was going to say at least there's a good chance of another win on the schedule.  Then I noticed that Charleston Southern is 5-0.--Get the Picture

I don't remember feeling sorry for an SEC opponent too many times. But it was hard not to feel for Vandy as Derek Mason waived the white flag, watching Kentucky salt the game away with two timeouts left in his pocket. I doubt the 'Dores would have scored an offensive touchdown if the game was extended four quarters.--A Sea of Blue

Seems to be finally developing an offense. It is, unsurprisingly, very reminiscent of ShawBall. The tremendous downside is that transcendent offensive lines aren't built at Vandy. I like the attitude and commitment to toughness, but the 'Dores are three years away from being able to back it up.--Roll Bama Roll