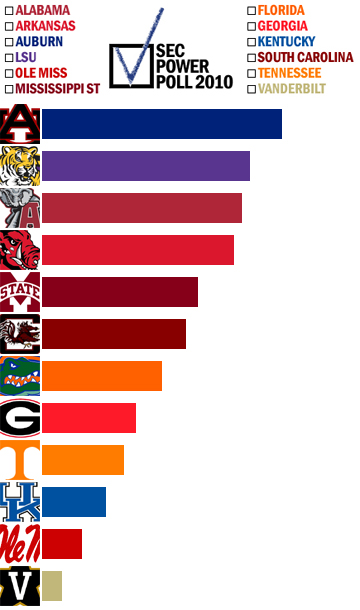 To compare, our first poll had the following rankings:

Well, that was totally wrong reasonably close for an interesting season. Sure, most of the East was about right, except Georgia. On Georgia, we were wrong wrong wrong. And the West was jumbled and generally underrated. No one saw Auburn coming.

But back to our present rankings. Voters?

I fully expect the NCAA to yank away their entire 2010 season sometime in the next 12 to 24 months, but for right now, the Tigers have made it five national championships in a row for the SEC.--Hey Jenny Slater

If you win the national championship, you're the No. 1 team in the SEC. No, seriously, that's how the BCS works, isn't it?--Dawg Sports

Gary Crowton all the sudden looks like an offensive mastermind after his group finally came of age late in the season.--Garnet And Black Attack

When healthy, this was the best defensive team in the country.  The Tide put on the most dominating performance of the postseason in their crushing win over Michigan State.--Get the Picture

The 2010 Tide basically had the same season as the 2008 Bulldogs, only with a much more convincing bowl win over Michigan State.--Dawg Sports

Ryan Mallet reminds me way too much of Ryan Leaf. I don't mean that entirely as a bad thing, as Leaf was a fantastic college QB. Great arm, but he always seems good for one complete mental breakdown per game.--And The Valley Shook

If Dan Mullen was willing to stay in Starkville even in a year when the Florida job came open, then he may just be in it for the long haul -- which is very good news for the Bizarro Bulldogs and very, very bad news for the rest of the SEC West.--Hey Jenny Slater

Rich Rodriguez was fired, Urban Meyer resigned, and Mark Richt is on the hot seat. Is there now such a thing as being "Mullened"?--Dawg Sports

The 'Cocks finally broke through the glass ceiling and claimed their first-ever SEC East title, and yet when you look at how their last two games went, it still doesn't feel like that much of a breakthrough for them.--Hey Jenny Slater

Well, they finally won the division. A lot of pieces come back, so now it's time to sustain success.--And The Valley Shook

Hard to believe this bunch was rated in the top four in the preseason polls.--Get the Picture

I'd give anything for this not to be true, but given the Dawgs' consistent downward trajectory over the past three seasons, my prediction is that Mark Richt will not be the coach of the Georgia Bulldogs 365 days from now.--Hey Jenny Slater

Even without AJ Green, Georgia should be able to capitalize on the weak SEC East next season.--Red Cup Rebellion

Derek Dooley is the poster boy for illegal participation.--And The Valley Shook

The first season of Derek Dooley's rebuilding project in Knoxville showed some promise. Next year, the Vols' goal is to win every game in which they hold a lead when time expires.--Dawg Sports

At a time when a step forward was quite doable, Joker Phillips ended up with a run-in-place kind of season, and it's hard to come up with a tangible reason why things will get any better for the Wildcats anytime soon.--Hey Jenny Slater

A typical Kentucky year.  Quietly make a bowl game that no one watches against a team no one cares about.--And The Valley Shook

The SEC West had perhaps it's best year ever.  Then there was Ole Miss. --And The Valley Shook

It turns out that the mascot fiasco was the least embarrassing disaster for Ole Miss athletics in 2010.--Dawg Sports

About what you'd expect from a Vandy team with a homey interim coach.--Garnet And Black Attack

In classic Ole Miss fashion, Robbie Caldwell's only SEC victory is and forever will be against the Rebels...--Red Cup Rebellion