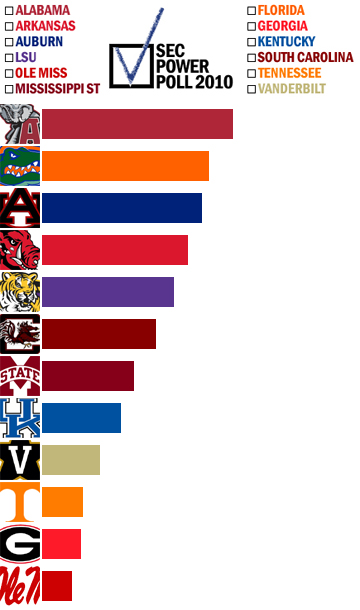 Just to cut down on the Chris Rainey-style comments from Alabama fans: An Alabama voter was the one that gave Florida its first-place vote. I doubt this will continue if the Tide wins next week.

We have some tiering in this poll, but not much; it is notable that Auburn is in a good position to take the No. 2 place if Florida loses this weekend (or maybe even if Alabama loses this weekend, depending on the circumstances).

The two "everyone saw them as surprise" teams of 2010 -- Arkansas and South Carolina -- fall two and three spots, respectively, in this week's poll after their first losses of the year. Florida is back in more familiar ground after annihilating Kentucky and LSU holds steady despite another win over a BCS team -- giving them more of those victories than any other team in the conference. Mississippi State and Vanderbilt each advance two places thanks to losses by Kentucky and Georgia and the Vols -- spirited? -- game against UAB. But even Georgia cannot yet overcome the trainwreck that is Ole Miss, despite the Rebels' 55 points against Fresno State.

Started showing the first cracks in their supposed invincibility against Arkansas -- and yet that young, inexperienced defense still managed to make every big play when they absolutely had to. The proposition that they're not actually the best team in the country is a little stronger now, but I'm still not convinced it's the winning case.--Hey Jenny Slater

I got my hopes up for a few minutes ... and then I remembered it's Bama and that it is against the rules for them to lose. This team is great even when it plays poorly.--And The Valley Shook

Darth Saban's Death Star of a team is most definitely fully operational.--Arkansas Expats

Florida's performance on Saturday makes me wonder if the Gators were just playing coy until they absolutely had to with Alabama next week.--The ACC and SEC Blog

That new wildcat of yours sure is neat, Florida. You know who defends those really well? Nick Saban.-- Red Cup Rebellion

The Gators defense can stack up to anyone, even with the inconsistent pass rush. The problem is an offense in which John Brantley is missing too many open receivers and getting saved on high passes by a rejuvenated Carl Moore.--Alligator Army

Exciting game, exciting win for the Tigers against a quality South Carolina team. The Tigers are quietly plodding toward a defacto SEC West Championship game in the Iron Bowl.--Over the Pylon

Either Auburn has the most uplifting crowd in the country or the Tigers are the best conditioned team in the nation.  I didn't think the Tigers could do it again after playing a very physical game the previous week.--The ACC and SEC Blog

Even as someone who wasn't even remotely buying Arkansas in the preseason, I gotta say there's not that much shame in losing when you still managed to lead the #1 team in the country for all but eight minutes of the game.--Hey Jenny Slater

Look on the brightside, Ryan Mallett; Todd McShay will probably make you the 2010 Jevan Snead.--Alligator Army

Had Bama on the ropes but Mallett decided to end his Heisman chances and let them come back.--Leftover Hot Dog

Hey Les, they were booing Jordan Jefferson, not you. Ok, they were probably booing you too.--The ACC and SEC Blog

The Ole Ball Coach sure picked a strange time to send a message to Stephen Garcia.--Get the Picture

Marcus Lattimore had four touches in the second half against Auburn. It doesn't matter which QB the Gamecocks use when your best player is shutout by your play calling.--Alligator Army

State finally gets an actual win instead of an almost win.--And The Valley Shook

They've got an SEC win. Granted, it's over the worst Georgia team in a generation, but it's still better than a few teams in this poll can say.--Red Cup Rebellion

On pace to beat Florida in about 2074.--Arkansas Expats

Oh, that's why the ‘Cats didn't play anyone for the first three weeks! Is it basketball season yet?--Dawg Sports

Looked good in their bye week.--Get the Picture

Of the bad teams in the SEC, at least Vandy works hard. Georgia has 10 times the talent and half the effort.--Alligator Army

Taking the weekend off was a darned fine idea. I wish we'd thought of it.--Dawg Sports

Saban lost to UAB in his first season at LSU, so by that metric, Dooley is ahead of the curve.--And The Valley Shook

Did you watch that exciting Conference USA battle in Knoxville last Saturday? Uh, wait a minute ...--Get the Picture

Ease off of the UAB kicker. He never knew anyone would ever have to rely on him for anything.--Red Cup Rebellion

The Bulletin of the Atomic Scientists regrets to inform you that they have advanced the Mark Richt Job Security Doomsday Clock to four minutes to midnight.--Hey Jenny Slater

Three straight losses to open SEC play is simply unforgivable. And the coaching search in the offseason for UGA is going to be a sideshow unto itself. Remember, Georgia, Steve Kragthorpe is indeed available.--Over the Pylon

Don't bother going to the store because all the milk and bread are gone from the shelves in Athens. Start building the fallout shelter. UGA is 0-3 in the SEC.--The ACC and SEC Blog

Yeah, I don't get it either.--And The Valley Shook

Thank you for not embarrassing the SEC this week.--The ACC and SEC Blog

Starting to get some traction with the running game coming around. On the other hand, that secondary looks horrible.--Get the Picture