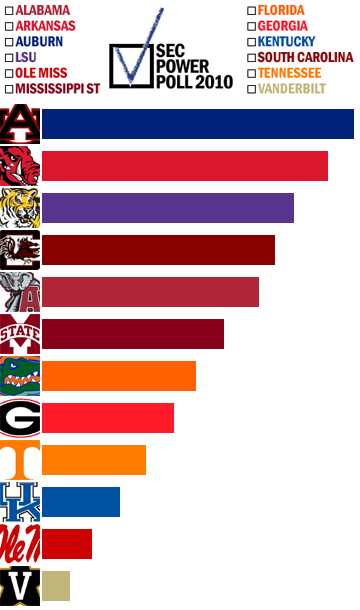 Your last place votes in the last power poll of the regular season go to Vanderbilt (12) and Ole Miss (one, from an Ole Miss blog). In addition to Auburn appearing at No. 1 on every ballot, the unanimous teams were Arkansas, Mississippi State, Tennessee and Kentucky.

Most of the re-ordering takes place at the top, where Arkansas goes from fourth to second and South Carolina passes a falling Alabama to move to fourth. Beyond that, Tennessee and Kentucky switched places, which seems fair when you take into account that this is a power poll and the Vols beat the Wildcats on the field and stuff.

For his next trick, Cam Newton will spot South Carolina a 50-0 lead, then lead his team to eight straight TDs in the 4th quarter.--Arkansas Expats

I have never seen a team make so many halftime adjustments that work in one season as Auburn has done this year.--The ACC & SEC Blog

Am I the only one who is starting to think of this Auburn team as the college football equivalent of the 1997 Florida Marlins, who didn't so much win the national championship as rent it for a season?--Dawg Sports

Arkansas was certainly no 2010 version of 2009 Ole Miss. Unfortunately for the Hogs, though, they picked the wrong year to have a great team.--Garnet And Black Attack

Mallett has just thrown for another 80 yard TD pass against LSU's secondary.--And The Valley Shook

In my humble opinion, this team is now better than they were when Auburn beat them. I'd rather see this rematch instead of the AU/USC one.--For Whom The Cowbell Tolls

Fitting that LSU would get effectively knocked out of a BCS bowl by a loss in which they were out-Miles'd. Guess we now know their good luck has a ceiling.--Hey Jenny Slater

Despite a ton of adversity early in the season, Les Miles and company prove once again they're still SEC elite.--For Whom The Cowbell Tolls

The biggest mismatch in the SEC Championship Game might be Spurrier vs Chizik. Not a fair fight.--Arkansas Expats

Closed with a great November, which is unusual for the Gamecocks.  The Chicken Curse may indeed be dead.--Get the Picture

You wanna bet Steve Spurrier sticks with Stephen Garcia the whole game this time against Auburn and doesn't throw in a true freshman?--The ACC & SEC Blog

Hard to pinpoint just exactly where they went wrong this year, but the running game sure underwhelmed down the stretch considering that it had a Heisman Trophy winner and a guy everyone said was better than him.--Hey Jenny Slater

Whatever your position is on the choice of pregame music, it should be noted that nobody was surprised. Rammer Jammer has conditioned everybody to it.--Rocky Top Talk

For all of the legitimate talk about their good year, they are still 5th in the West. Which is good for a top 25 ranking.--And The Valley Shook

MSU better take care of Coach Mullen as he is a miracle worker, it seems.--Leftover Hot Dog

The Gators just want this season to end as soon as possible.--Garnet And Black Attack

I'm loath to call the Urban Meyer dynasty over after one crappy season, but with the Gators having emphatically ceded in-state superiority back to FSU, a Gator Bowl berth on the horizon, and Steve Addazio appearing to be completely secure in Gainesville, you gotta hear the clock ticking.--Hey Jenny Slater

Look on the bright side Urban; the upcoming weekend will be much better on your health this year.--For Whom The Cowbell Tolls

And now whether Richt chooses to leave is the story. That's a nice change of pace.--Over the Pylon

At least the ‘Dawgs have a stranglehold on the state championship. Well, until Mercer gets its football program up and running, anyway.--Dawg Sports

The season played out just exactly like everyone said it would, and now Derek Dooley has a chance to finish with the same record Lane Kiffin did in his lone season in Knoxville. (Kiffin: "All part of my master plan.")--Hey Jenny Slater

Vols played a little rope and dope this year, it seems.--Leftover Hot Dog

Clearly, the key to being successful in November is to develop year-end rivalries with teams that suck.--Dawg Sports

This season ended up looking like a lot of past ones for UK. Lots of wins over cupcakes, one signature upset over a good SEC team, a win over Vanderbilt, and not much else.--Garnet And Black Attack

They were one Marcus Lattimore injury away from having a completely forgettable season.  Not an auspicious start for Joker Phillips' head coaching career.--Get the Picture

Another year, another loss to Tennessee. Shocker.--Over the Pylon

Houston Nutt has been linked the Ole Miss Rebels job though sources say he was not interested on Saturday night.--The ACC & SEC Blog

I think it's all been an elaborate conspiracy to defame black bears. Personally, I blame racist white bears.--Dawg Sports

It's been a season of disappointment and regret for the Rebel Black Bears. Then again, maybe that regret part belongs solely to Jeremiah Masoli.--For Whom The Cowbell Tolls

As much as I like Robbie Caldwell's story, you can't exactly blame the Vandy administration for not having any interest in keeping him on.--Hey Jenny Slater

Fitting that the turkey breeder would just make it to Thanksgiving. We hardly knew ye.--Rocky Top Talk

The Commodores should hire Mike Leach. They have to do something no one else in the league is doing to consistently compete.--The ACC & SEC Blog