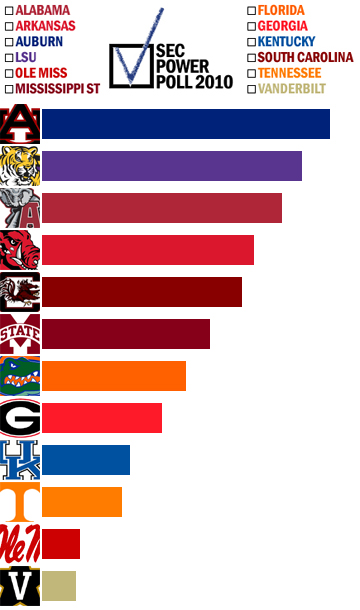 Your last-place votes go to Ole Miss (5) and Vanderbilt (7), indicating that Tennessee will very well not end up last this year.

South Carolina moves to No. 5 in the poll, past Mississippi State and Florida, which both lose. Tennessee moves past Ole Miss, which only seems fair after the Vols annihilated the Rebels. There's also more stability in the poll this week; Auburn is a unanimous first-place team, and there's also total agreement on Nos. 5, 6, 7 and 10.

Special season for the Tigers, one that I hope doesn't end up 0-0 with asterisks galore.--Over the Pylon

Driving full speed ahead toward the edge of the NCAA cliff, Thelma & Louise-style.--Arkansas Expats

Is this what the SEC was like back in the day? Or was there more money involved?--Alligator Army

It would take craziness for the Tigers to compete for the national championship without playing for the SEC title, but craziness and Les Miles go together like peas and carrots.--Over the Pylon

I continue to be astonished by the fact that the Bayou Bengals have won nine games (and counting) under the guidance of a man whose whole coaching philosophy appears to have been cribbed from Curtis Armstrong's character in "Risky Business."--Dawg Sports

Has the Iron Bowl lost a bit of its luster now that Bama is out of the national-title picture? Not when the Tide still has an opportunity to tell the Tigers "We run this state" -- and stomp on the throat of their championship hopes in the process.--Hey Jenny Slater

I like how Nick Saban flipping out on a backup redshirt freshman is somehow celebrated as a teaching moment. I'm sure at clinics this summer, coaches will be taught the proper way to embarrass your player on national television.--Alligator Army

I have to confess that the Hogs' season grows more impressive as it goes on. They still have an outside shot at a BCS game.--Get the Picture

Since scoring 24 points against Texas A&M, the Hogs have scored an average of 45.8 points per game in the five games since.--Alligator Army

Geographic happenstance is all that prevented the Hogs from winning the SEC East.--Dawg Sports

Congratulations to the Gamecocks on winning the SEC East - also known as "5th place in the SEC West."--Arkansas Expats

Elite players like Alshon Jeffrey and Marcus Lattimore will help break any curse. Even one of the Chicken variety.--The ACC and SEC Blog

I have to admit that I didn't see that coming. In my defense, though, "a South Carolina squad apparently entering its annual November swoon soundly defeating an ostensibly resurgent Florida team in Gainesville with the division title on the line" is unprecedented on, like, eleven different levels.--Dawg Sports

There's only so much magic Dan Mullen can work without a competent passing game.--Get the Picture

Dan Mullen is laughing at the Gators.--Leftover Hot Dog

If you're taking the SAT, and you get the analogy "George O'Leary : Ralph Friedgen :: Urban Meyer : ________," the correct answer is "Dan Mullen." Coach Mullen is the conference coach of the year, and it isn't a close call.--Dawg Sports

John Brantley is now ranked tenth in the conference in passing efficiency. All you pundits who called him the second best quarterback in the SEC last season can turn in your credentials at the front desk.--Get the Picture

Urban Meyer hates to lose and I think losing to Steve Spurrier, the guy who built the Florida program, is at the top of that list.--The ACC and SEC Blog

One of these days they'll figure out how to neutralize a mobile QB, but it looks like that day might not be until next season.--Hey Jenny Slater

If Georgia loses to Tech, that'd be 0-fer against their rivals. I wonder when that happened last.--Red Cup Rebellion

Bulldogs must beat Georgia Tech to keep their 13 year bowl streak alive. That statement should never happen at UGA.--The ACC and SEC Blog

I'm not telling you anything you don't know, Wildcats, but now's a bad time to be facing Tennessee if you're hoping to break that quarter-century losing streak against them.--Hey Jenny Slater

Struggled with Vanderbilt in becoming bowl eligible. If that doesn't sum up the Cats' season, I don't know what does.--Get the Picture

Still floating on that SC victory, I see.--Red Cup Rebellion

It is only appropriate that Tennessee finds some sort of motivation and performance right before the Kentucky game. That's super.--Over the Pylon

Maybe Derek Dooley should have gone to Tyler Bray earlier. Hindsight has never been wrong.--The ACC and SEC Blog

Vince Dooley won six regular-season games in his first season at Georgia in 1964, and he followed that up with a bowl victory. Like father, like son.--Dawg Sports

Since Jevan Snead is pumping gas somewhere, the Rebels should be allowed to bring him back for their last two games.--Alligator Army

Remember when Tyrone Nix was one of the hottest Defensive Coordinators in the SEC?--The ACC and SEC Blog

In a season where very little in the SEC has looked the way we expected it to, the Commodores have been refreshingly familiar.--Hey Jenny Slater

Only SEC team that cannot get to bowl eligible. That's not the exclusive club that you want to be in.--Over the Pylon

Why is Vanderbilt discussing a contract with Robbie Caldwell?--The ACC and SEC Blog