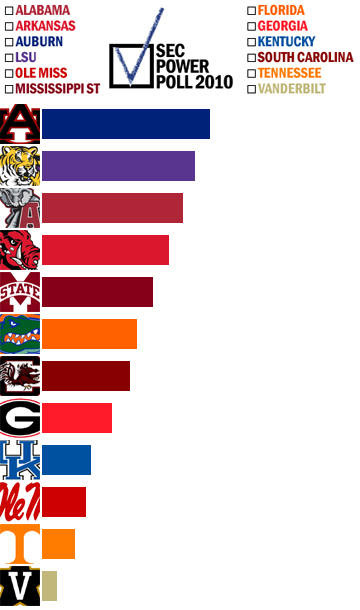 Your last-place votes go to Tennessee (1) and Vanderbilt (13).

The obvious themes here: All but one SEC West teams go before all of the teams in the East. Not that either Florida or South Carolina is going to decline the division, but the game this Saturday lacks a bit of punch, no? The last two spots also go to teams from the East, so it's not like the division can brag about its depth.

Boy, Nick Saban's total dominance in the state of Alabama sure doesn't look like it's gonna last nearly as long as we all thought, does it?--Hey Jenny Slater

An Auburn booster paid us $200,000 to rank them here.--Arkansas Expats

Contrarian word of warning: Les Miles is being hailed now, but he's still the guy who looked utterly clueless at the end of the Tennessee game (and against Ole Miss last year, etc, etc).--Arkansas Expats

Auburn will lose to Georgia and Alabama, and LSU will run the table, win the SEC and win the National Championship. No one is stopping Les Miles this season.--Alligator Army

"THEY WAS DISTRACTED BY ALL THAT CAM NEWTON TALK, PAWWWLLLL!!!!"--Get the Picture

To be fair, who knew that LSU would go for it on 4th?--Rocky Top Talk

Who would have thought this statement could be true back in August: Alabama's only hope for a good season is to ruin Auburn's.--The ACC and SEC Blog

If they're pissed to be basically out of the SEC West race, they're doing an awfully good job of making sure nobody else gets to enjoy themselves, either.--Hey Jenny Slater

A dominating win over the Gamecocks in Columbia is legitimately shocking. Well done, Razorbacks.--Red Cup Rebellion

Word is that Bobby Petrino is trying to get Arkansas to leave the West Division in mid season and finish in the East.--The ACC and SEC Blog

Still very much in the running for a 10-win season, which even the staunchest members of the "Dan Mullen is really gonna get this thing turned around in a hurry" fan club couldn't have predicted.--Hey Jenny Slater

The most unassuming and unheralded 7-2 team I can remember. They're so good they can focus on the recruitment of players that don't even go there. That's talent.--Over the Pylon

The best team in the East (or are they?) would be, at best, middle-of-the-pack in the West. S-E-C-West! S-E-C-West!--Red Cup Rebellion

Chris Rainey should never be allowed to own a texting capable phone again. Gators are a different team with him.--The ACC and SEC Blog

Deep down, we always knew the Sunshine State Saurians were going to cruise to a first-place finish in the SEC East. We just didn't know that achieving that feat would be less impressive than winning the Big 12 North.--Dawg Sports

In Columbia, the saying goes "death, taxes and November."--Get the Picture

Despite the presence of Marcus Lattimore and his NFL ability, South Carolina is 72nd in rushing offense (147 yards per game). That is 9th in the SEC.--Alligator Army

If, at the beginning of the season, you offered South Carolina fans the option of having this upcoming game as a 'win and you win the East' game, they'd have taken it in a heartbeat.--Rocky Top Talk

Fighting for bowl eligibility in Week 11 is not how the story was supposed to go this season.--Get the Picture

Georgia proved beyond any doubt that they are better than 1-7 Idaho State.  Mark Richt must be bubbling with pride, and as a bonus, nobody got arrested this week.--A Sea Of Blue

Can the Bulldogs re-create the magic of their 2006 upset of a highly ranked Auburn team on the Plains?--The ACC and SEC Blog

Good chance at a bowl game, which pretty much defines success in Lexington.--And The Valley Shook

The Wildcats will beat Vandy Saturday, and set up the Awful Bowl against Tennessee for the SEC's worst bowl bid. Hello Birmingham!--Alligator Army

The Fighting Randall Cobbs are far from unflawed, but wins over Tennessee and Vandy put the Cats in a decent Bowl.--Over the Pylon

A season in which their mascot argument has been more interesting than the football.--And The Valley Shook

Not looking bowl-worthy at this point.--A Sea of Blue

The whole "2-6 start with a 4-0 finish" sounded perfectly plausible in the preseason, and even that started looking pretty shaky a few weeks ago -- but now the needle seems to be headed back toward "plausible" again.--Hey Jenny Slater

It's our win and you can't say ANYTHING that will make it any less enjoyable. That, and we're in full 'WOO NFL LASER ROCKET ARM WOO!!1' mode, so don't even try.--Rocky Top Talk

The Volunteers will be fine until all 175 lbs of Tyler Bray actually gets hit.--The ACC and SEC Blog

En route to getting waxed by Florida (109 yards of total offense!), word gets out to the media that Vandy is negotiating a new contract with Robbie Caldwell.  America is a great country.--Get the Picture

Vandy versus Florida. Who do you think would win that? Three guesses, and two don't count.--A Sea Of Blue