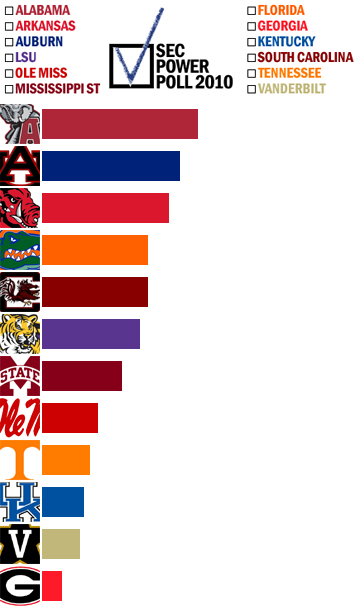 Every team except Alabama and Mississippi State moved: Auburn moves up to No. 2 from No. 3; Arkansas also moves up one; Florida drops two; South Carolina leaps past LSU; LSU, of course, falls one; Ole Miss goes from 12th to eighth with the win against Kentucky; Tennessee moves up one while Vanderbilt moves down; and Georgia takes over last place by dropping one spot.

Urban Meyer is probably wishing his retirement had lasted at least through last weekend.--Arkansas Expats

I think the Tide might be a slight favorite against the Buffalo Bills right now. --The ACC & SEC Blog

Have passed what are easily the biggest tests they'll face until a season-ending showdown with Auburn that could be very, very fun to watch.--Hey Jenny Slater

They really showed UL Monroe who is boss.--And The Valley Shook

Seriously, am I being punished for something? It's hard to interpret Georgia being bad and a Gene Chizik-coached rival being good at the same time as anything other than malevolent forces in the universe conspiring together to make everything intolerably awful at once. I hate Auburn.--Dawg Sports

Keep rooting for the Tigers to do well, rest of the SEC -- the better they do, the sooner Gus Malzahn gets hired away for a head-coaching job.--Hey Jenny Slater

Their close loss to Alabama suddenly looks like a pretty fantastic performance.--Garnet And Black Attack

Mallet is both the best and worst quarterback in the SEC.--And The Valley Shook

The Hogs' best win was a loss to ‘Bama. The Razorbacks' actual victories are pretty much meaningless, unfortunately.--Dawg Sports

The Gators have the talent to be much better than this, but Urban Meyer and his offensive staff's inability to make proper schematic adjustments when the personnel doesn't fit their offensive philosophy (i. e., when Tim Tebow isn't on the roster) is going to hold the Gators back this year.--Garnet And Black Attack

Gator fans should take solace that they still have a great chance to get a rematch with Alabama, if they still want one.--The ACC & SEC Blog

Has any year's SEC Championship Game ever looked less exciting? At this point, all we have to look forward to is a rematch (and, most likely, a re-play) of the Gators' drubbing in Tuscaloosa. You always want to be cautious about making sweeping statements like "The West Division has completely eclipsed the East in terms of competitiveness," but for this season, at least, it happens to be entirely true.--Hey Jenny Slater

If they want to win the East, a win Saturday night would be a huge step towards that.--Get the Picture

If South Carolina plays mistake-free football, they can knock off the Tide. Remember, turnovers ultimately doomed them against Auburn, not perceivedly inferior football.--Red Cup Rebellion

The Palmetto State Poultry are the only SEC East team that did not lose last weekend. I'm almost positive the Book of Revelation contains a reference to such an event as a sign that the end times are upon us.--Dawg Sports

Might be the worst 5-0 team ever. But on the bright side, Les Miles is HILARIOUS.--Arkansas Expats

It's hard to remember when a coach lost more credibility for a win than what happened to Les Miles on Saturday.--Rocky Top Talk

Nothing could surprise me in an LSU game anymore.  I'm waiting for someone to get abducted by space aliens in the middle of a play.--And The Valley Shook

Trying to make a serious run at third place in the SEC West.--Leftover Hot Dog

Rebels fans, if you didn't already know your team was being coached by Houston Nutt, now you know. The good news is that this team seems to have found a sense of offensive identity and will probably be decent from here on out.--Garnet And Black Attack

How long am I supposed to keep holding that J-State loss against them? What's the protocol there?--Anchor Of Gold

Far, far better over the last couple weeks than the first couple.  Not that it was a high bar to clear.--Rocky Top Talk

The Vols could be a force is they could play with 13 men all the time.--Leftover Hot Dog

Apparently, it is the refs' fault Dooley can't count.--And The Valley Shook

Those blowouts against cupcake competition seem very far away now. The 'Cats have some nice offensive weapons, but Mike Hartline is mistake-prone and the defense is bad.--Garnet And Black Attack

Sugar-induced coma after all those cupcakes...--Anchor Of Gold

For all the progress this program made under Rich Brooks, the fact remains that beating Kentucky doesn't make you good, but losing to Kentucky makes you bad.--Dawg Sports

Well, maybe Vandy will keep Robbie Caldwell around as a spokesman. I don't think he will be head coach with blowout losses to UConn.--The ACC & SEC Blog

Probably not going to come anywhere near a bowl, but I'm still kind of impressed by how Robbie Caldwell has managed to keep his head above water in a difficult situation.--Hey Jenny Slater

You could have made a lot of money putting down a bet in the preseason that the loser of the Georgia-Tennessee game would be the only team in the SEC without a win over a BCS conference opponent at the mid-season point.--Get the Picture