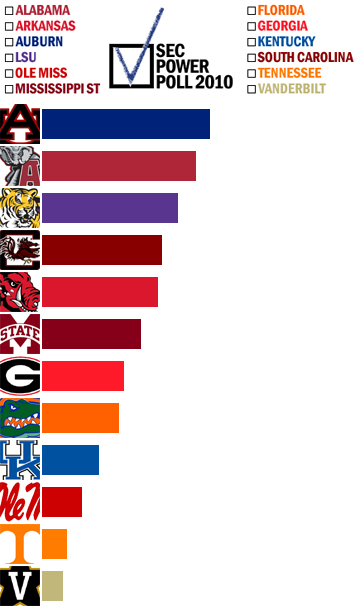 The last-place votes went to Tennessee (5.5) and Vanderbilt (8.5), who have pretty clearly established themselves as the worst teams in the conference.

Auburn is now a unanimous No. 1, which is probably not a surprise given that the Tigers are the only undefeated team remaining. Alabama, which we had all kind of forgotten about in the middle of the Auburn-LSU clash and the death of the East, re-establishes itself as part of the conference royalty with a unanimous No. 2 showing. LSU only drops to third after the defeat against Auburn, while South Carolina is the first team from the SEC East and the only one in the Top 5. That marks a gain of two for the Gamecocks. Arkansas is down one after a game against Ole Miss that was so long some of our voters might have simply fallen asleep. Mississippi State is also down one after defeating UAB by only five points. Georgia is back in the Top 7 after winning at Kentucky, which goes from No. 7 to No. 9 while Florida moves up a spot during a bye week. (Proving that the best way to look good for teams from the East continues to be taking a week off.) Ole Miss, Tennessee and Vanderbilt stay where they are likely to remain until the end of the year.

LSU's passing game is so bad, even Ted Roof could handle it. I'm starting to buy into the "team of destiny" talk; it'll be an epic Finebaum show if the Tigers win the Iron Bowl this year.--Get the Picture

The bigger they are, the harder they fall, amirite?! /no /auburnwillslaughterus--Red Cup Rebellion

Offense seemed to get back on track last weekend, but it was against a Vols team whose defense has really been fading down the stretch. The Tide still have LSU, Mississippi State and Auburn left to go, and I've got a nagging feeling there's another loss waiting somewhere in that bunch.--Hey  Jenny Slater

The Tide finally gets a bye week. Their next opponent, LSU, also has one though.--The ACC and SEC Blog

The Tigers finally ran into a team even Les Miles Mojo couldn't beat, so of course Miles needs to be fired immediately.--Hey Jenny Slater

I actually thought Les Miles did a better job coaching in the loss to Auburn than he did in all of LSU's wins this year.--The ACC and SEC Blog

With all the talent in the South, you should never have two bad quarterbacks. I'm looking at you too, Gators.--Alligator Army

South Carolina bounced back from the loss to Kentucky with a slow but more or less convincing win against Vandy. The 'Cocks will be happy to get Marcus Lattimore back next week, which will hopefully jump start the offense.--Garnet And Black Attack

It's Halloween and South Carolina leads the East. What could possibly go wrong?--The ACC and SEC Blog

It was more of the same for the Hogs in a shootout win over Ole Miss -- plenty of offensive fireworks from Ryan Mallett and company, plenty of defensive snafus from the Arkansas defense.--Garnet And Black Attack

Finally managed to beat Houston Nutt, yet it came despite Ryan Mallett getting outplayed by ... Jeremiah Masoli? Really?--Hey Jenny Slater

We're still waiting the results of Petrino's petition to Mike Slive that all SEC games be limited to the first half.--Arkansas Expats

Bulldogs almost suffered a huge letdown. Last season they lose that game, but not this year.--The ACC and SEC Blog

The Bulldogs play up or down to their competition. Lose by three to Auburn, win by three at Florida, win by five against UAB.--Alligator Army

At least Dan Mullen's club didn't need overtime to get by UAB.--Dawg Sports

No team in the conference has looked more dominant in the last three weeks.  If you could have said something similar about the four games before then, the Dawgs would have something serious going on right now.--Get the Picture

The Bulldogs' offense has scored 15 touchdowns in the last three games. To get to 15 touchdowns for Florida, you have to go back six games.--Alligator Army

This looks like the best .500 club in America right now.--Dawg Sports

Raise your hand if you ever thought people would be saying "I just don't know if Florida's gonna be able to keep up with Georgia on the scoreboard" at this point in the season.--Hey Jenny Slater

Could we possibly see a down and out Florida pull off a team building stunt like the end zone celebration Georgia did in 2007?--The ACC and SEC Blog

This will be perhaps the least (or most, I suppose) intriguing World's Largest Outdoor Cocktail Party in recent memory.--Red Cup Rebellion

Great passing attack, but that's about all.--Get the Picture

The Wildcats have lost games in which they scored 35, 34 and 31 points.--Alligator Army

Houston is focusing all his Nutty upset powers on Malzahn and the Tigers. Can the Black Bears pull off the shocker of the year?--Arkansas Expats

Houston -- we have no defense.--Leftover Hot Dog

Colonel Reb just sent Ole Miss a thank-you note expressing his gratitude for the administration's kindness in not forcing him to be associated with this team any longer.--Dawg Sports

At least Dooley was historically accurate when he was talking about the Normandy invasion.--Alligator Army

May actually need volunteers as the talent level is absent and seems to be getting worse.--Leftover Hot Dog

If Derek Dooley could work out a deal with Joker Phillips to let the Vols play the first half and be replaced by the ‘Cats for the second half, this might be a pretty good football team. At the moment, though, Tennessee is the last SEC squad without a conference win.--Dawg Sports

Raise your hand if you ever thought the Vandy-South Carolina game would be a battle for first place in the SEC. OK, seriously, put your hands down.--Hey Jenny Slater

So much for that "they control their destiny in the SEC East" talk.--Get the Picture