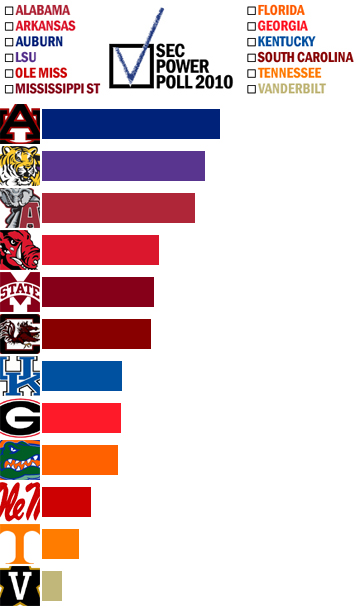 Otherwise, it's the Tigers that lead the SEC. And the Tigers that are second. But once the Tigers lose this weekend, they are certain to lose some ground in the poll. And that could help ... them again. Arkansas moves up one and the Western Division Bulldogs jump from No. 7 to No. 5. South Carolina drops four places and Kentucky is the big winner of the week, moving up four. Florida falls three spots to No. 9 -- which I think might be the lowest they have ever been in the history of the power poll -- and Ole Miss drops one after the loss to Alabama. Tennessee is no longer seen as the worst team in the conference -- a distinction that is now back in Nashville with Vanderbilt.

Maybe it's just me, but "65-43" isn't the first thing that comes to mind when you say "SEC Champion."--Get the Picture

Watching Gus Malzahn's offense in action is like watching old footage of atmospheric nuclear tests: It's almost kind of beautiful and awesome, as long as it's happening far, far away from you.--Hey Jenny Slater

Saturday, we'll find out which is the most powerful force in the SEC:  Cam Newton's legs or Les Miles' karma.--Get the Picture

Jordan Jefferson getting significant playing time is becoming the football equivalent of doing the trick blind-folded.--And The Valley Shook

I didn't follow the McNeese State game. How many fourth-down fumblerooskies did Les Miles attempt from his own five yard line?--Dawg Sports

Greg McElroy's Promise speech was the reason for the Tide's 13 point win over Ole Miss.--Alligator Army

Saban has the machine going again. But is it good enough for the SEC West title?--Leftover Hot Dog

Still not quite sure what's going on with this offense. Even Paul Finebaum has to be concerned that they didn't even drop as many points on a bad Ole Miss defense as Jacksonville State did.--Hey Jenny Slater

This is not where we wanted to be at this point in the season ... we suppose not having a functioning defense or special teams unit will do that.--Arkansas Expats

Given how bad the Razorback defense looked the past two seasons, it's almost kind of comforting that they managed not to have a complete defensive implosion until week 7.--Hey Jenny Slater

I'll admit I got a little confused during all that conference expansion talk this summer, but did the Hogs move to the WAC while I wasn't paying attention?--Dawg Sports

Dan Mullen is a really good coach, but let's hold off on the "he was the sole reason Florida won" talk.--The ACC and SEC Blog

Dan Mullen wishes he could move his team to the SEC East.  MSU is doing the more with less thing better than any team in the conference.--Get the Picture

Saturday's loss to Kentucky captured the last 100 years of South Carolina football in one game. A chance to put the nail in the coffin only to throw it away.--The ACC and SEC Blog

18 years in the conference, one week of relevance.  Way to go, 'Cocks.--Roll Bama Roll

Steve Spurrier better hope that the Kentucky game was just a post-upset hangover and not something more. We're all well acquainted with the script this team typically follows in the second half of the season.--Hey Jenny Slater

Kentucky may yet win the East. Too bad their fans would be too wrapped up in basketball to even notice.--Rocky Top Talk

Are they the Tampa Bay Rays of the SEC? Randall Cobb pulled a David Price and ripped the home fans for not supporting them in their defeat of South Carolina.--Alligator Army

Great win, guys, but there's only so glad you ought to be to be 1-3 in SEC play.--Dawg Sports

"Operation Save Richt" is in full effect.  Hate to play them right now as they seem pissed.--Leftover Hot Dog

Well, they look a lot better now that they are playing the SEC's bottom dwellars.--And The Valley Shook

In the land of the blind, the one-eyed man is king, or can be, even if he lost to Mississippi State and Colorado in back-to-back weeks.--Hey Jenny Slater

Seriously, Gators, how do you lose a game to a team that wasn't even trying to score in the second half?--Get the Picture

Before this season, the Gators had only been held to single digits on the scoreboard six times in the previous 19 years. It's now happened twice in the span of three games.--Hey Jenny Slater

Jeremiah Masoli was 18-of-40 for 110 yards against Alabama. Apparently, Masoli is Hawaiian for "Jevan Snead."--Alligator Army

The Rebel defense finally decided to join the rest of the team for this season.--Red Cup Rebellion

Black Bears are now disappointed they have to represent this school.--Leftover Hot Dog

I think Derek Dooley is hoping his old boss takes it easy on him this week.--The ACC and SEC Blog

The Vols will use their famous 13-man defense to defeat Bama on Saturday.--Alligator Army

It's gotten to the point that the best way to make yourself look good in the SEC East is to take the weekend off.--Dawg Sports

Vandy didn't look they were playing to win Saturday especially after the punted from UGA's 37 on 4th and 2 on their first drive. Vandy fans deserve better than that.--The ACC and SEC Blog

They should be proud to be the best football program in the state.--Over the Pylon

Now may be a good time to consider petitioning for membership in the Mid-American Conference.--Dawg Sports