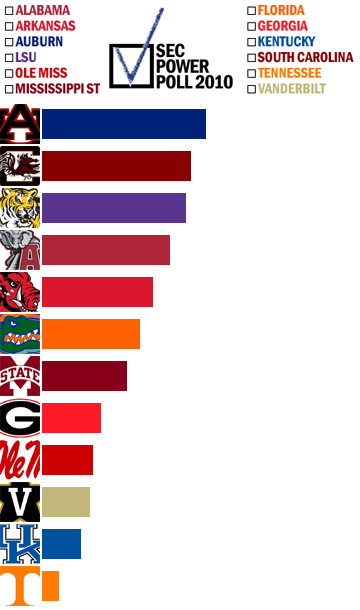 Auburn takes over as the No. 1 team after Alabama's loss to South Carolina, which moves up to second place from fourth. LSU jumps from sixth to third and bypasses Arkansas in the process. That leaves the Razorbacks to fall from third to fifth. Florida is down to sixth from a tie with South Carolina for fourth last week after the loss to LSU. Georgia makes the largest move, zooming up the ballot from last to eighth, causing Ole Miss to go back to ninth on a bye week. After its waxing from Georgia, Tennessee is now last.

Ted Roof's defense is gonna ruin a game for them one of these days, but until that happens, this is a team nobody should want to play. Cameron Newton all by himself vs. your team's defensive starting 11 might still be a tossup.--Hey Jenny Slater

I'm just waiting for the day that somebody offers Malzahn a head coaching gig.  Honestly, I see Auburn as his team more than Chizik's right now.--Rocky Top Talk

Was the close win at Kentucky a sign of a team on the verge of a breakdown or just immaturity? Auburn is nine points away from being 3-3. But in the 2010 SEC, they look like National Championship contenders.--Alligator Army

If they can avoid the November self-immolation that has become every bit as much of a Gamecock tradition as entering the stadium to the music from "2001," they're going to be your SEC East champs. Speaking of self-immolation, after reading back over that comment I think I need to find some matches.--Hey Jenny Slater

Somebody wants that Auburn game back, don't they?--Red Cup Rebellion

If I wasn't a Gator fan, I would have been cheering hard for Les Miles Saturday. That said, UF was outplayed and outcoached for 60 minutes.--Alligator Army

Typical LSU week: Come off a win that has been diminshed by the pundits, have those pundits pick against you, win in crazy fashion, have those same pundits who picked against you tell you that the team you beat wasn't that good and the win isn't really a win. Repeat.--And The Valley Shook

Some too close for comfort wins versus the weak SEC East has many wondering if their good luck so far is about to catch up with them.--Anchor Of Gold

Bama has the defending Heisman winner and a running back who was on Sports Illustrated this season. But against South Carolina, they got only 17 carries. Apparently, Bama was the only team that didn't realize Greg McElroy is overrated.--Alligator Army

Tide fans now have to deal with the unimaginable tragedy of actually losing a game.--Arkansas Expats

With the game on the line in Columbia, Steve Spurrier went for it on fourth down and Nick Saban punted. The coach who played to win, did; the coach who didn't, didn't. The Armani Bear got outcoached by the Evil Genius. That fact stings the defending national champions even more than the loss.--Dawg Sports

The Hogs' offense has settled into a pattern of fading in the second half.  So far that's only cost them one game.--Get the Picture

Both TAMU and Arkansas sorta sleepwalked through that one. It's probably best that much of America was distracted by other games during that timeslot.--Red Cup Rebellion

Ryan Mallett had 310 yards of passing, but it was the defense's four takeaways that won the game against Texas A&M.--Alligator Army

Not much new you can say about them, even after the LSU loss. Tim Tebow's departure was a big blow; Dan Mullen's may have proven to be the even bigger one.--Hey Jenny Slater

You know who else exhibited loyalty to a fault?  Fulmer.  Somewhere along the way, Meyer is going to have to place the good of the team over some friendships (players and coaches).--Rocky Top Talk

This is all part of Urban Meyer's ingenious plan to ensure that, this year, he won't have to be taken to the emergency room after losing the SEC Championship Game.--And The Valley Shook

The first half of the season has gone about as well as they could have hoped for, and they've only got to find two more wins to become bowl eligible.--Get the Picture

You have to like their odds in Gainesville this weekend, which means that the calls for Addazio's job are going to get really, really loud.--Rocky Top Talk

While LSU may be the conference's most enigmatic, State is probably the biggest unknown right now.--Red Cup Rebellion

Bama fans complained all summer about a schedule that gave so many of their opponents byes before they faced the Tide, but I can think of a worse situation: having to play Nick Saban the week after he's lost to someone.--Hey Jenny Slater

If you look at the difficulty level of their first five games, you'll quickly realize just how much trouble Mississippi is in heading into their final seven.  This is not going to be pretty.--Rocky Top Talk

Slowly climbing their way back to relevance this season. Quietly improving.--And The Valley Shook

Had to roll a functional I-AA team to get that second win, but that's still twice as many as I thought they'd get all season.--Hey Jenny Slater

Happy thoughts:  Vandy is still in control of their own destiny in the East, which is something that Georgia, Tennessee, and Kentucky cannot say.--Rocky Top Talk

Nearly doubling the vegas line is enjoyable. Too bad it was against one of the worst FBS teams.--Anchor Of Gold

Randall Cobb and Derrick Locke are the entire team. The Cats average 36 points a game but allow about 30.--Alligator Army

"Almost wins" do not cut it.  Those count as losses.--And The Valley Shook

So, Barbara Dooley wore a half-orange, half-red ensemble to Saturday's game.  Black would have been more appropriate.--Get the Picture

"Rocky Top" is like a speed bump these days.--Leftover Hot Dog

Probably as good of time as any to have a bye week.--Anchor Of Gold