College Baseball: Yes, the Parks Were to Blame for the Offensive Collapses in the Postseason

Everyone keeps looking at the baseballs and the bats as the reasons that offense collapsed in the SEC tournament and the College World Series this year. But they're looking in the wrong place

Share All sharing options for: College Baseball: Yes, the Parks Were to Blame for the Offensive Collapses in the Postseason

Or, said some with a more narrow view of the problem, bring in the fences.

On the face of it, the idea of bringing in the fences seems a little absurd. Of all the overhauls you could propose, that one somehow smacks the most of changing the settings of baseball almost like you would bump up the power factor in a video game. Where changing the BBCOR bats or the specially-made balls has the elegance of complexity and arguments grounded in physics, bringing in the walls seems -- well, simplistic at best.

Take the SEC, for example. The SEC tournament was where Peterson first got to promote his idea that the problem was the baseball. Where the baseball used in the minor leagues is more tightly wound and doesn't have raised seams, the college ball is less tightly wound and does have raised seams. Both of those features produce more drag on the ball, which makes it go more slowly, which was probably reasonable in the pre-BBCOR bat days, when the proliferation of home runs in the college game created terms like gorillaball.

Peterson was proposing this idea in the middle of a drought of runs that produced games like the 2-1 marathon between Missouri and Mississippi State early in the tournament. So it sounded reasonable. But he was overlooking the simple fact that Hoover Metropolitan Stadium is less offense-friendly than college ballparks around the SEC, and that scoring in the tournament was pretty dramatically depressed not just from pre-BBCOR years, but from the 2013 regular season. 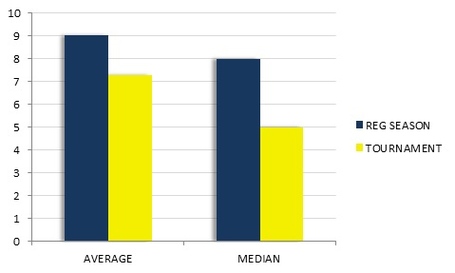 The one thing that did change, of course, is that teams were no longer playing in the often tighter confines of their home park. And so the drop in scoring seems to have less to do with the equipment than with the park.

The same syndrome seemed to play itself out again during the College World Series over the last couple of weeks in Omaha. UCLA got through its side of the bracket by scoring eight runs in three games before facing Mississippi State. The Bruins were perhaps the least offensively powerful championship team in the history of the College World Series, and they won what seemed to be a historically low-scoring series. (None of this, coincidentally, should be taken as an attempt to take away from UCLA's title; they won it fairly under the same rules and conditions that all the other teams faced in Omaha. This is about the future of the event.)

But it's worth remembering the the dawn of the BBCOR bats and the opening of TD Ameritrade Park, where the College World Series is played, happened at roughly the same time. And while TD Ameritrade has the same dimensions as the old Rosenblatt Stadium, there are a few things to remember.

First, the BBCOR bats are lowering offense in the game. So the same dimensions are bound to produce less offense. Second, TD Ameritrade is oriented differently than Rosenblatt, changing the wind currents. And finally, from what I understand, Rosenblatt was on the top of a hill while TD Ameritrade isn't -- something that amplifies the effects of the different wind patterns.

If the main culprit in the lack of offense was the bats and the balls -- and the new bats have taken some of the offense out of the game, no doubt -- then you would expect to see that in the numbers across the board. But, if you look at the difference between earlier rounds of the NCAA tournament and the College World Series, it's clear that something was happening in Omaha. 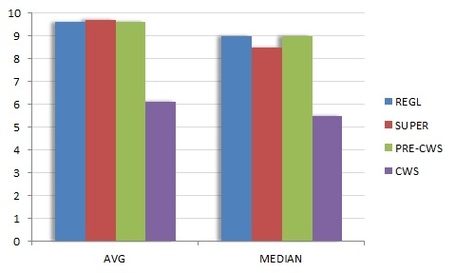 Again, we see a dramatic collapse in offense from the first two rounds of the tournament in the regionals and super regionals to the final round in Omaha. The average rpg falls from 9.63 in the first two rounds to 6.14 once the teams got to Omaha. The drop in median runs was just as steep, from nine runs a game before the College World Series began to 5.5 afterwards. In both cases, that's a drop of about 3.5 runs.

But wait a minute. Maybe all the offense-oriented teams, or a good number of them, got knocked out before Omaha. What if we looked at only those games involving the teams that would end up in the College World Series? Once again, no dice. 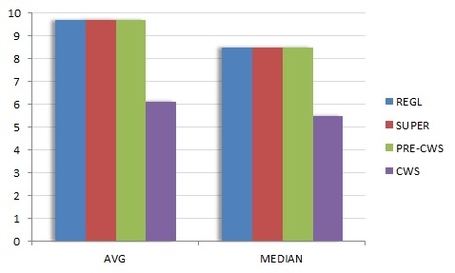 In fact, the fall in the average rpg actually gets worse when you take out the games involving only non-CWS teams, going from 9.7 to 6.14. The media drop does decrease to three runs per game, but that's still a pretty dramatic drop in run-scoring.

One of the explanations offered is that perhaps the pitching was simply better in Omaha, particularly when it comes to UCLA, which had one of the best pitching staffs in the country. (That is, after all, how they won a national championship with a punchless team.)

Coming up with a definitive answer to that would require reams of data and some fairly sophisticated computer work. But there's at least one reason to be skeptical. If we take it as a given that the teams who pitch better were more likely to advance to the tournament, and thus get to Omaha, you would expect a stepped decline in runs. In other words, as the weaker teams and weaker pitchers were eliminated in the regional round, the runs would decrease in the super regional round, then decrease again in the College World Series as only the teams with the best of the best pitchers remained.

Again, with both the SEC and the NCAA tournaments, there was only one thing that changed between earlier games involving largely the same teams and later games with lower scores: the field of play. The same bats and baseballs were being used throughout the 2013 season. But well-hit balls, seeming no-doubters, ending up dying in Omaha when they went out of the park elsewhere.

Changing the stadiums to fix the problem shouldn't be that hard. With the opening of a new version of Regions Field this year to play home for the Birmingham Barons, the only major baseball event now being held at Hoover Metropolitan is the SEC tournament. And the minor-league Omaha Storm Chasers do not play at TD Ameritrade; only Creighton plays baseball there. The Omaha Nighthawks of the UFL used the park as well, but that seems like it won't be an issue going forward. And even if Creighton has a problem with moving the fences in, there's nothing preventing the NCAA from using temporary fences for the tournament.

Now, some fans hate the new bats and want to bring gorilla ball numbers back into the college game. I think that's a mistake, but it's a debate we can have -- as long as the tournament numbers aren't one of the reasons being given for the change.

Because there is a legitimate concern about the lack of offense in the sport's most important showcases, but those are a handful of games played in a handful of locations around the country. We don't need to change every game in the sport to fix this problem, we just need to get more offense into those games that are suffering the most and are the most important for the sport's image. The proper response is to address the actual problems in that smaller group of games -- and those problems are the parks, not the same equipment that's producing so many more runs a game in venues better suited for college baseball.