SEC Baseball Weekend: What Happened to Vanderbilt? And News and Notes from Around the League

Also on tap: A look at the race for the final spot in Hoover and the best bet for a meaningful game this week

Share All sharing options for: SEC Baseball Weekend: What Happened to Vanderbilt? And News and Notes from Around the League

There's perhaps been no turnaround in the SEC this year quite as profound as the one undergone by Vanderbilt. The Commodores went 16-14 in the SEC in the regular season, and that only after becoming one of the hottest teams down the stretch, before going on a tear in the SEC tournament. (They later ran out of steam in the NCAA regionals.)

This season, though, Vanderbilt enters the final two weekends of the season with everything pretty much wrapped up. They've already won the SEC East and will get one of the top seeds in Hoover, though whether it's No. 1 or No. 2 depends on who wins the SEC West and with what record.

So how did Vanderbilt achieve this feat? Largely, through experience. Last year, the Commodores returned six position starters and lost three. But the pitching staff was even more overwhelmed, losing eight pitchers with only six returning; none of the pitchers tabbed as the top returners by the program had logged more than 45.1 innings the season before. Nineteen lettermen returned, but 13 were lost.

This year is completely different. All but one of the members Commodores' usual starting lineup left the team, and 10 pitchers returned, with three moving on. None of the four top returners according to program threw fewer than 53 innings in 2012. As for lettermen, 23 lettermen returned and only seven left.

What effect has that had on the players themselves? Looking at the starting lineup, it's pretty striking. Seven players had at least 50 at-bats in 2012 and 2013, and most of them have increased both of the their on-base percentage and their slugging percentage, and almost all of them have seen a significant increase in at least one of the numbers. 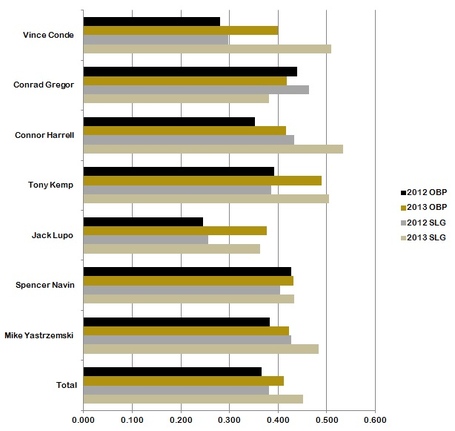 The same is true of the pitching staff's ERA, especially when it comes to Tyler Beede and Kevin Ziomek, who between the two of them have started half of Vanderbilt's games this year. The experience here is crucial -- pitchers in particular tend to grow in college baseball with time.

Of course, that experience comes with a price. Harrell, Lupo and Yastrzemski are all seniors. There are also nine juniors -- including Ziomek and Kemp -- some of whom might take a look at the draft in a few weeks. Even so, Vanderbilt probably won't see the sort of roster clearing that caused much of last year to be a rebuilding job.

Time to start talking Hoover
The SEC tournament is now ridiculously easy to get into. Of the 14 SEC teams, all but two will make it in. Which makes the situation less desperate in a way -- after all, you only have to be one of the 12 best teams in the league -- but also more desperate, because the teams who don't make it are even more worthy of being laughed at.

Right now, the odd teams odd would be Tennessee and Georgia. But we still have two weeks to play, so several teams are at least theoretically in danger of getting locked out.

It's not an inconsequential race when it comes to the tournament. Mid to lower seeds tend to do pretty well in the tournament; No. 5 Vanderbilt and No. 7 Mississippi State played in the championship game last year, and No. 8 LSU beat No. 7 Alabama to win it all in 2010 when the field only had eight teams.

Thursday Night (Friday Morning) Game: Texas A&M 2, LSU 1
LSU lost its first trip to Blue Bell Park for an SEC series in a rain-delayed game Thursday night that trickled into Friday morning after two critical errors in the seventh inning. It was the first time the Bengals have dropped the initial game of a set this year. The tying run in the game scored on a throwing error after a separate miscue put the eventual winning run on base. That saved a strong effort by Daniel Mengden, who watched his team struggle offensively most of the night even as he scattered five hits over eight innings and struck out five.

Series of the Weekend: Mississippi State at Ole Miss
It's not the most compelling weekend of SEC baseball that's ever been played, but the rivalry matchup between the Bulldogs and the Rebels has seeding implications in addition to putting in-state pride at risk. Mississippi State won, 5-1, when the teams played a non-conference game April 9. Sunday's game is on CSS at 2 p.m.