It's become an early season tradition to watch Alabama take on a major opponent at a neutral site in the season's first week. This is the sixth time the team has done it since 2008, and Bama is 5-0 in the previous games with wins over Clemson, Virginia Tech, Michigan, VT again, and West Virginia. The program has more lined up in the next three years, too. 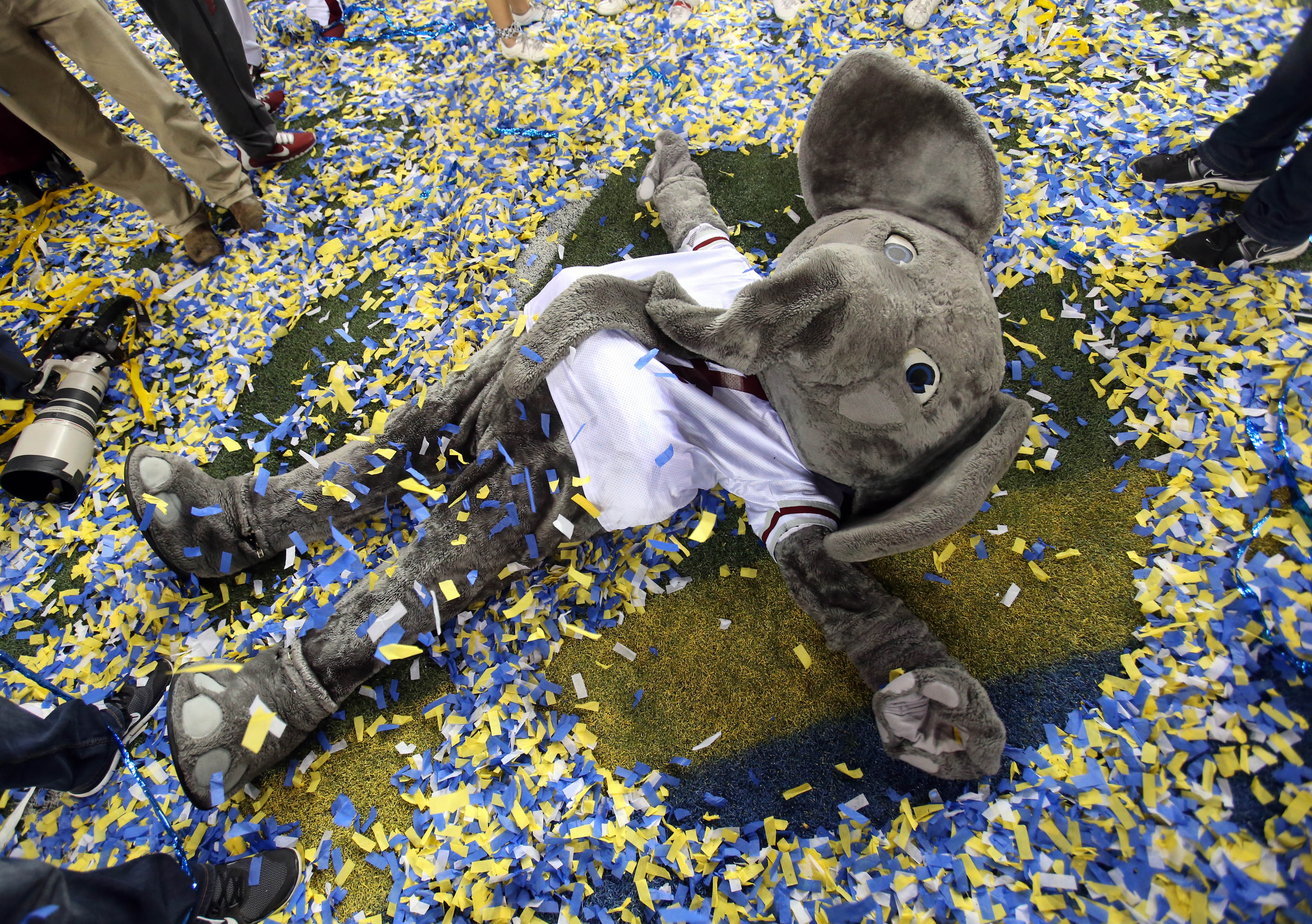 These games have been a way for the Tide to assert itself as one of the best teams in the country, as each victory has come by at least ten points. Few have been scrutinized as much as this one likely will be, with people across the country looking to see if last year's Sugar Bowl loss was the beginning of the end of Nick Saban's era of dominance. The short attention spans of the country are tired of seeing the same team be near the top every year, but Saban's never aimed to please anyone but his own fans.

1A question of quarterbacking. It's been a question all offseason long, so why wouldn't it be today as well? Jacob Coker was supposed to have won the job last year, but he watched Blake Sims nearly win a national title instead. Saban said the race is down to two guys, but he declined to say who was the odd man out between Coker, Alec Morris, and Cooper Bateman. There is no guarantee that the guy who takes the first snap today will do so in any other game this season. Personally, I'm just glad that we're going to get some actual data points in this race.

2The forgotten back. The most common response to the quarterback duel has been, "well, how hard is it to hand off to Derrick Henry?" And really, handing off to Henry seldom a bad idea. Don't forget about Kenyan Drake, though. Bruce Feldman has been saying in writing and on his podcast with Stewart Mandel all offseason that he thinks Drake is the closest thing to a Reggie Bush-like player that Lane Kiffin has had to play with since, well, Bush himself. Not that Drake will win the Heisman, but just that he's versatile in both rushing and receiving. Keep an eye on the guy who's not Henry too. 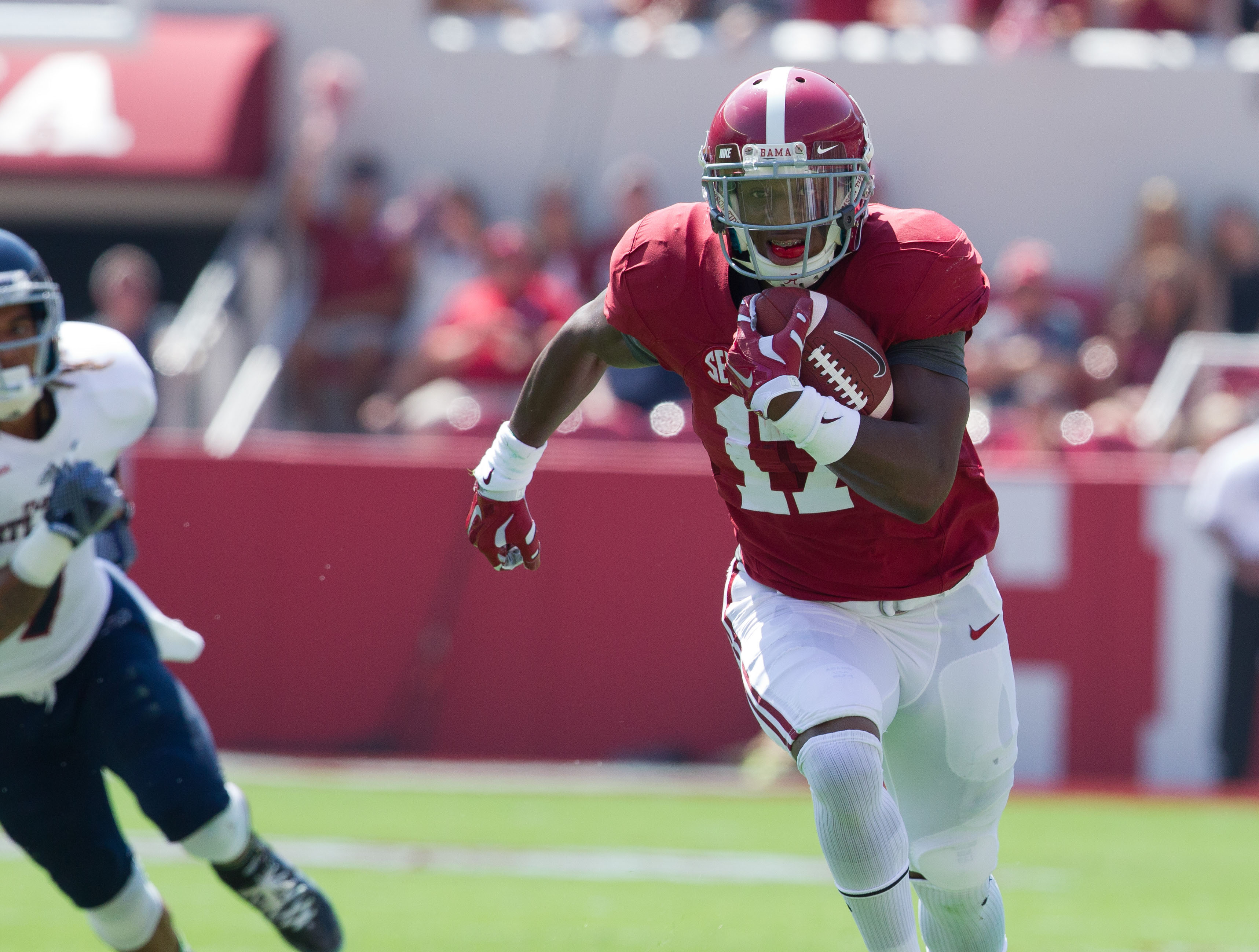 3Who's next at receiver? The Tide had a great combination of wideouts last year with the brilliant Amari Cooper and DeAndrew White. The former had 124 catches for 1,727 yards, while the latter had 40 grabs for 504 yards. The next highest receiver was Christion Jones with 19 for 264, but he's gone now too. This being Alabama, talent abounds. Experience doesn't, though. Who will step up? A good guess might be sophomore ArDarius Stewart, but we'll have to see what Wisconsin gives them.

4Playing out back. The Crimson Tide pass defense did take a dip in 2013, but that was also the best year for quarterbacking in the SEC in a long time. Kirby Smart personally took back over the defensive backfield last year, and though it wasn't on the 2009 or 2011 level, it did improve. Now Mel Tucker, fresh from a decade in the NFL, will oversee the unit. Wisconsin won't challenge those guys like, say, Texas A&M will, but it might take a shot or two. Put it this way: if things are uneventful, then we didn't really learn much. If the Badgers burn the Tide while throwing it, that's a bad, bad sign.

5That old narrative. The conference wars are more than tired out at this point, but Ohio State winning last year's national championship and Michigan State beating Baylor in the Cotton Bowl has caused the Big Ten to get some attention last winter. Ideally the selection committee doesn't get caught up in this stuff, but if Wisconsin pulls the upset, get ready to hear a bunch of SEC vs. B1G talk. I'm cringing already.

A'Shawn Robinson, DT, Alabama: The big man up front has been getting a lot of buzz during the offseason, and he's going to need to be a big time run stuffer today. He'll have a good chance at doing it, since Wisconsin's offensive line is not one of its classic lineups thanks to some youth and inexperience. Robinson is well known in football wonk circles, but if he's going to make his name beyond that, today's a great chance to do so.

Joel Stave, QB, Wisconsin: We don't know who will start behind center for Bama, but we do know it's Stave for the Badgers. He sat out some time last year thanks to, and this is not a joke, a bad case of the yips. Being pressured by this Bama front seven might cause him to get them again, too. But, if UW is going to have a chance, Stave will need to make some big plays in the pass game. Running against that front is a losing proposition.

O.J. Howard, TE, Alabama: The big man showed some real promise in his freshman year, catching 14 balls for 269 yards. He followed it up by catching just 17 balls for nine fewer yards last year. More or less the reason for such little forward progress is because Cooper and White took up all the potential catches last year. With them gone and thanks to the receiver issues mentioned above, Howard has a chance to be a central figure in the pass game this year.

Any coach will tell you that football is primarily about matchups. Alabama's defense is a horrible, horrible matchup for Wisconsin. The Badgers will be using a run-heavy offense behind a line with a few question marks, and Bama counters with the best, strongest, and deepest front seven in college football. With the defense holding things down, the offense will more or less just use this game as a practice. Lots of running from both sides will keep the clock moving and the score down. Bama cruises, but it won't get truly ugly. Alabama 27, Wisconsin 10

SEC Football, Week 1: Schedules, Scores and Results From Around the Conference