It's a big one for the visitors.

Share All sharing options for: Tennessee Volunteers vs. Florida Gators: Start time, TV coverage, How to Watch Online, and More

The Tennessee Volunteers are 0-for-the last two Florida Gators football coaches. Urban Meyer went 6-0 against the decaying Phillip Fulmer regime, Lane Kiffin's one year, and Derek Dooley's first. That was more palatable to take given Meyer's position as one of the best coaches of the current century than the 0-4 record against Will Muschamp. Perhaps the hardest to take was last year when Florida looked dead in the water until a true freshman quarterback came off the bench and turned a 9-0 Tennessee fourth quarter lead into a 10-9 Gator win. 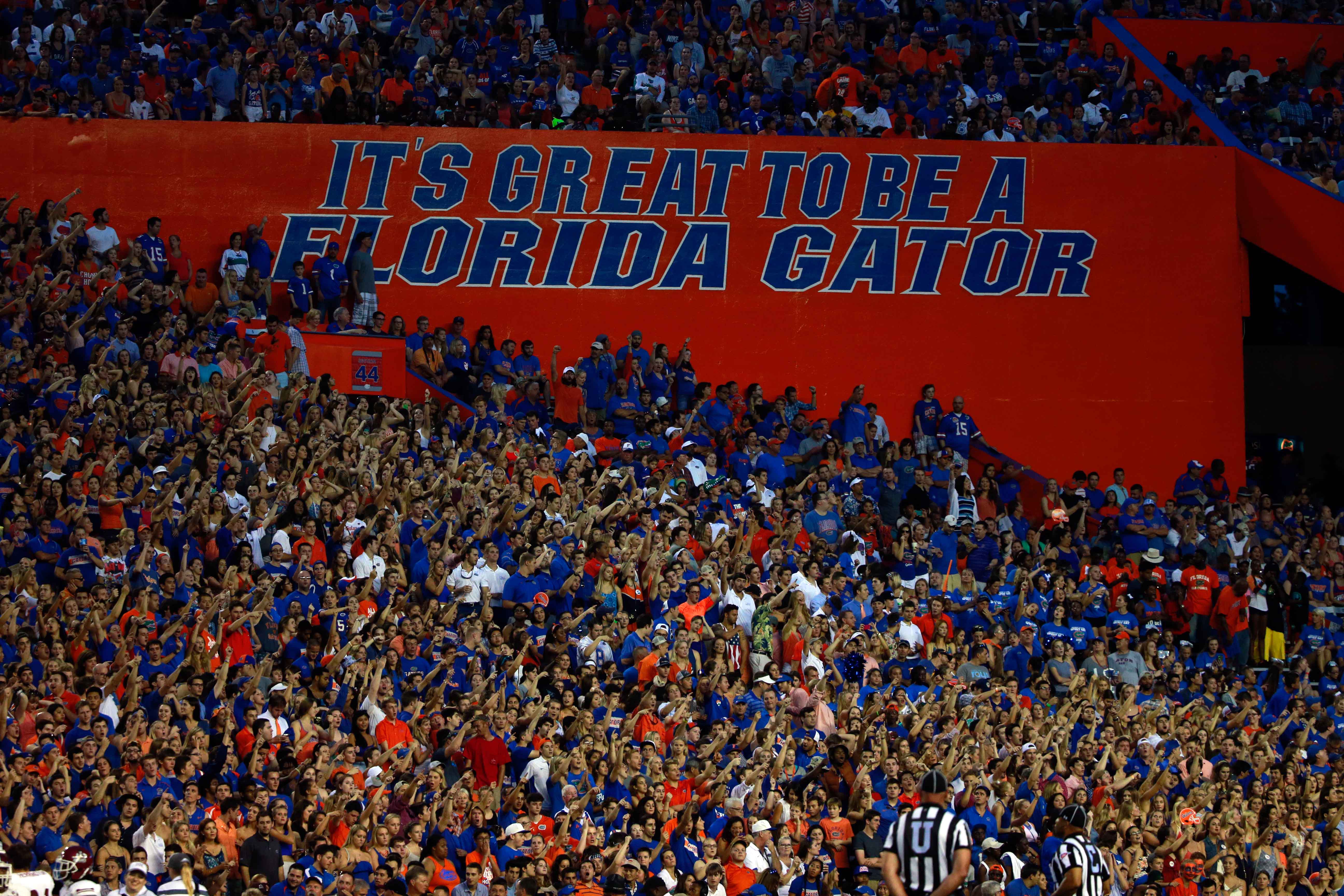 Toss that game in with, among other things, the Week 2 second half collapse Tennessee had against Oklahoma, and Butch Jones has a lot to prove when it comes to finishing big games. He's been selling potential for over two years now, and in this his third on the job, he needs some kind of payoff to give to Volunteer fans. Beating this rebuilding Florida team wouldn't be a huge deal for a generic division contender, but for Tennessee, it would be a big symbolic boost.

On the other side, Jim McElwain covered the base of continuing the win streak over Kentucky that Galen Hall started in the mid '80s. Keeping the shorter streak over Tennessee going is less essential, particularly when Jones has a few years' head start in the rebuilding process. Even so, picking up a win here will instill some confidence and momentum in a way that a five-point win over Kentucky doesn't. It's not looking likely that the Gators will get a win over its other two rivals of Georgia and Florida State, so beating Tennessee will at least get one of those big three games in the win column to make fans who are still getting to know him more on his side.

1Finishing strong. The game isn't just a test to see if Jones can win a meaningful game against a good team. You can argue that he's already done that in each of his first two years with 2013's win over 11-win South Carolina and last year's bowl blowout over Iowa. Even giving him a mulligan for his first season on the job, Jones has let several games slip away late. He went into the fourth quarter of this year's Oklahoma game with a 17-3 lead. He went into the last frame of last year's Florida game with a 9-0 lead. He was down just three to Mizzou and four to Georgia in the fourth quarter of eventual losses a year ago as well. About the only great fourth quarter Jones has had since 2014's start was last year's near-miracle comeback against South Carolina and its pitiful defense. Finishing strong against this Florida team with its strong defense will make a statement beyond just ending the streak.

2Explosions in the sky. The Tennessee offense has done a fairly good job of generating explosive runs of ten yards or more, gaining that much on 15.1% of their rush attempts so far. Despite two of the three teams they've faced being Bowling Green and Western Carolina, they've only generated explosive pass plays of 20+ yards on 7.9% of drop backs. Against Oklahoma's defense, the explosive pass play rate tumbled to just 2.9% of drop backs. With Florida's run defense looking fine and a starting Gator cornerback out, Tennessee must get some explosive plays going in the pass to keep Geoff Collins from selling out on the run entirely.

3A work in progress. The Florida offensive line is still trying to find its way. It got a boost last week with five-star freshman Martez Ivey entering the mix for the first time after arthroscopic surgery on his knee in the preseason, but it still gave up a pair of sacks and paved the way for just 3.6 yards per carry against Kentucky. No offense to the Wildcats, but Tennessee has the best D-line the Gators have faced so far. If the guys up front struggle in this game, then Florida will have a real tough time moving the ball.

4The dynamic duo. It turns out that Joshua Dobbs might need a little more seasoning than we thought, but it wasn't supposed to matter a lot. Tennessee has a great pair of running backs in Jalen Hurd and Alvin Kamara, and if anything happens to the passing game, UT was supposed to be able to lean on them. Hurd kept up his end of the bargain against OU, going for 109 yards on 24 carries (4.5 YPC). Kamara disappeared in the game, rushing for four yards on four carries and catching one pass for five yards. A sometimes iffy offensive line can explain a bit of that, but Tennessee will need both backs on top of their games in this one.

5Avoiding the injury cart. Florida didn't have a deep team to begin with, but it's getting dire in spots. Linebacker is particularly thin, and it'll be without Jeremi Powell and almost certainly Alex Anzalone. Announced suspensions for Treon Harris and Jalen Tabor leaves Will Grier the only decent option at quarterback and no trustworthy backups in the secondary with Quincy Wilson stepping in for Tabor. If Grier goes down, or anyone else in the secondary falls, or any other linebackers get hurt, or anyone on the thin and inexperienced offensive line can't go, Florida will be in a really bad situation.

Derek Barnett, DE, Tennessee: Perhaps no single player has the ability to affect the game for the Vols than Barnett. Whether he lines up opposite FCS grad transfer Mason Halter, the true freshman Ivey, or a sophomore in his first year of playing in David Sharpe, he'll be the best defensive end that any Florida offensive tackle has faced in a game so far. This year's Gator offense is particularly vulnerable when havoc breaks out in the backfield, and few create backfield havoc as well as Barnett does.

Will Grier, QB, Florida: This is Grier's first game where he's not going to have to look over his shoulder to see if Harris is warming up on the sideline. He's been uneven on the season so far, particularly when it comes to pressure. Against New Mexico State and ECU, he didn't do enough to avoid rushers when they got past blockers. Against Kentucky, he took off too soon and missed open receivers in a couple of instances. When he's on, he's been great. When he's not, he's making frustrating freshman errors. Which Will Grier we see the most of will go a long way to deciding the game's outcome.

Marquez North, WR, Tennessee: North looked like a future star two years ago as a freshman, but injuries plagued him in 2014 and 2015 began with a knee ailment in fall camp. After getting just one catch in the Vols' first two games, he snagged three a week ago against WCU. Tennessee had better hope that means he's getting into the rhythm of the offense, because we know he can add a big dimension to the passing attack that was missing in the loss to the Sooners. If he's going to have a breakout game, he could scarcely pick a better time than Saturday in Gainesville.

So much of this game will depend on things we won't know until after the opening kickoff. Will Florida lose any more key contributors? Which Joshua Dobbs will show up? Will either offensive line be able to block the opposing defensive line? Will guys like Kamara and North be able to step up or will they have no real impact like they did against OU? What exactly is the "GatorTail" package, will we even see it, and will it be effective at anything?

I don't have high expectations for offense in this one as I think both lines will struggle and both quarterbacks will be inconsistent. I don't think it'll be a "first team to ten points wins" contest as last year's was, but it wouldn't shock me if it ends up that way.

Florida will get off to a slow start on both sides of the ball as it has done in every game so far, but it'll recover and grind things down to a relative stalemate. McElwain will find a way to move the ball with clever usage of his tight ends, while overly conservative play calling from Mike DeBord late will hamper the Vols down the stretch. A little home field magic saves the Gators, but only just. Florida 24, Tennessee 20