It's time to focus on guys from outside the conference.

Share All sharing options for: NCAA Football 2015: How Consistent Are the Nation's Best Returning Quarterback Starters?

Yesterday, I looked at how consistent (or not) the SEC's returning quarterback starters are. I wanted to see how many of them ran up their numbers against bad defenses while struggling against good ones.

In that piece, I found that Dak Prescott was very consistent no matter the difficulty of the defense. I consider that a good sign, because it means that you're not going to see a drop off in his passing when going up against the best defenses the conference has to offer. The other quarterbacks were far better against bad defenses than good ones, and in their specific cases, I thought that was also good because they're from the bottom half of the league. Playing better against bad defenses showed that they could at least play better than their season stats would suggest sometimes.

Today's set of players are going to be held against the Prescott standard because these are supposed to be the best returning starters the rest of the country has to offer. Being unbalanced and lighting up bad defenses while showing poorly against good ones, while understandable, would expose them as possibly not being the quarterbacks we thought they were.

As with yesterday, the tiers are based on the 2014 S&P+ passing defense rankings: 1-25 in those rankings, 26-50, and 51+. FCS opponents went in the 51+ tier. If a quarterback didn't play at least two games against a team from a particular tier, it won't show up below. The tables show the player's stats against the best defenses and then the difference between those numbers and the weaker tiers of defenses. Also in the percentage columns of the tables below, the changes noted are percentage points, not percentages.

One last thing: here are the averages of the key stats that the top tier of defenses collectively allowed against Power 5 competition.

He didn't quite start the whole year, but he still played significant amounts of 12 games. I call that enough to include him here, especially because he's probably going to win the starting role.

Barrett was a freshman last year, so a big gap between good and bad defenses should be expected. The three games against top defenses were Virginia Tech, Penn State, and Michigan State. Struggling against VT in his first start is understandable, and he did light up MSU after an iffy game against PSU. If he's as good as people seem to think, we should see this gap close this year—or at least have the good defense stats rise and then see truly ridiculous numbers against bad ones. 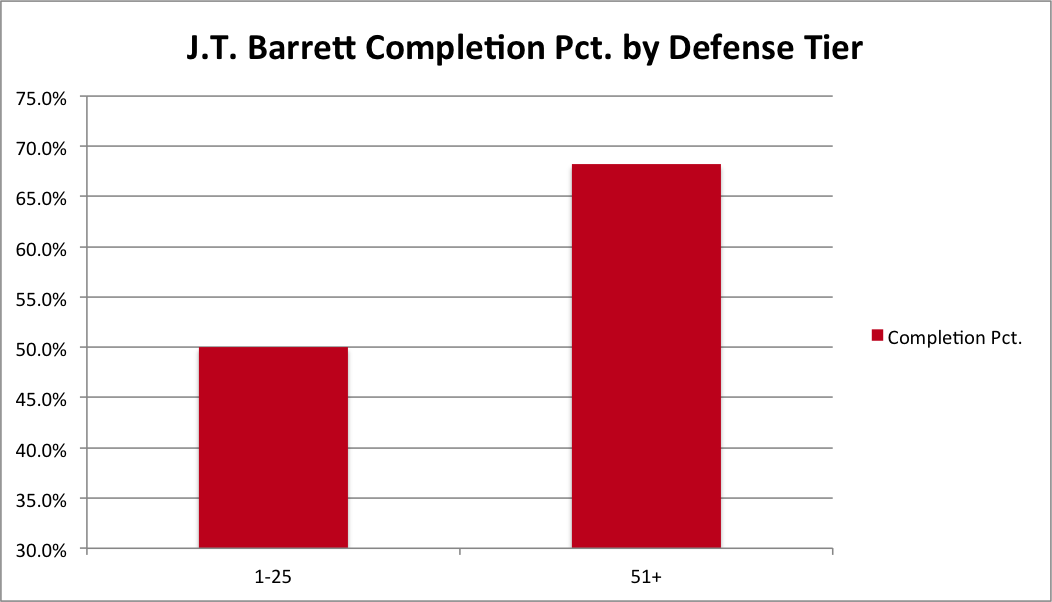 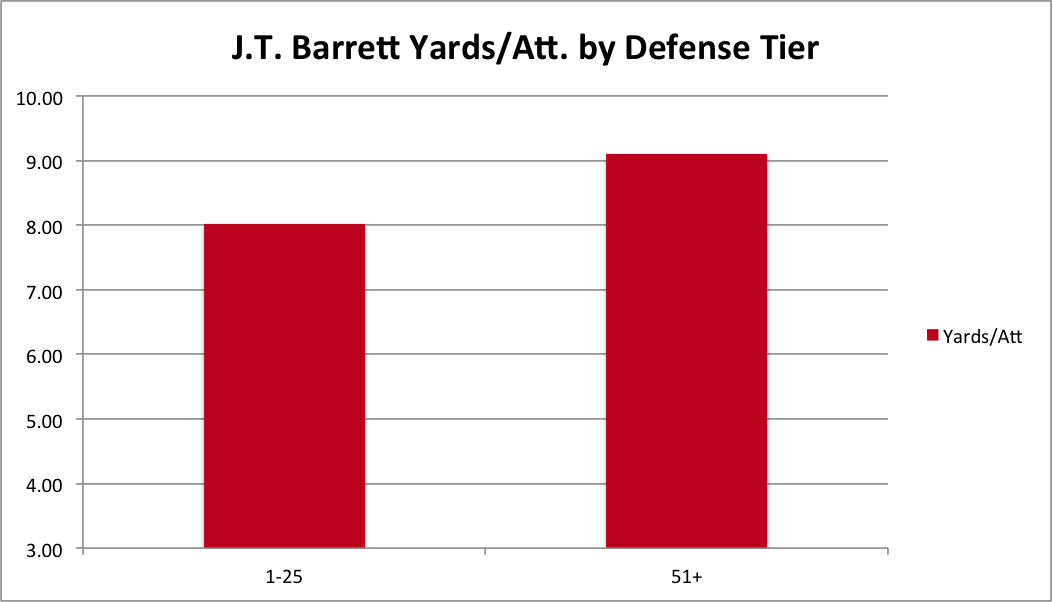 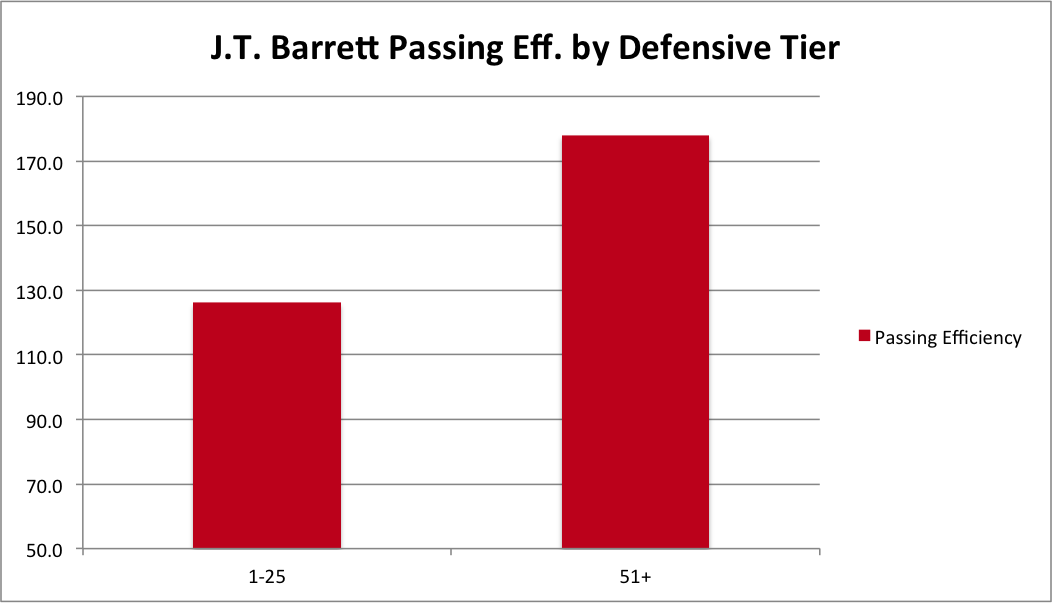 Boykin had a breakout year last year and heads into this one as one of the Heisman front runners.

He did better than average in two categories but not truly great against the top defenses, which were Texas and Ole Miss. Even as those were blowouts, he completed under 60% against the Longhorns, threw three picks against the Rebels, and had under seven yards per completion against both. These figures suggest a conservative plan against top defenses and a more aggressive game plan against the rest, where he didn't do so hot against middle tier defenses but torched bad ones. These figures don't account for his running ability, of course, but that's beyond the scope of what I'm looking at. 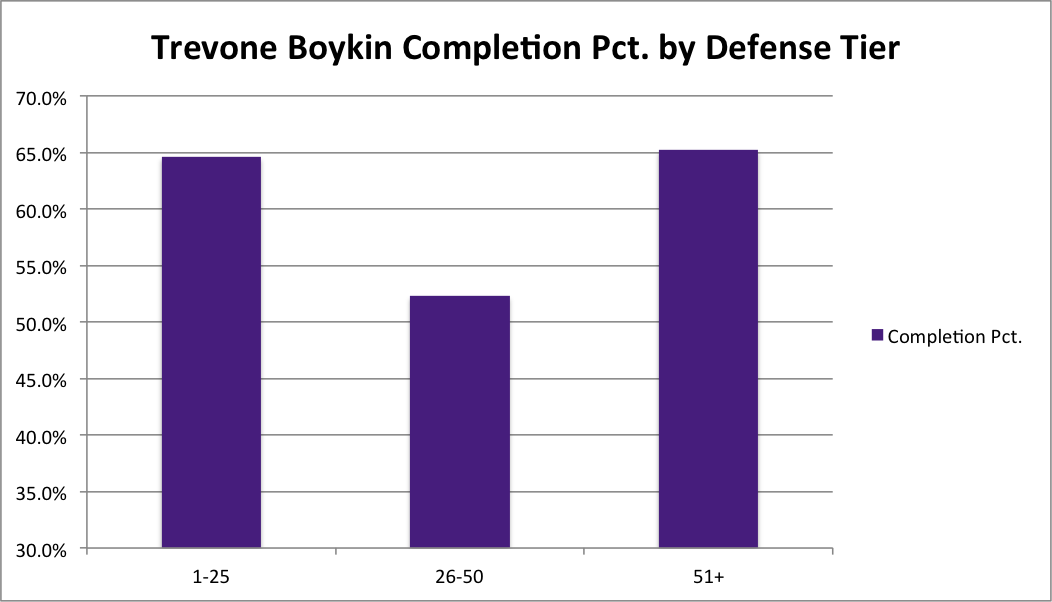 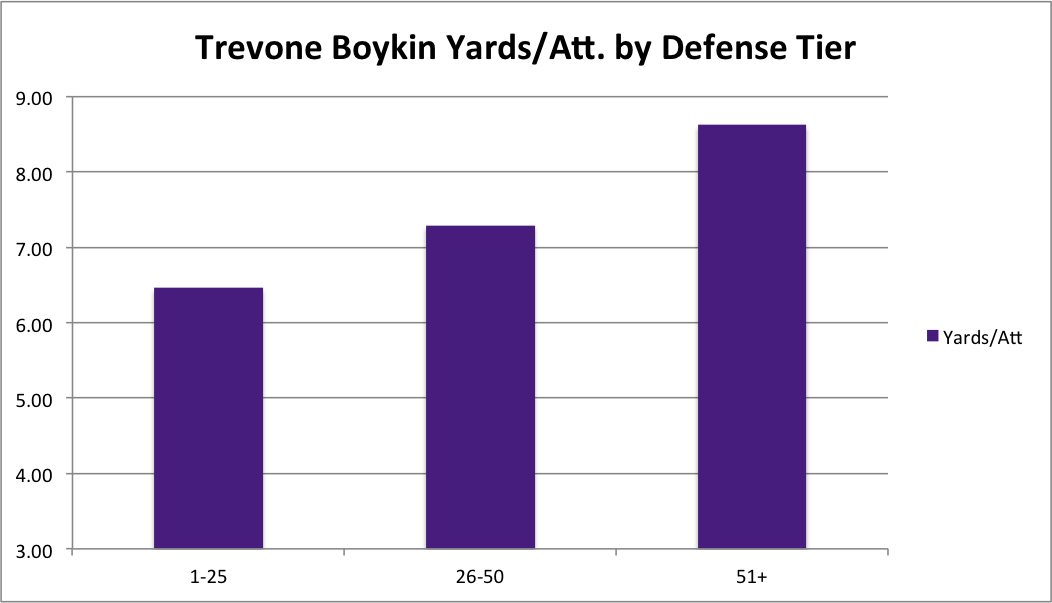 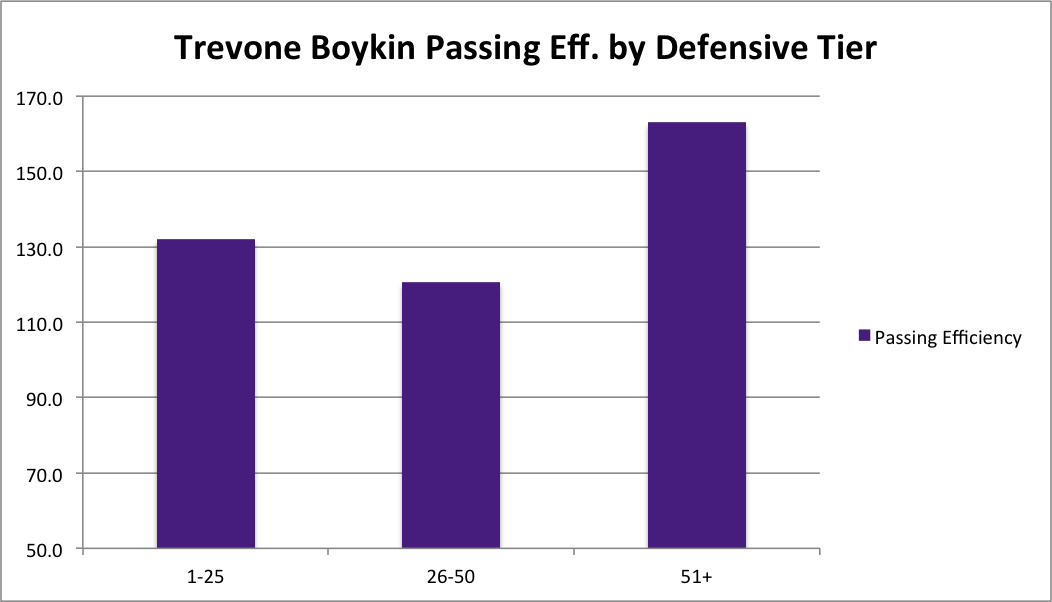 The USC signal caller is the first one who is pretty straightforward in demolishing bad defenses and coming way back down to earth against the good ones.

That's not to say he was bad against good defenses; his performances against Utah and Nebraska from that top tier stand out, and he's well above average in all three. That said, in the six games against bottom tier defenses, he posted two passing efficiencies in the 170s, one in the 190s, and three in the 200s. He's a good quarterback, but his season numbers might be a bit deceiving thanks to nearly half of them being him just destroying bad defenses. 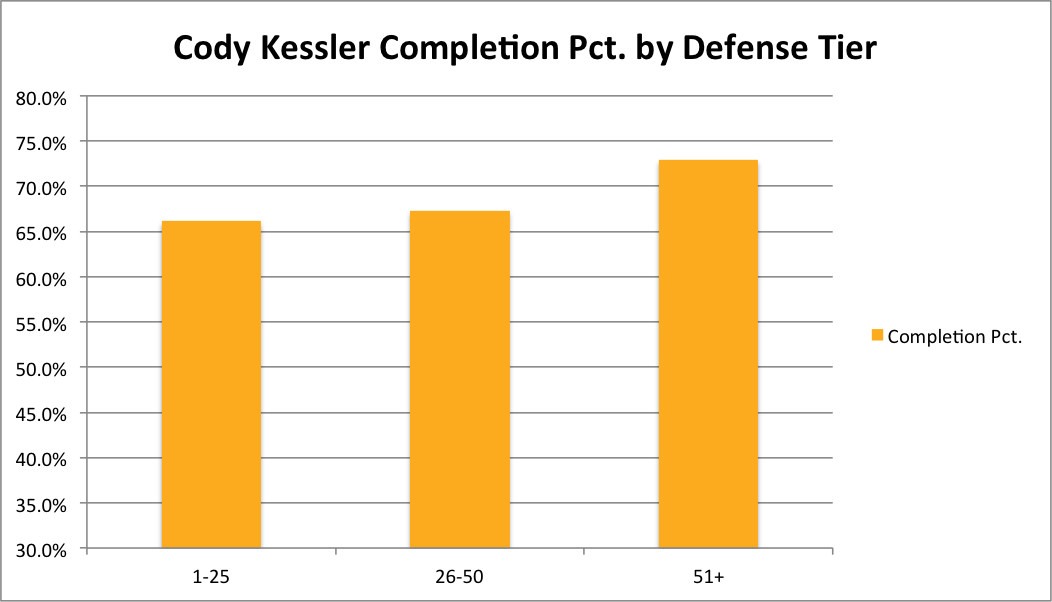 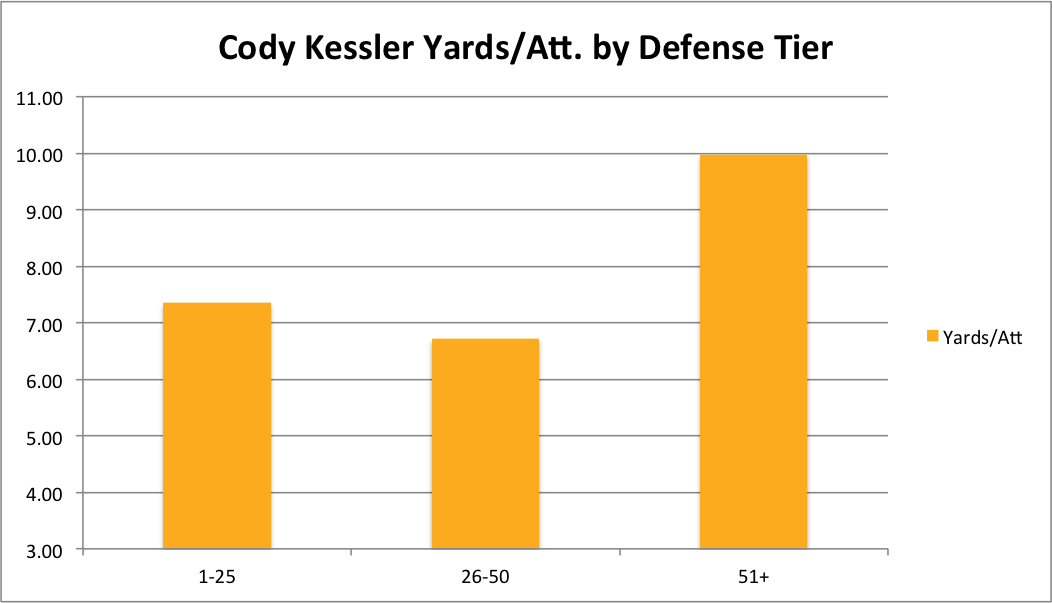 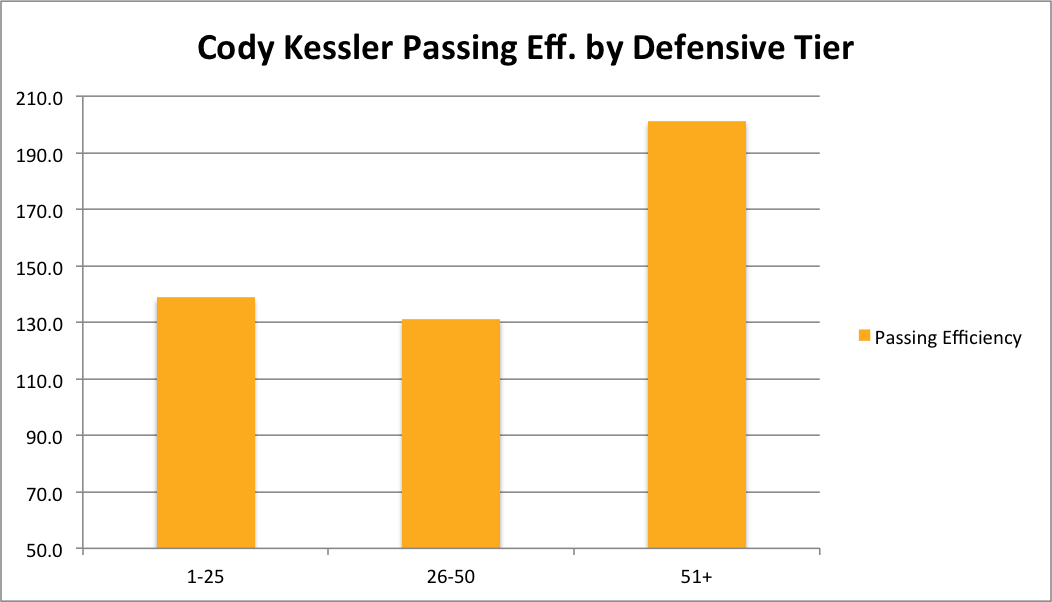 He's one of the top NFL prospects, according to those who think they know.

The performance against the top defenses is very close to Barrett's, although no one would ever tie them together much thanks to their differing styles of play. He's not much better against the middle tier, but he smokes the bad defenses. 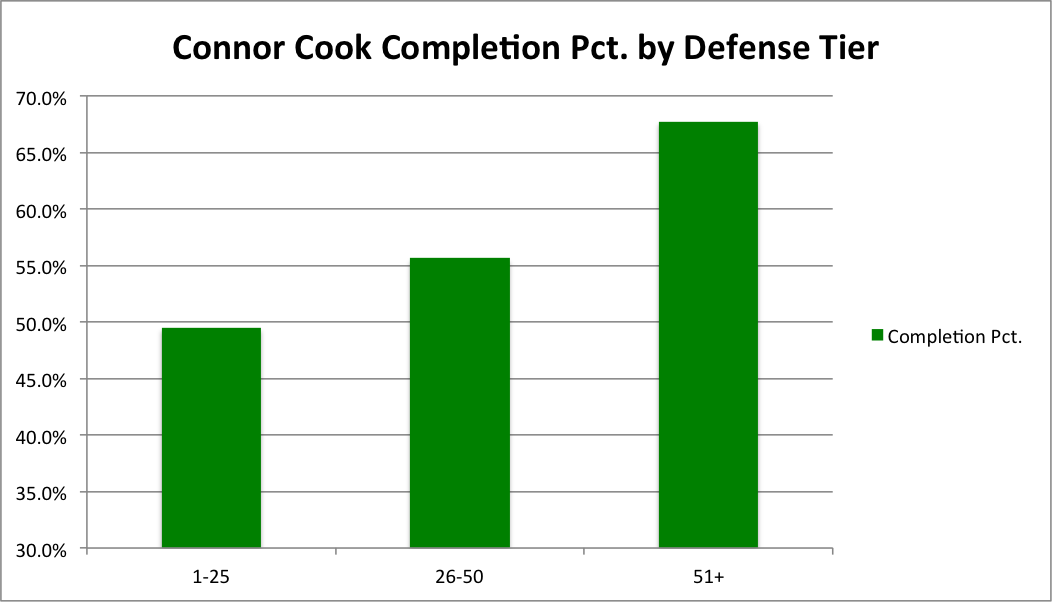 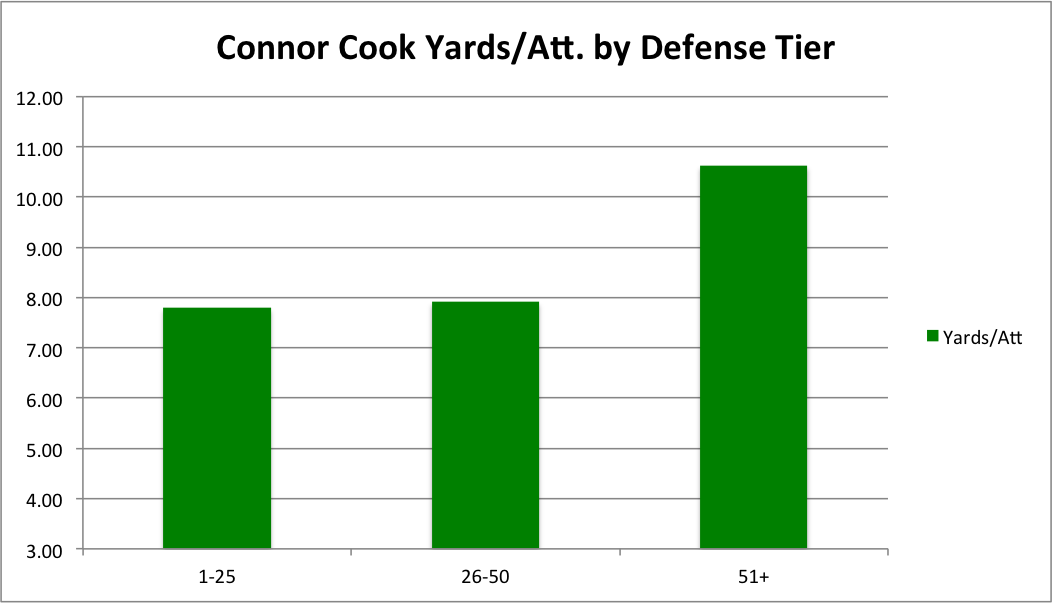 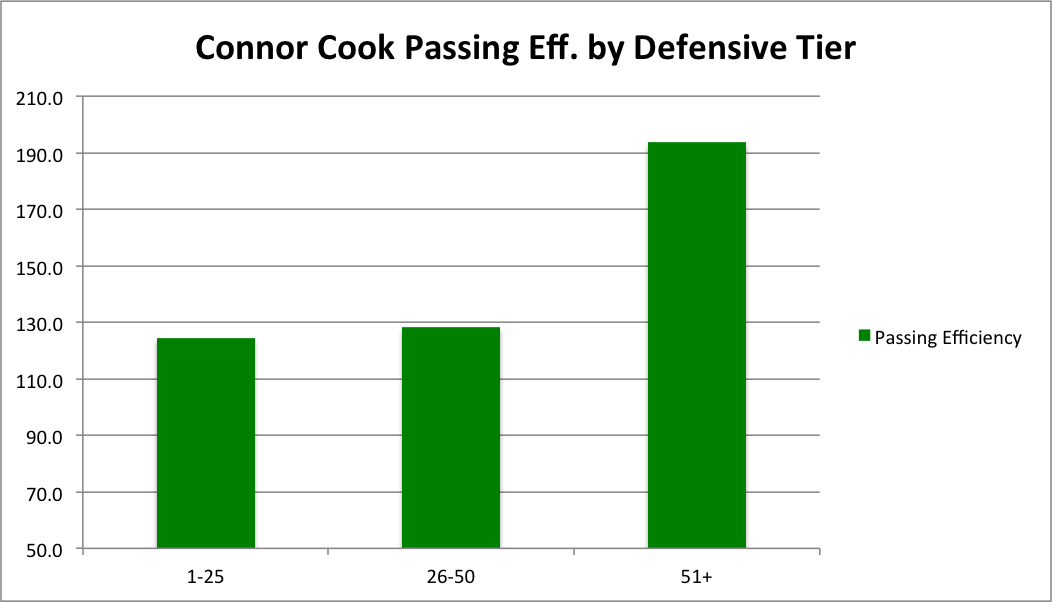 Goff's big thing is interceptions. He had three in the two games against the top defenses and four total in the other ten. Like fellow Air Raid guy Boykin, his yards per attempt against the best defenses is low despite having a higher completion percentage than guys like Barrett and Cook. Also notable is that his numbers against the top tier are nearly identical with the averages. 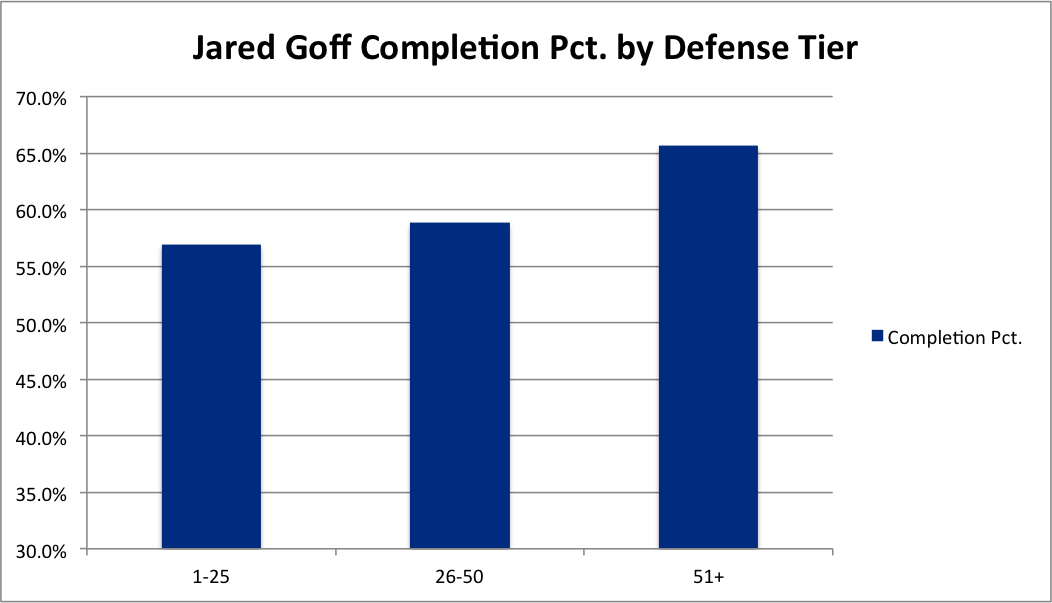 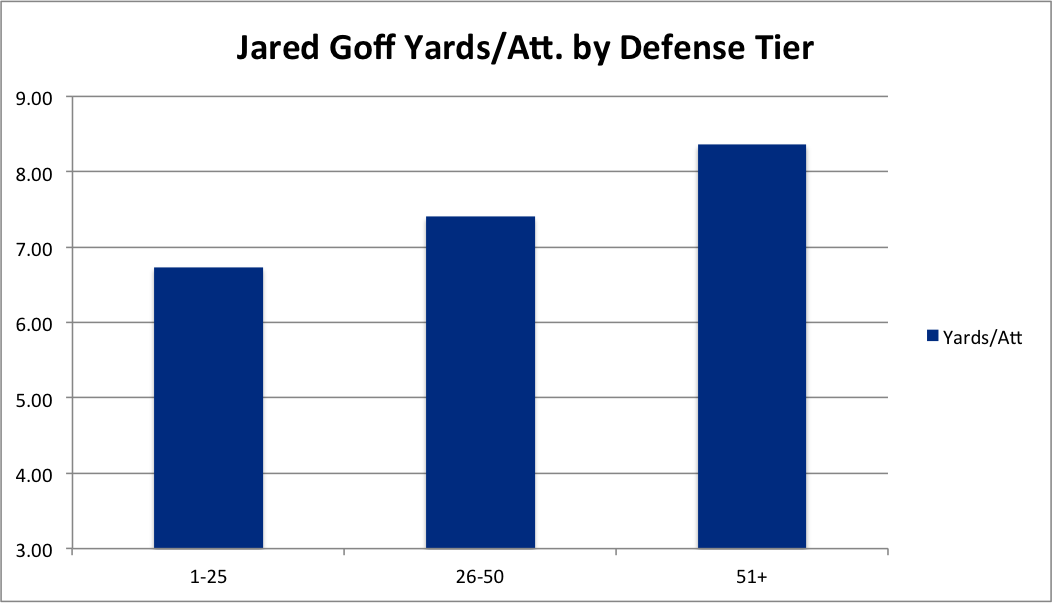 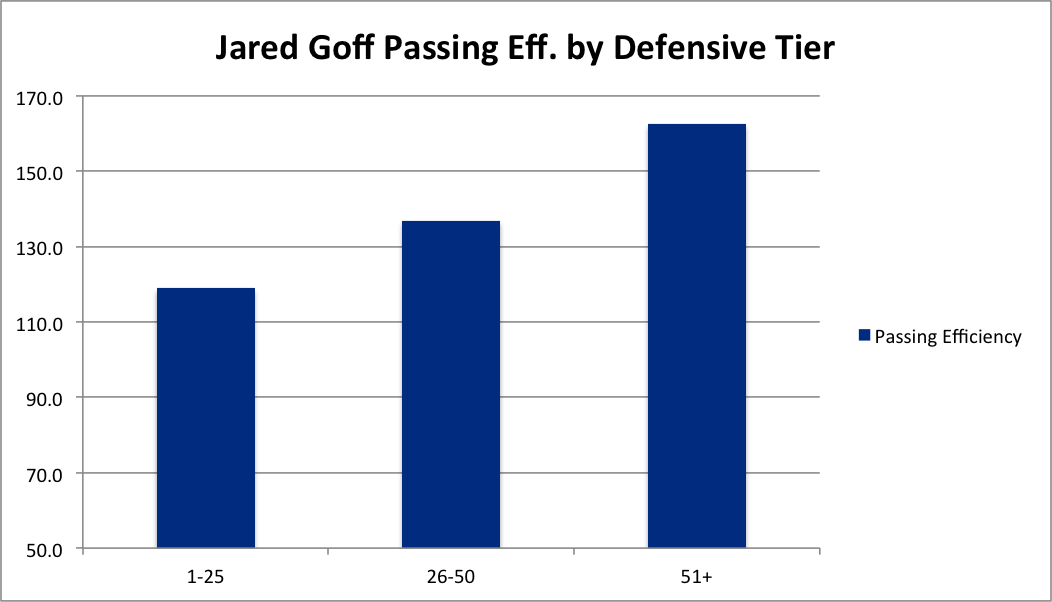 The only true freshman on this list that I've made.

His performance against the top tier actually is better than that of redshirt freshman Barrett in completion percentage (10 percentage points higher) and passing efficiency (4.2 higher). His peak wasn't as high against the bad defenses, although A) he was a true, rather than redshirt, freshman, and B) his supporting cast on offense wasn't nearly as good. 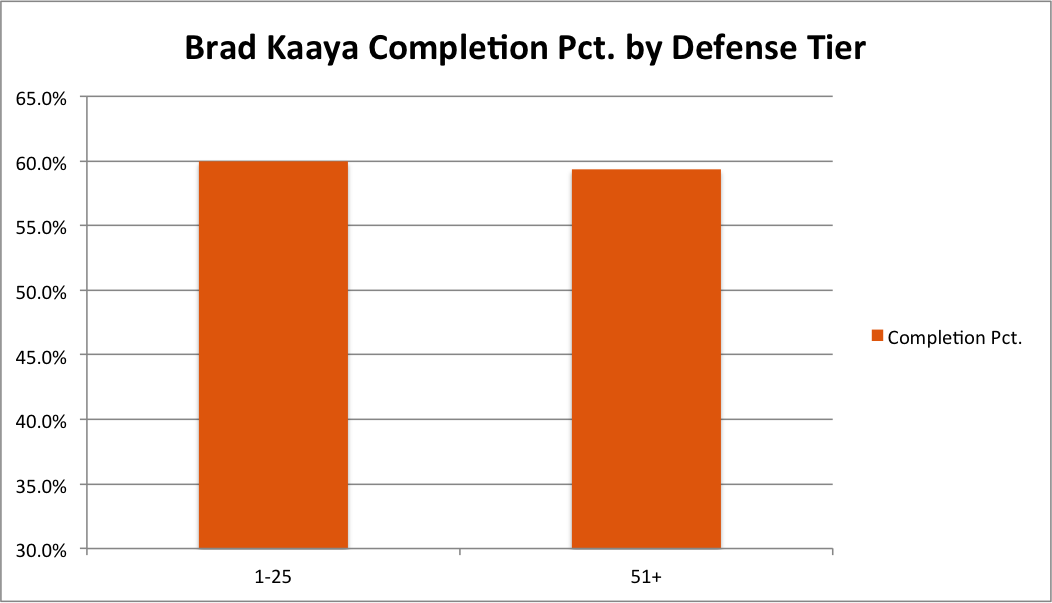 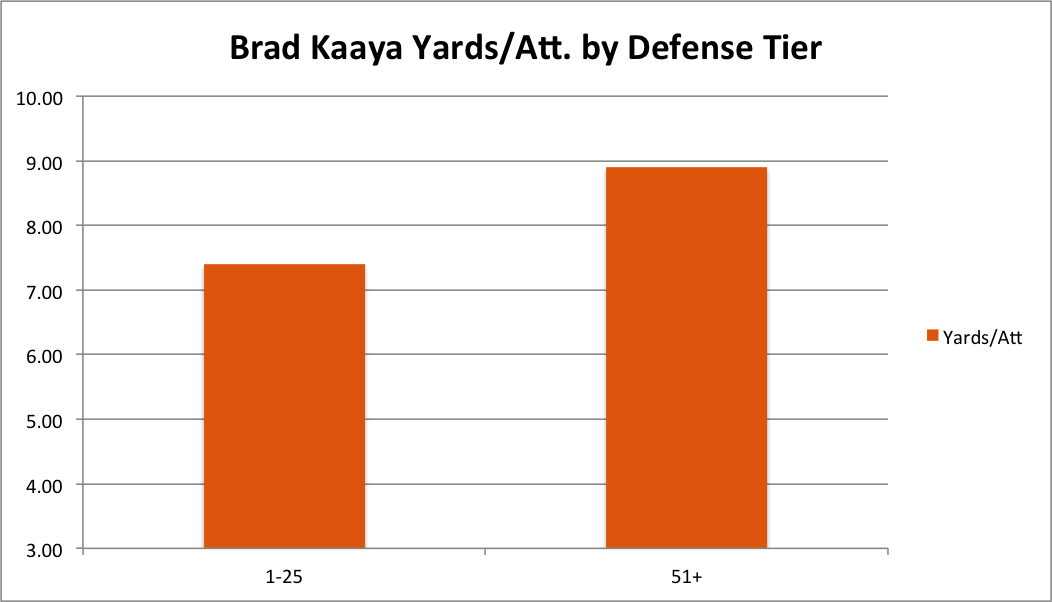 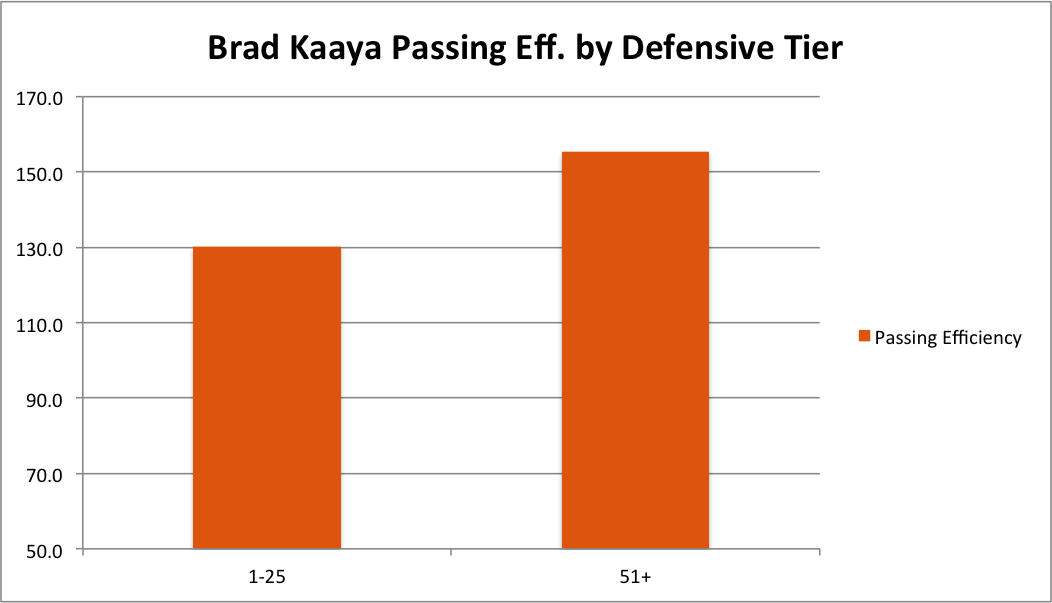 You can actually find a little bit of dark horse Heisman chatter about the Florida transfer.

If he's going to live up to any of that chatter, he's going to have to get a lot better against good defenses, or at least dominate the bad ones by a much greater degree. 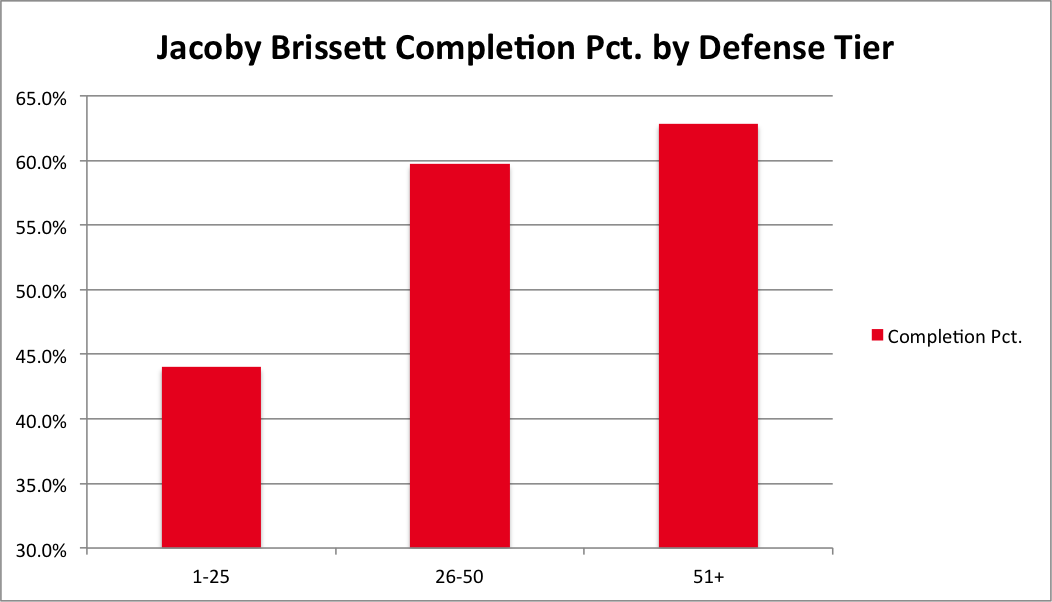 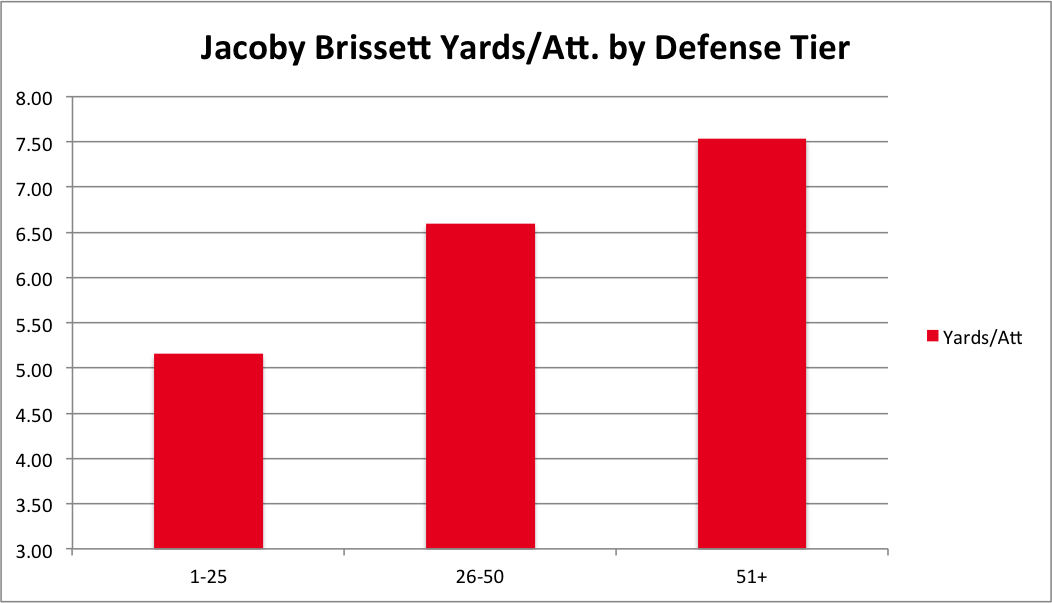 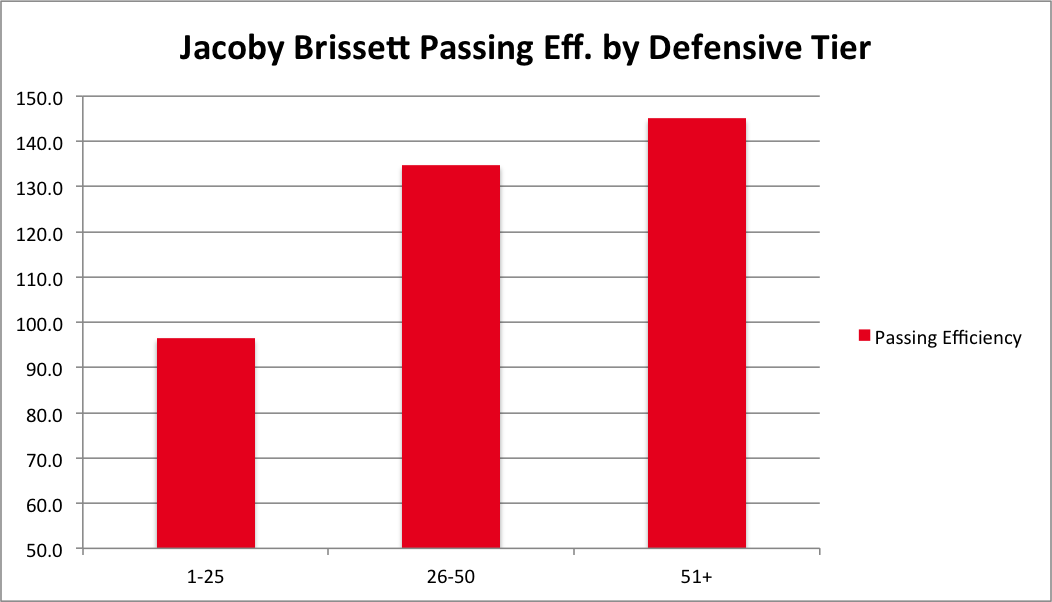 Here are how these players stack up in the difference between their play against the top tier and the bottom tier of defenses, adding in Prescott from yesterday. It's sorted by passing efficiency.

Dak still comes out as the most consistent, though that could just mean that Dan Mullen doesn't call for as many deep freebies against bad defenses as other coaches do. Boykin aside, the most celebrated guys on the list are the ones with the largest gaps between their top tier and bottom tier passing efficiencies. Take that for what you will.

Here is how they do just against the top tier.