Revenge will be on the mind of Alabama as they host Ole Miss Saturday night. After shocking Alabama last year during the first weekend of October, Ole Miss, of course, struggled later in the season after injuries and a lack of depth set in while the loss proved to not be detrimental to the Tide's playoff aspirations. For 2015 (admittedly with small sample sizes thus far), the two teams look to be the class of the SEC West with LSU and Texas A&M looking to close the gap. The winner of this game will enter the season's second month as the probable favorite in the division (presuming an Ole Miss win over Vanderbilt) and have as much momentum as any team in the country.

1 and 2: The Offensive Lines. With the possible exception of the Alabama quarterback position, the offensive lines probably make up the biggest question marks of each team. The teams should be led by future high round draft picks at left tackle in Cam Robinson and Laremy Tunsil, but with Tunsil presumably out it leaves the Rebel line in a state of flux. For the opening two games of the season, Fahn Cooper shifted from right tackle to left and redshirt freshman Sean Rawlings slotted in at right tackle. Against inferior opposition, getting significant playing time from Rawlings allowed Ole Miss to avoid the pitfalls of last year's LSU and Auburn games (of which Tunsil missed significant time due to injury) as last year's backup tackle at both sides, Robert Conyers, is now starting at center and offers an upgrade of last year's starter Ben Still. If Rawlings struggles or is overwhelmed by the occasion, look for Conyers to shift back to tackle and for Still to enter at the center position.

For Alabama, the right side of the offensive line also comes in with question marks as Dominick Jackson struggled with Middle Tennessee's defensive line. Jackson has been a decent run blocker, but seems to struggle with speed rush ends. Against Marquis Haynes, a 220 pounder who garnered 7.5 sacks as a freshman in 2014, Jackson will face a formidable foe. The left side of the Alabama line offers strength with Cam Robinson and Ross Pierschbacher paving the way for running backs Derrick Henry and Kenyan Drake

3The Alabama Rushing Game. On top of the natural revenge factor for the team, both Derrick Henry and Kenyan Drake will be looking to this game for different reasons. The Ole Miss game in 2014 was a struggle for the Henry as only picked up 37 yards on 17 carries (2.18 ypc) for the worst per carry average of his Alabama career (when having more than one carry in a game). The 2014 game was also the game in which Kenyan Drake suffered his season ending leg injury. So far in 2015, Henry and Drake have combined for 7.7 ypc, but will be matching up against one of the best defensive fronts they will face all year with Robert Nkemdiche, Fadol Brown, and co.

4Coker or Bateman. Jake Coker drew some criticism for his play in the season opener against Wisconsin for holding onto the ball too long at times and has been switched out in both games for Cooper Bateman. Does Coker look solid and go the distance, does a platoon come into play, or does Bateman garner significant playing time as he looks to take the job for up to the next three seasons? In a(n again) limited sample size, Bateman's game appears to be more of a dink and dunk passer as his yards per attempt is over three yards less than Coker's (9.1-6.0) while Bateman boasts an eight percentage point higher completion percentage. Last season, it was the third game of the year where Blake Sims and Lane Kiffin busted the game open early against a highly ranked early season opponent in Texas A&M. Can Coker or Bateman do the same this year? 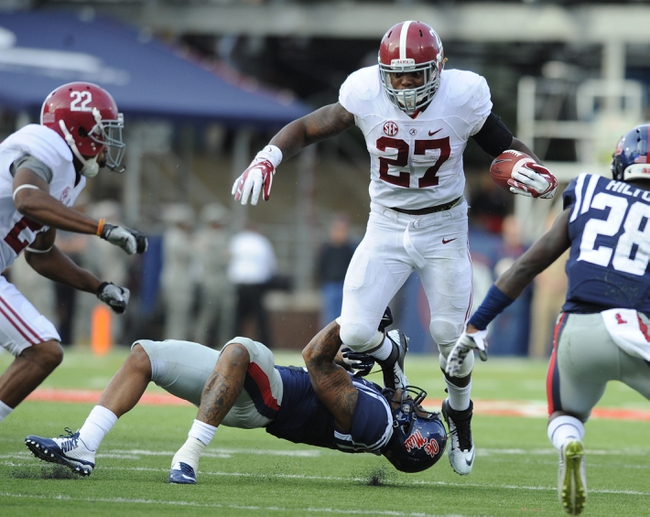 5Stars on the Ole Miss offense. Coming into the season, it was Laquon Treadwell and Evan Engram that garnered the headlines. Through two games, however, the two preseason All-SEC players have been quiet. While Treadwell leads the team in receptions (9), he is third on the team in yards and has yet to catch a touchdown. Engram, after being one of Bo Wallace's favorite targets, only has two catches in 2015. The slack has been picked up as Cody Core and Quincy Adeboyjo have accounted for six touchdowns, but against a better defense will new quarterback Chad Kelly find the pair of reliable juniors that have been kept quiet in 2015? 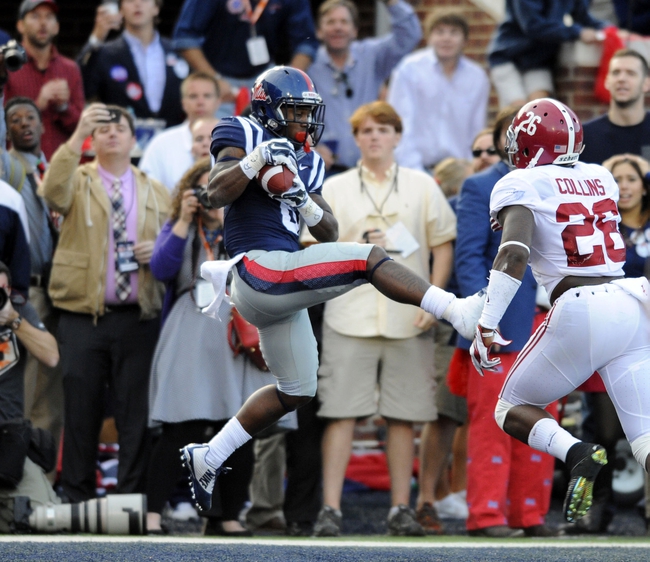 Alabama is 9-1 in revenge games under Nick Saban and that does not look to change. History is not on the Rebels' side with the revenge factor as well as the fact that they've only won once in Tuscaloosa, the famous/infamous (depending on which side you're on) brick game in 1988. Last year, Ole Miss was the better team for the second half after trailing at halftime. That role reverses this year as the Rebels take a halftime lead, but Alabama pours on the running game in the second half. Alabama 21, Ole Miss 17