Wooooooooooo ... this one'll be close.

So uh, Arkansas plays on Saturday. It plays Texas Tech, at home. Last time Arkansas played a game, it didn't go so well. Resultantly, some folks are calling this game a must-win for the Hogs; which, normally two games into a season would be considered crazy. Especially when the team is yet to play a conference game, but it doesn't seem so in this instance. 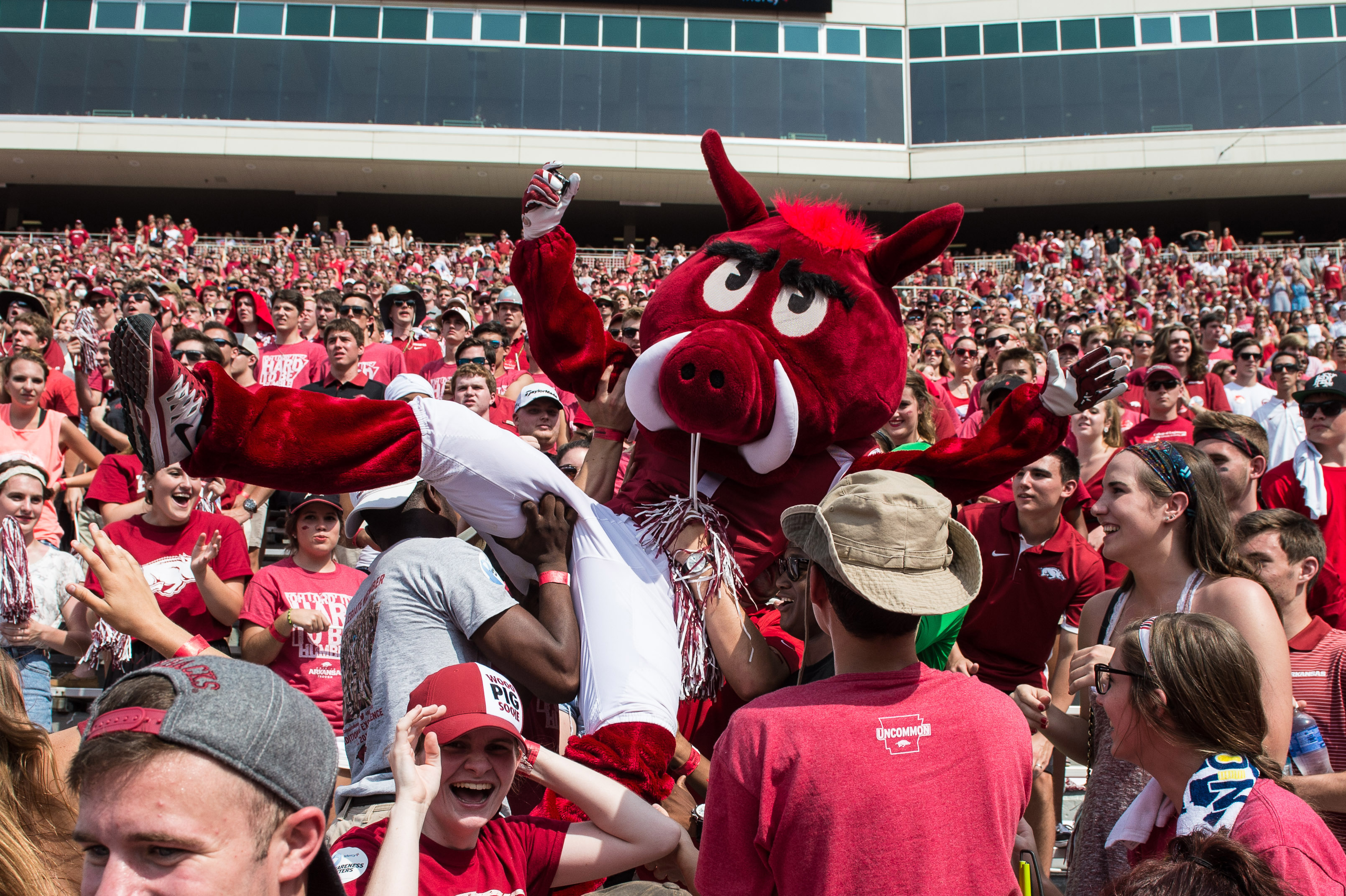 Now sure, perhaps the loss was a fluke, and maybe Arkansas's true colors have yet to be shown (I mean, they outgained Toledo by almost 200 yards!). But in order to prove such, and to keep fans hopeful this season, Arkansas pretty much needs to beat Texas Tech. It did so last year, and convincingly (49-28). Arkansas this year is a double-digit favorite to win despite both teams sharing a common opponent, UTEP, who Texas Tech beat a little more badly (69-20) than did Arky (48-13). On paper, Arkansas is probably better than Texas Tech, but who knows where the Razorbacks are mentally right now. Don't count on any blowouts this time around.

1The Arky psyche. For most Power 5 schools, exceptions being those like Kansas, losing to Toledo would do a number to their self-esteem. The Hogs, and their coach more specifically, have been the laughingstock of the country this week. There's an old adage about not letting one loss turn into two, and Arkansas would do quite well to forget about Toledo and focus entirely on Texas Tech. It's an obvious suggestion, sure, but easier said than done—especially for the always mentally-fragile group of 18-22 year-olds. You'll be able to tell rather early on Saturday where the Hogs' heads are at.

2The red zone. Arkansas had five trips to the red zone last week and came away with 3 points, total. That's it! Three points! Such is not ideal if you'd like to win a football game. The Razorbacks tried a bunch of stuff inside the 20—field goals, runs, passes—but none of it quite worked out. The blocking (performed by the biggest O-line you'll ever see) was shaky. The passes from quarterback Brandon Allen were off-target. It was a disaster. Arky's gotta score points in the red zone this week.

3The Red Raider defense, specifically the rushing defense. Here's a fun fact: Texas Tech's current D-Coordinator, David Gibbs, is the team's sixth such coach in the same number of years! That's pretty wild! Anyhoo, the Red Raiders defense was abysmal in its first game under Gibbs: it gave up 45 points to Sam Houston State, who you've never seen play. The D showed a little better last week, giving up only 20, so it appears that it may be improving. As you may recall from my earlier words, Texas Tech was beaten down by Arkansas last year. It gave up 49 points, and 499 yards, and 438 of those came on the ground! Arky completed 6—six!—passes for 61 yards. Tech now lines up in a 4-3 (it ran a 3-4 last year), and the emphasis this week will deeeeefinitely be on stopping the run. That's a task made a bit easier this season than last with Arky RB Jonathan Williams (who rushed for 145 yards on ‘em in '14) out for the year.

4How's Arky's Pass Defense? Despite losing last week, the Razorbacks still haven't given up much in the way of points this season. However, the Hogs did let Phillip Ely throw for 237 yards and a touchdown last week; and Toledo's offense isn't as pass-friendly as Texas Tech's. Patrick Mahomes is the Red Raiders quarterback, and he's done aight so far, throwing for 786 yards and 8 touchdowns in two games. Arky's pass defense was somewhat tested last week (and didn't do terribly great, it seems); how the Razorbacks' back end holds up on Saturday will be kind of important.

5The hogs. Arky's offensive line, from left to right, goes like this: (6-5, 340), (6-5, 334), (6-3, 322), (6-5, 312), (6'10 [!], 331). Lawd hammercy. With beef like that, theoretically, every running hole should be as wide as the men creating them. Last Saturday was not the best outing for this group of elephantine behemoths, and though starting running back Alex Collins wasn't wholly healthy, 103 total rushing yards from this team is laughable. Because it shouldn't mater who totes the rock; it could be Bret, hell, Jen Bielema, and she should still be able to run for a buck-fifty, no problem. Arky's line is key to its success this week and every week. It probably won't be as bad this week as it was last.

Patrick Mahomes, QB, Texas Tech: I'm not the biggest fan of giving quarterbacks extra spotlight, but Mahomes is key to Tech's fortunes on Saturday, obviously. He was named Big 12 Player of the Week after the Sam Houston State game, during which he threw for 425 yards and four touchdowns. He's only a sophomore, but as a freshman he set or tied Big 12 frosh records for passing yards in a game (598) and touchdown passes in a game (six). He is a possible star in the making, and you should watch him.

Brandon Allen, QB, Arkansas: Allen is an integral part of Arkansas' game plan. Overlooked by last week's loss was Allen's performance: he threw for 412 yards! He did not however, throw any touchdowns; he was also off target during times where it would've been nice for him to be more accurate (i.e. in the red zone). It's unknown if Tech can force Allen and Arky to beat it through the air, but it will most certainly try. Let's watch together how Allen responds. 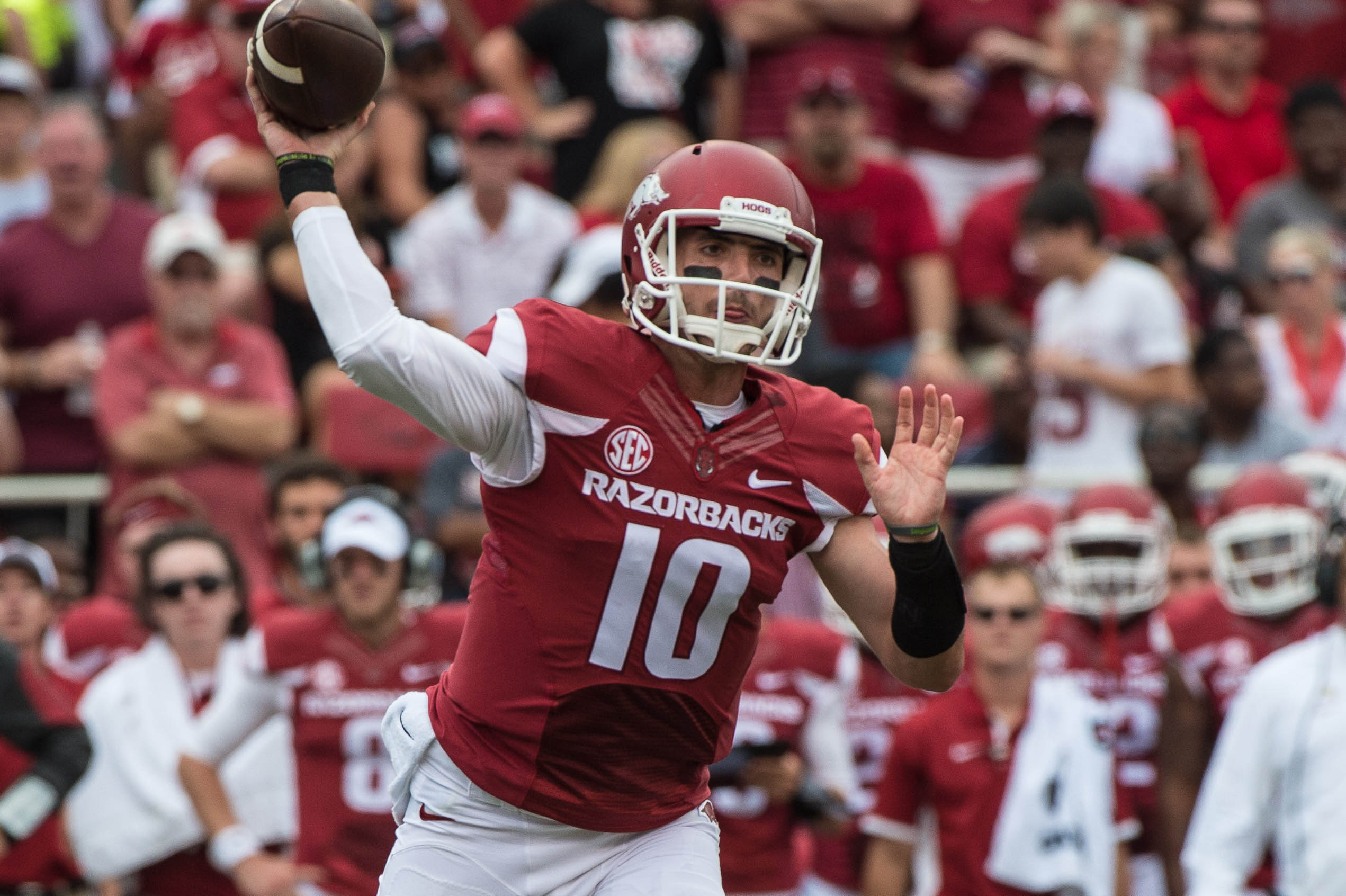 Alex Collins, RB, Arkansas: Collins ran for 212 yards in this game a year ago, so he was somewhat impactful. He'll likely need a similar output this year, especially considering again, that Jonathan Williams' 145 yards or so won't be around to help out. Much of what Collins does hinges on the large men in front of him sure, but assuming they hold up their end of the bargain, Collins—less than healthy or not—needs a better day than the 54 yards on 20 carries of last week.

It's been fun to poke, well, fun, at Arkansas and Bielema. But much like its red-faced brethren in Auburn, the Razorbacks team that showed last week was not its best self. Mahomes and Tech present a formidable challenge, and odds are they get off to a fast start and an early lead on Saturday. But with a presumably motivated O-line and Collins, Arkansas should be able to control the clock on a Tech defense that's still getting it together. Arky I think pulls through in a close game, and, for the sake of its psyche, it needs to. Arkansas 28, Texas Tech 27