Are 28-game losing streaks made to be broken?

Share All sharing options for: Florida Gators vs. Kentucky Wildcats: Start time, TV coverage, How to Watch Online, and More

The Florida Gators travel to Commonwealth Stadium Saturday evening to take on the Kentucky Wildcats. It's one of the historically rare occasions when UK has upheld its end of the bargain and entered this perennial early season match-up undefeated. Arguably, UK's 2-0 record is more impressive than Florida's identical 2-0 mark. 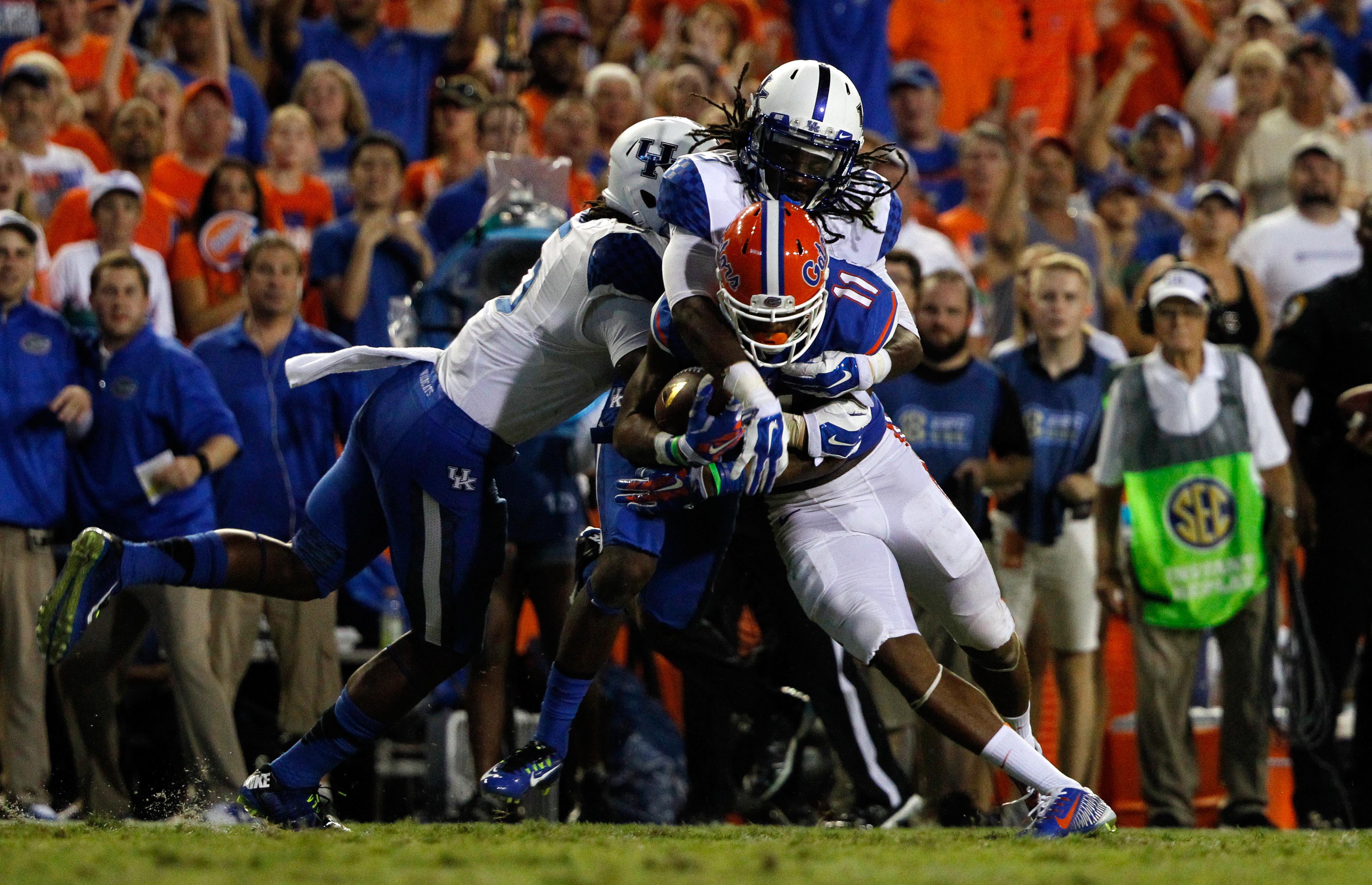 This game will go a long way towards determining the pecking order of the SEC's "mushy middle." I think it's safe to say neither of these teams are a threat to win the SEC East this year, but a win is important for both programs. For Florida it's an opportunity to extend their annual dominance of the 'Cats and demonstrate they can win a road game against an opponent that's improved. For Kentucky, it's a chance to exorcise some ghosts and further cement progress.

1The Streak. Florida owns the longest winning streak in the country, and it just so happens to be against Kentucky. The last time the 'Cats defeated the Gators was in November 1986. This was the same month the Iran-Contra affair news broke, Mike Tyson won his first title, Boston's "Amanda" was the number one song in the country, and people were under the impression that Tom Cruise was a sane individual. Mark Stoops was a teenager. There's been some close calls during The Streak—Ron Zook nearly lost in 2003, and last year's game was an overtime thriller—but most years the outcome has been decisively in Florida's favor. UK has begun to build something under Mark Stoops, and a night game at home (for something called a "Blue Out") against a flawed Florida unit may be the best opportunity UK will have in the years ahead.

2Kentucky Is Improving. Believe it or not, but Kentucky football is slowly evolving from comically inept to straight plucky. Mark Stoops made the strategic decision to plunder the state of Ohio for Ohio State's recruiting leftovers, and it won several recruiting battles against the likes of Notre Dame, Michigan State, and Nebraska in the process. Meanwhile, the UK Athletic Department worked around tricky state bonding issues to spend $45 million in new facilities alone. That's not to mention outbidding major programs to keep important assistant coaches. This is a stark departure from the somewhat successful Rich Brooks years, when Papa Brooks never shied away from bemoaning the lack of administrative support. The results even led Jim McElwain to comment how Florida's administration should take note of UK's efforts this week. Florida learning something about football from Kentucky? Is this real life?

3Florida's Tight Ends. Kentucky displayed a weakness defending South Carolina's tight end last week. Jerell Adams caught three passes for 52 yards and a touchdown against the Wildcats last Saturday. He also drew two pass interference penalties from UK's secondary. A diving pass break-up by stud linebacker Josh Forrest barely prevented him getting a second touchdown on the night. Florida's coaches have undoubtedly watched that game and are poised to replicate the Gamecocks success. Critically, this is also a strength of the Gators. Tight end DeAndre Goolsby leads Florida in receiving, his back-up C'yontai Lewis is fourth (although his status for the game is unknown at time of posting due to a hand injury), and senior Jake McGee may be the best of the bunch. Featuring the tight end is what Florida wants to do. UK's defensive coordinator on Wednesday highlighted the threat posed by Florida's tight ends. UK will probably look to defend Florida's tight ends with a combination of nickel back, safety, and linebacker depending on where they align, but each potential defender has inherit drawbacks.

4The Trenches. The Florida offensive line versus Kentucky's front seven will be entertaining in the same way it's entertaining to watch the undercard of a boxing pay-per-view. If you lower your expectations, you will almost certainly enjoy yourself far more. Neither unit has done much of note so far this season, and it's unlikely either will distinguish itself over the course of the season. UK is currently allowing 220 yards rushing per game, and Florida is allowing 1.5 sacks per game despite not facing strong competition and having mobile quarterbacks. That's not mentioning the fact Florida hasn't exactly set the world on fire running the ball either. If UK can prevent Florida from running the ball, then the onus could fall on a young redshirt freshman quarterback to perform.

5The Advanced Stats. At this stage in the season, the advanced stats are still incorporating preseason data, but they do have some interesting nuggets for this match-up. BCF Toys projects a 26-19 Florida victory, and so far this season the model has a track record of 72-18 (though it did incorrectly pick South Carolina to beat Kentucky). S&P+ currently ranks UK 67th overall with an offense ranked 33rd and a defense ranked 94th. Florida is ranked 38th with an offense ranked 38th and a defense ranked 52nd. UK's defense—which gave up a ton of yards, but was very good in the red zone against South Carolina—appears to be the factor that would keep UK from ending the losing streak, going by the numbers. Then again, UK's defense is currently tied for first in the SEC in creating turnovers with 5, while Florida has coughed up the ball 3 times against lesser competition. If, and it's definitely an "if", UK creates turnovers, that would go a long way towards erasing Florida's offensive successes.

THREE (OR FOUR) TO WATCH

Will Grier and Treon Harris, QBs, Florida: As mentioned above, Grier will be playing in his first road game on Saturday. Thus far, he boasts a 74% completion percentage in the comfy confines of The Swamp, but it's an open question how he'll respond in front of sold-out, blue-clad crowd. Harris has also played well so far this season, but he didn't exactly distinguish himself last season. If they can provide a diversified attack and limit turnovers, Florida will very likely hang some points on Kentucky.

Stanley Boom Williams, RB, Kentucky: Williams is currently fourth in the SEC in rushing, and has an insane 10 yards per carry average. He's also a threat receiving out of the backfield, and has four receptions so far this season. Florida's defense is only allowing 25 rushing yards per game, but Williams will be one of the best running backs Florida faces this season. If Williams has a big day, and helps keeps UK's defense off the field, UK's odds of winning increase substantially.

Demarcus Robinson, WR, Florida: Robinson flat-out wrecked UK's secondary last season going for 15 receptions and 216 yards. For perspective, he finished 2014 with only 53 receptions and 810 yards in total. UK's secondary appears to have improved from last season, but Robinson at times will inevitably be matched-up against true freshman cornerback Chris Westry. That's a match-up Florida likely welcomes, even if Westry has earned SEC honors this week. If UK sells out on stopping the run, and continues its tactic of heavy blitzing from defensive backs on passing downs, Robinson will see a lot of single coverage.

Full disclosure: I tipped my hand in May predicting this would probably be the year UK finally breaks free from the yoke of Gator repression. Nothing I've read or seen to date has caused serious reconsideration. UK is better this year—and seemingly improved between the first and second games—while Florida currently appears to be an average team that will peak later in the season to UK's benefit.

At this stage in 2015, the two teams are roughly equivalent to each other. Whenever that's the case, it's reasonable to assume the home team has a slight edge. UK will find success running the ball against Florida's depleted linebacker corps, Austin MacGinnis will kick some field goals, and Florida's offensive line will limit the Gators' offensive production in what will likely be a theme against SEC competition this season. UK 23, Florida 17