SEC Football 2015: How Consistent Are the Returning Quarterbacks?

Which feast on the bad defenses but wilt against the good ones?

Share All sharing options for: SEC Football 2015: How Consistent Are the Returning Quarterbacks?

Something none of us do very often is dig into season stats to find out who pads their stats against bad teams while faltering against the good ones. So, I decided to look at the SEC's returning full-season starting quarterbacks to see how they did against different kinds of defenses.

I broke it down by tiers of defense inside the S&P+ passing defense numbers from 2014: 1-25 in the rankings, 26-50, and 50+. I realize this necessarily limits the analysis because it doesn't include rushing, but I think passing is enough for today.

If a player didn't face more than one team in a tier, which only ever came into play with the 26-50 range, I eliminated it from the charts below. I also included all FCS opponents in the 51+ tier. Also in the percentage columns of the tables below, the changes noted are percentage points, not percentages.

The preseason first team All-SEC quarterback was remarkably consistent. This table will show you his numbers against the top tier, followed by the differences from the lower tiers from the top tier.

The Bulldog signal caller actually fared better agains the top tier than the bottom in completion percentage, and his middle tier performance was his best. I'll spoil it now: he has the least overall difference between the tiers of the returning guys. He's consistent, and he doesn't get his numbers purely from bombing bad teams and struggling against the good ones. 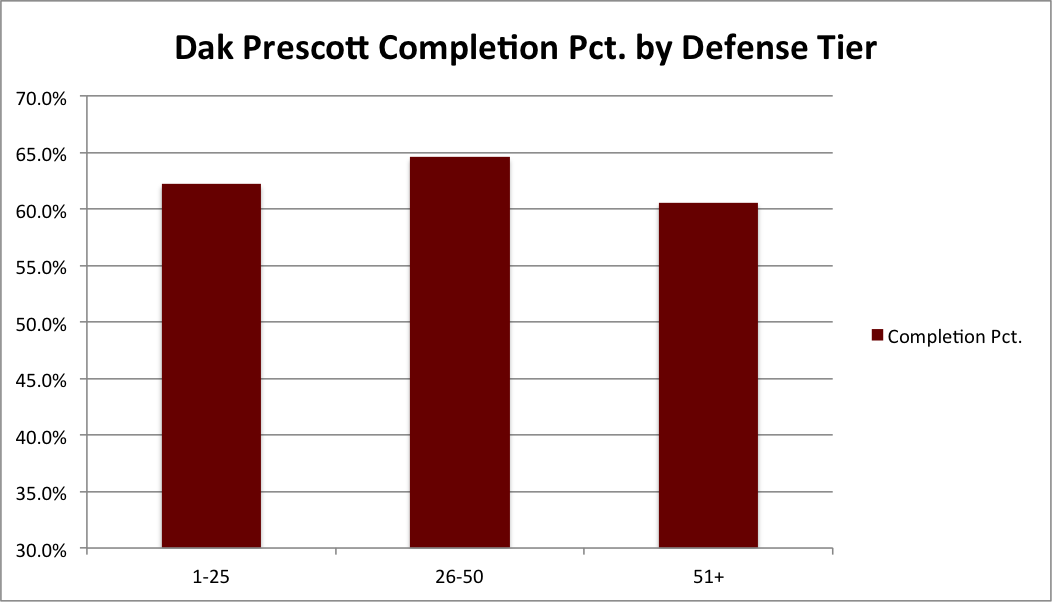 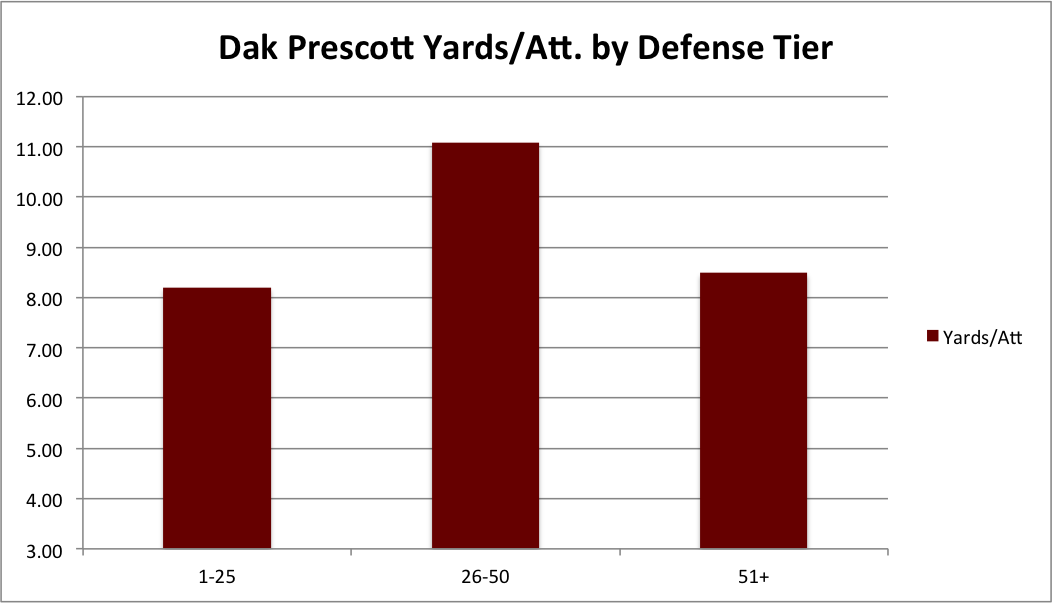 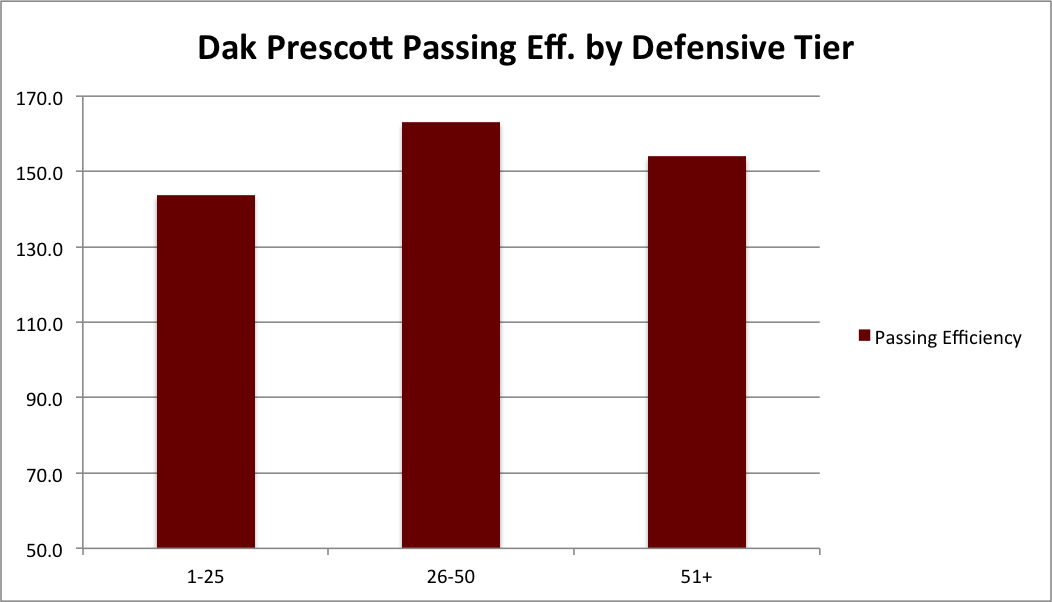 Allen didn't face a single mid-tier defense, believe it or not.

If you want to be optimistic about Allen this year, these figures offer you something. He was notably better against bad defenses, showing that he can hit over 60% with a 162.3 passing efficiency against something firmer than air. I don't think he'll hit those heights this year, but it's not hopeless either. That said, those are not pretty numbers against the top passing defenses, and he'll face a few of those in 2015. 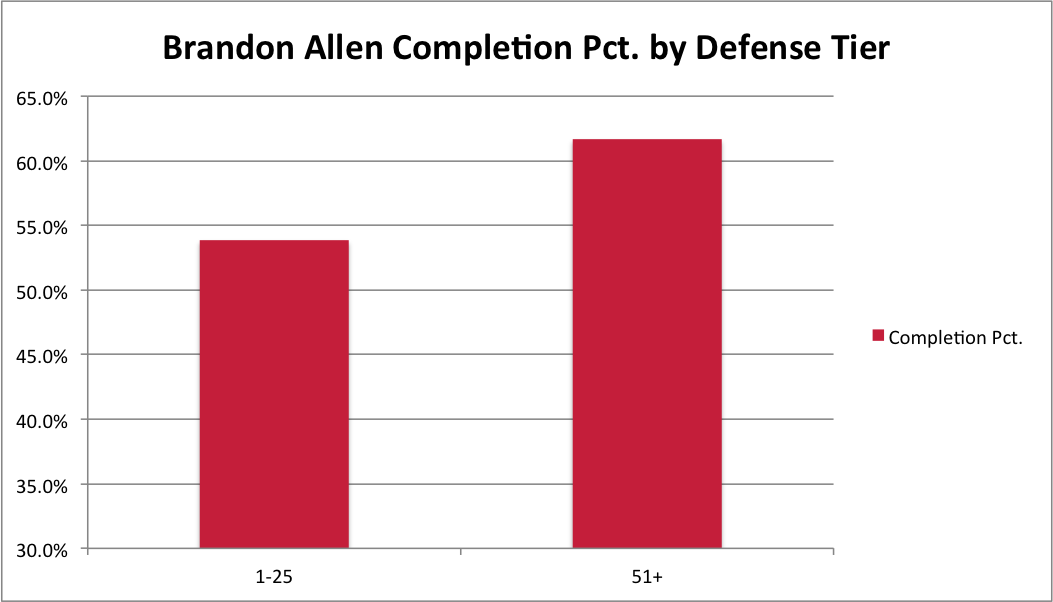 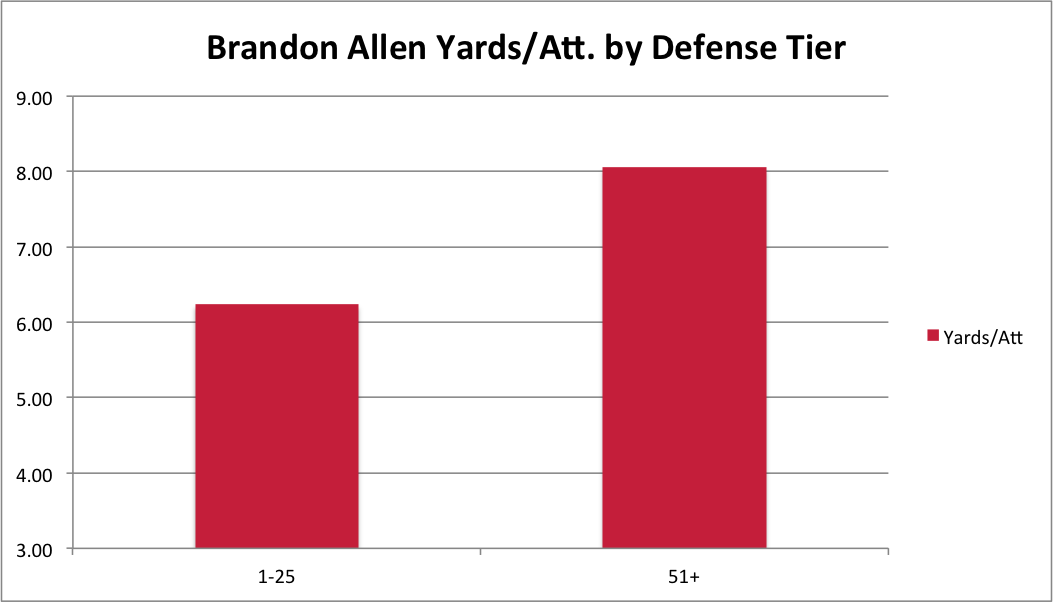 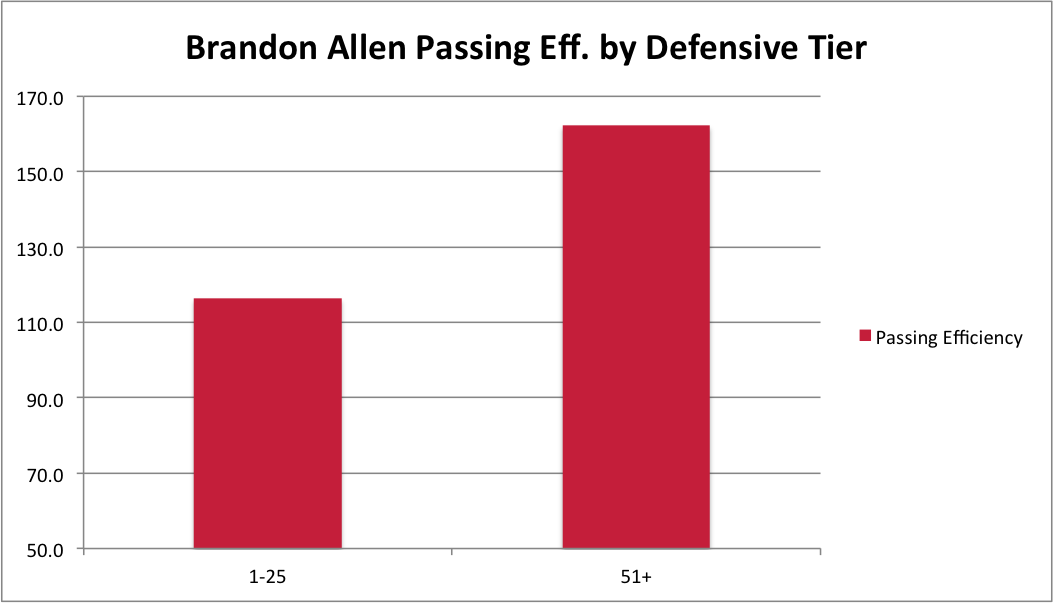 The story is somewhat similar with Mauk, though not to the same degree. He only faced one middle tier defense—Minnesota, in the bowl—so it's missing here too.

The erratic Tiger was just not good against the top defenses, and against the bad ones, he basically just completed more passes. They weren't for much more in yardage. The PE gains against bad defenses are better than declines would be, but one third of that is from the increased completion percentage and the rest is from throwing a bunch more touchdowns (20, versus four against the good defenses). 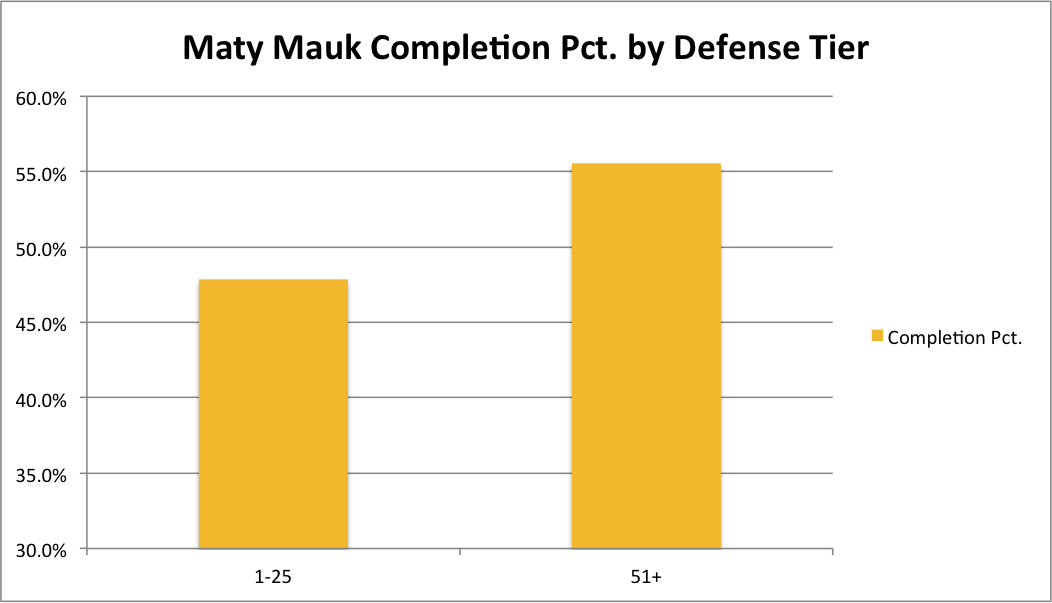 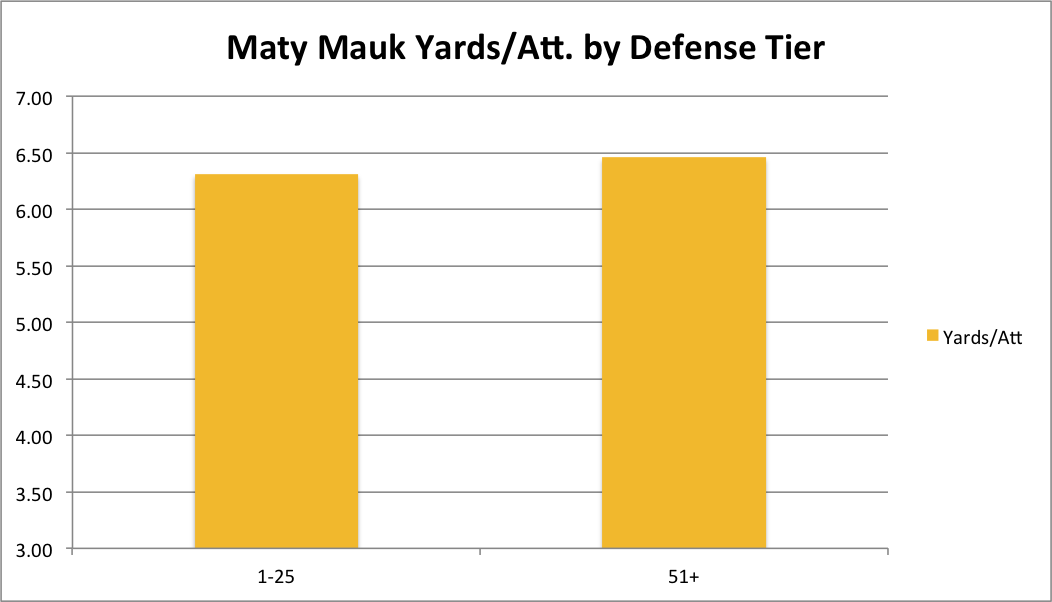 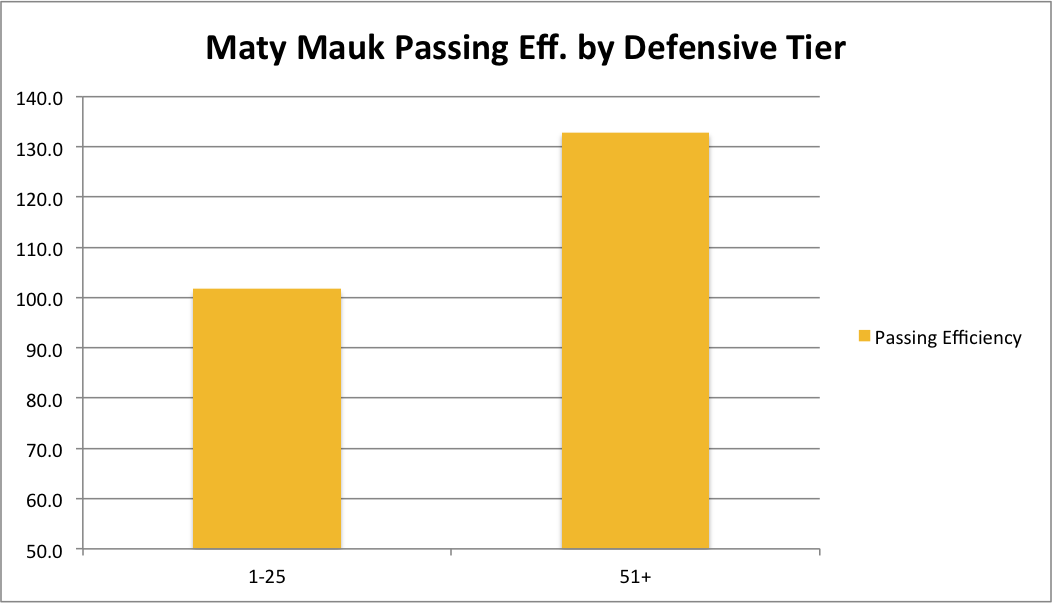 The Wildcats need steady quarterback play in their Air Raid offense, and they didn't get much of it from Towles against top defenses.

Kentucky was 0-7 against the teams from the top tier of passing defense and 5-0 against everyone else. As the passing game went, pretty much so did the team. 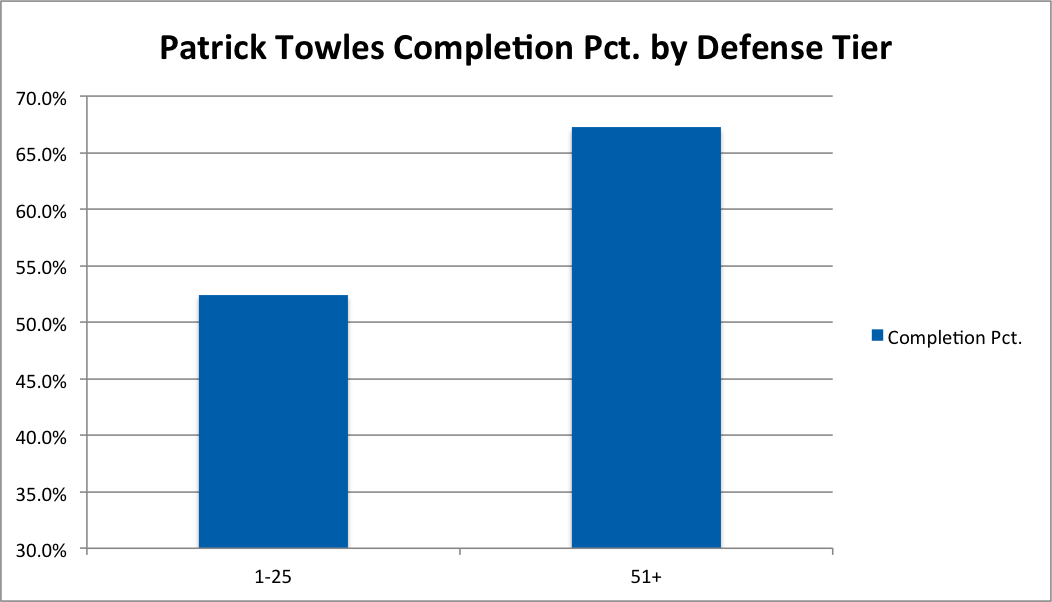 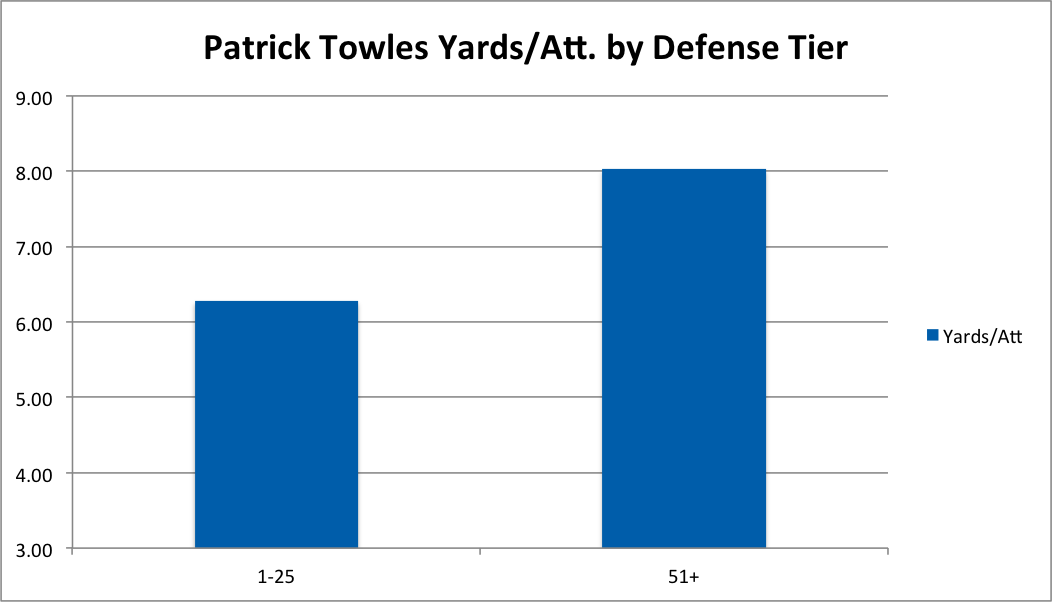 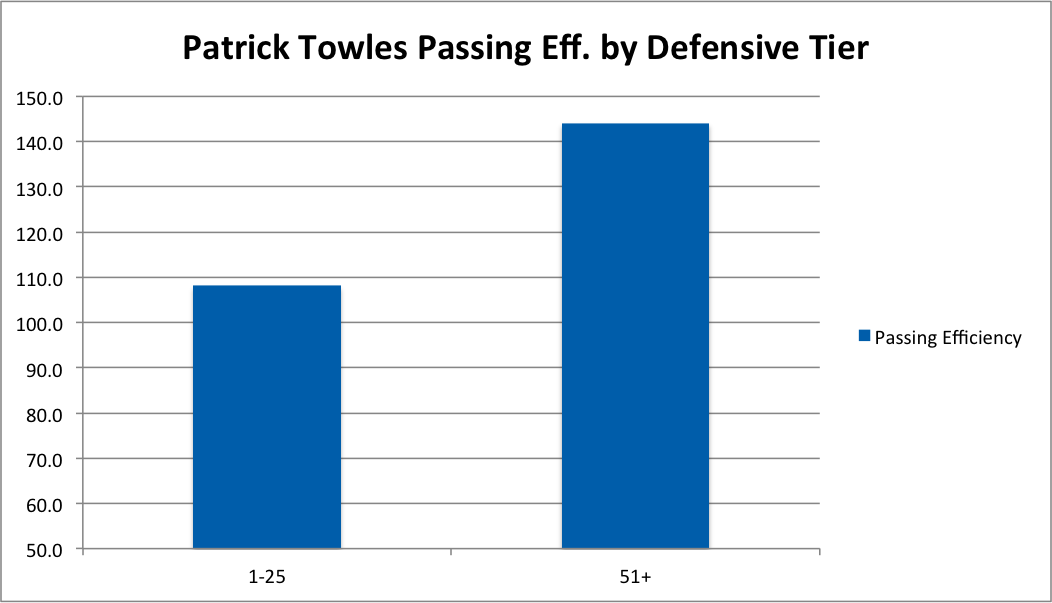 This is mostly for completeness's sake, since Brandon Harris has all but locked down the starting role. I think you'll see why Les Miles and Cam Cameron aren't terribly upset by that development.

I hate to use this kind of term for college students trying their best, but Jennings was just putrid against top defenses last year. There really isn't anything here to defend him. He had to use the advantage offered by the lower tier defenses just to get up to mediocre. 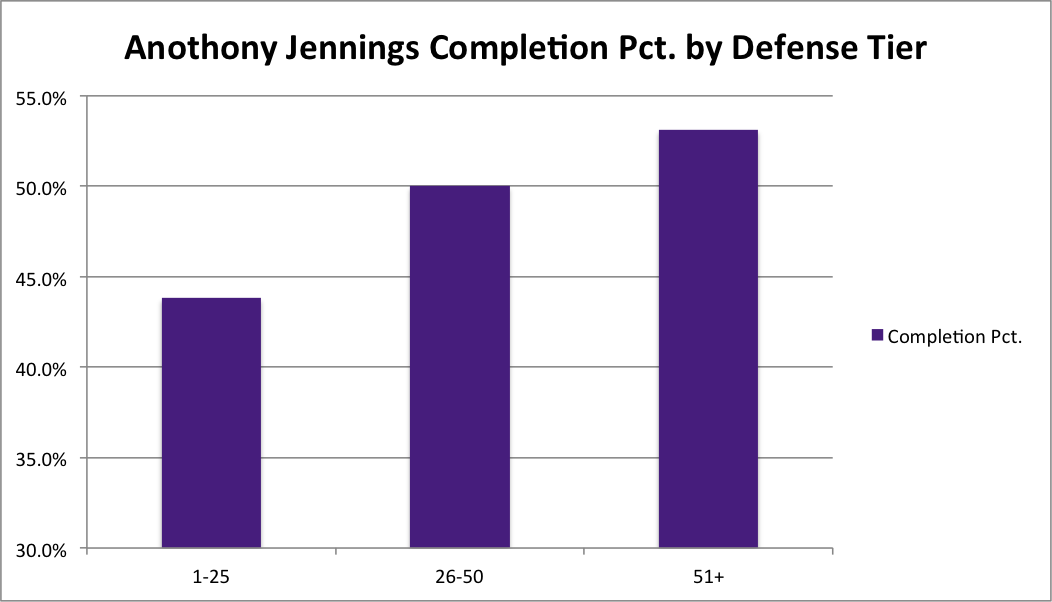 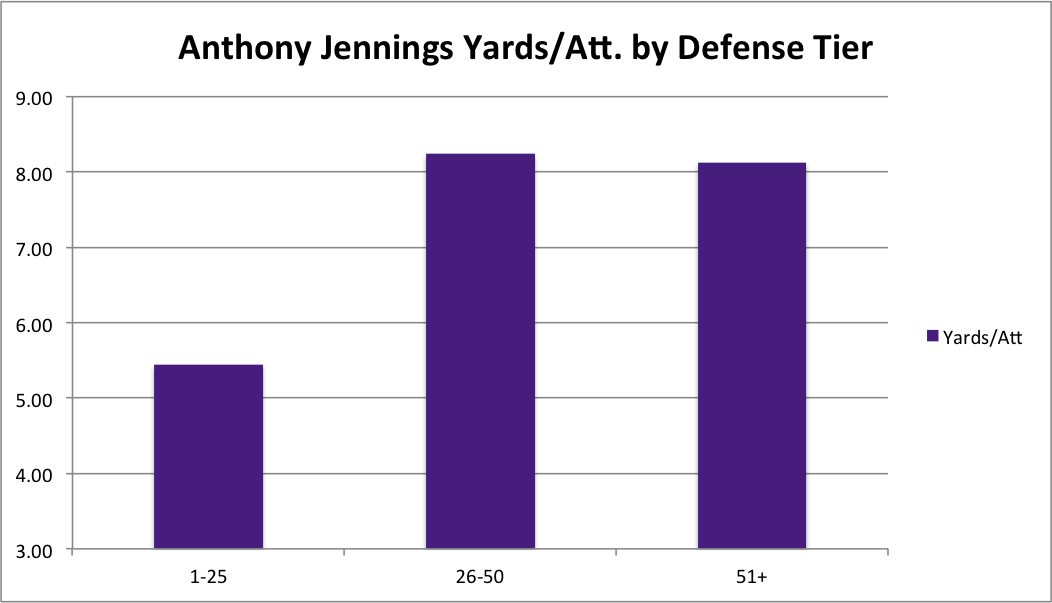 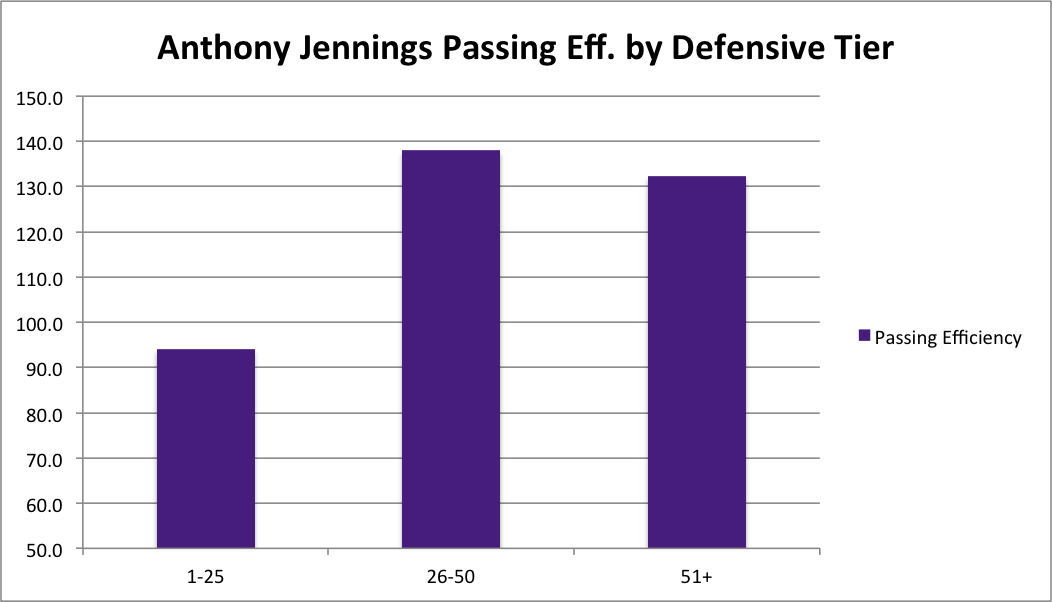 Here is a look at the five quarterbacks and the differences between their performance against the worst tier versus the best tier of defenses.

The most consistent guy was Prescott, as I mentioned above, and he was the only one of these guys to finish in the top half of starting quarterbacks in 2014.

The least consistent in terms of passing efficiency, which is how this table is ordered, was Allen—and that's a good thing! You don't want to see a quarterback be consistently bad. Look at Towles, too. He was up at 67.2% against bad defenses, showing an ability to be accurate at least some of the time. The most worrying line here is Mauk's, as he was bad against good defenses and didn't show much of a pop against the bad defenses.

Just a little food for thought as we enter the upcoming season.