The Aggies descend into Tiger Stadium.

Things were going so smoothly in Baton Rouge. Then, November arrived.

LSU is currently on a three-game skid. Les Miles is maybe but definitely not but probably on his way out. Leonard Fournette, unthinkably, did not score a touchdown last week. The nation's No. 2 team from just a few weeks ago is now unranked.

Meanwhile, Texas A&M just blanked Vanderbilt and is looking to make it a nine-win regular season. Here's to what should be an action-packed evening at Tiger Stadium.

1Three straight: LSU has lost three in a row. Yes, we know. But the Tigers have also won all three contests over the Aggies since the conference expanded from 12 to 14 teams. Last season, Miles and company got the road win, 23-17.

2Chasing history: Fournette might just rumble his way into the record books on Saturday. If No. 7 racks up at least 105 yards on the ground against the Aggies, this program will have a new record holder for most rushing yards in a single season (Charles Alexander currently holds the record with 1,686 rushing yards in 1977).

3Kyle or Kyler?: Apparently it's Kyle getting the start on Saturday. Kyle Allen, that is. The Aggies QB completed exactly one-half of his passes against Vandy last week, piling up 336 yards and a TD through the air. The LSU defense is allowing 216 yards per game through the air.

4Red zone woes: LSU has the sixth-worst red zone defense in the FBS. Meanwhile, Texas A&M barely managed to crack the top 100 in the FBS for red zone offense.

5Special teams: Place kicking, to be specific. A&M's Taylor Bertolet kicked six field goals against Vandy last week, while LSU's Trent Domingue has only missed one field goal this season. This game could very well come down to the wire, in which case either Bertolet or Domingue could end up playing the role of hero.

Tra Carson, RB, Texas A&M: He has the opportunity to make it five straight games with over 100 yards. The Oregon transfer needs just 10 yards to reach 1,000 rushing yards on the year. He is a reliable ballcarrier who has also proven to be a capable receiver coming out of the backfield (27 receptions this season). 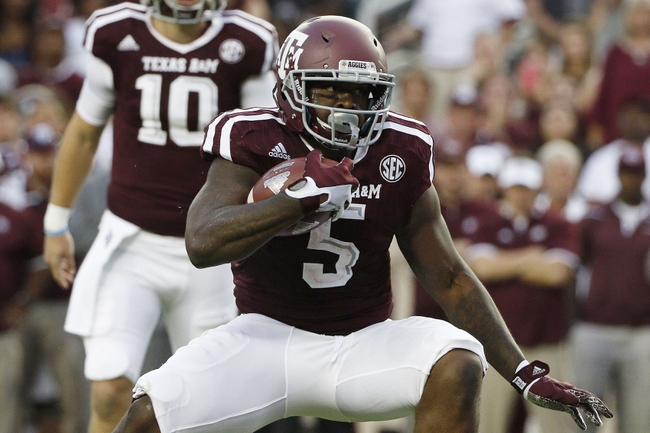 Malachi Dupre, WR, LSU: LSU wideout Travin Dural is out for the remainder of the season with a hamstring injury. He was the Tigers second-leading receiver. The team's third-leading receiver? Fournette. Dupre, Brandon Harris' top target this season, figures to be leaned on quite a bit in the passing game.

Myles Garrett, DL, Texas A&M: The true sophomore continues to dominate. 11 sacks in 11 games (and counting). A&M's No. 15 will need to wreak some havoc in order to slow down a run-heavy LSU attack.