For the second consecutive season, Ole Miss and Mississippi State enter the final Saturday of the regular season with the potential of an SEC divisional title on the line.

The last few seasons have offered a high point in a series between teams that have generally not been near the top of the SEC or their division collectively near the end of the regular season. But the past few years have changed that and have offered a storyline entering each matchup. The 2012 and 2013 games featured upsets with the underdog achieving bowl eligibility as a result while the 2014 game offered the Bulldogs a chance of winning the SEC West with a win over the Rebels and an Auburn win over Alabama.

This season offers the inverse opportunity in the Egg Bowl as the Rebels need the win, along with--again--an Auburn upset of Alabama, to advance to Atlanta next week. The TV schedule for the day is, however, less favorable for the viewer as CBS elected to take the Iron Bowl and ESPN slotted the Egg Bowl as a night game thereby depriving the game of one of its major storylines at kickoff time if Alabama wins as expected. But if Auburn is pulling a second half upset or the game is close, the tension in Starkville will ramp to an even higher level than it has been at for Egg Bowls since Dan Mullen arrived in 2009.

1Ole Miss' Opportunity. For Ole Miss, this week's game offers the first opportunity to advance to the SEC title game in the final weekend of the regular season since 2003. That matchup featured a two win Mississippi State team and was never in doubt on a rainy night in Starkville as David Cutcliffe and Eli Manning sent Jackie Sherrill into retirement with a 31-0 loss. Since then, the closest the Rebels have come to winning the SEC West was 2008 when Houston Nutt's first squad started 1-3 in conference before winning their last four SEC games to finish 5-3 and second in the West behind Alabama with the remainder of the West under .500 in league play.

2Dak's Last Home Game. Two seasons ago against Ole Miss, Dak Prescott made himself known on a national stage on Thanksgiving evening by coming off the bench and leading the Bulldogs to a come from behind overtime victory to seal bowl eligibility for the Bulldogs. Since then, he has taken over the quarterback record books at Mississippi State as the holder of practically every record and has led back to back seasons with at least eight wins for the Bulldogs for the first time since a three year stretch from 1998 to 2000.

3And Dan's Too?? As with several of the past few seasons, Dan Mullen seems to be a popular target for the rumor mill of college football coaches. With Mullen a rumored target at Virginia Tech and Southern Cal this week, along with a potential opening at Virginia, several jobs look like they could be ripe for Mullen to take. But would he? Under his leadership, Mississippi State has become a top job nationally, while simultaneously being a bottom half job in the SEC West. With the loss of Prescott and coming off the two best seasons of his tenure in Starkville, does Mullen feel that the time is right to depart?

4A Shootout in Waiting? While both defenses have had decent moments this year, both have struggled against the pass at times. In SEC play though, both defenses rank in the middle of the pack among SEC defenses even after both gave up career days to Brandon Allen in the past few weeks. In terms of yards per attempt, both teams have given up 6.5 yards per attempt (tied for fifth in the SEC in conference play) with the Rebels facing over 70 more passes leading to them giving up significantly more overall yards. Regardless of the stats though, a high scoring affair would be far from a surprise.

5Sugar Bowl on the Line? Or At Least Bowl Seeding. Regardless of the outcome of Ole Miss' chase for the West, both of these teams could be in the running for a New Years Six berth in the Sugar Bowl. Presuming an SEC team makes the playoff in the form of most likely Alabama, the next highest seeded SEC team is placed in the Sugar Bowl against a Big 12 foe. While Florida dropped four spots this week to 12th after struggling with Florida Atlantic, Ole Miss and Mississippi State rose to 18th and 21st respectively. If Florida falls to Florida State and Alabama and looks like it did against Florida Atlantic, they could suffer a precipitous drop and open the door for one of the Mississippi fanbases celebrating New Years on Bourbon Street.

Robert Nkemdiche, DT, Ole Miss: The two defenses that have probably most troubled Dak Prescott this season have been Alabama and Texas A&M. Both offered a solid pass rush which offered matchup problems for Mississippi State's offensive line. With Nkemdiche's quick first step, he can often be in the backfield quick enough to disrupt a play before it forms, but can struggle with finish plays. Regardless, if he can get in the backfield early and often to keep Prescott unsettled, it could be a long night for the Bulldogs' offensive line.

Brandon Holloway, RB, Mississippi State: The last team Ole Miss faced with a competent offense was Arkansas and Arkansas tortured Ole Miss' defense with short routes to backs and tight ends to open up the deep passing game for the outside receivers. Holloway has 24 catches and three touchdowns on the season, so he is one to keep an eye on along with freshman receiver Malik Dear and tight end Gus Walley to try to stretch the Ole Miss linebackers. 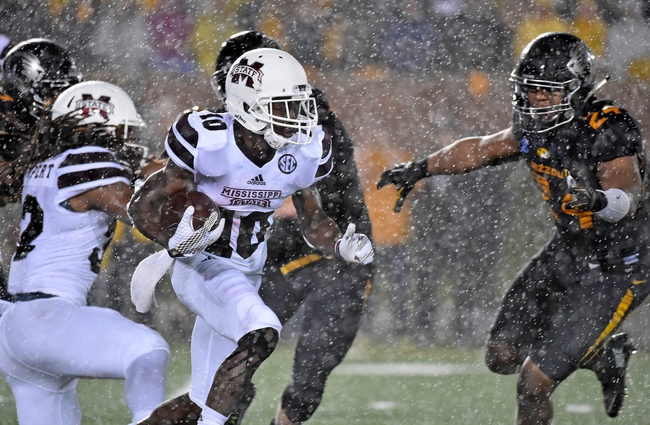 Jaylen Walton, RB, Ole Miss: Since Laremy Tunsil's return from suspension earlier this season, the Ole Miss running game has gained a spark that it was lacking for the first half of the season. The Rebels have run for at least 150 yards and have totaled eight touchdowns in their last four SEC games. Walton ran for 75+ yards in three of those games and had a career high 148 yards in last year's Egg Bowl.

The homer in me thinks Ole Miss can win, but the pragmatist knows the reality of the home field advantage in this series. Until a road team pulls an upset when the teams are relatively even matched, I have a hard time predicting that. Mississippi State pulls it out late. Mississippi State 45, Ole Miss 41