If you don't follow it here at Team Speed Kills, every week a power poll is tallied amongst various SEC bloggers to give their rankings of SEC schools. All season, a certain member of the commentariat who is an Arkansas fan has felt that the Hogs have been underranked, but will not have to face that any longer after Arkansas ran up a dominating 31-14 victory Saturday night at Tiger Stadium over LSU.

The loss knocks the Tigers out of SEC West contention after being in poll position eight days ago before their loss to Alabama, while continuing Arkansas' reputation under Bret Bielema as being a team no one wants to play in November. 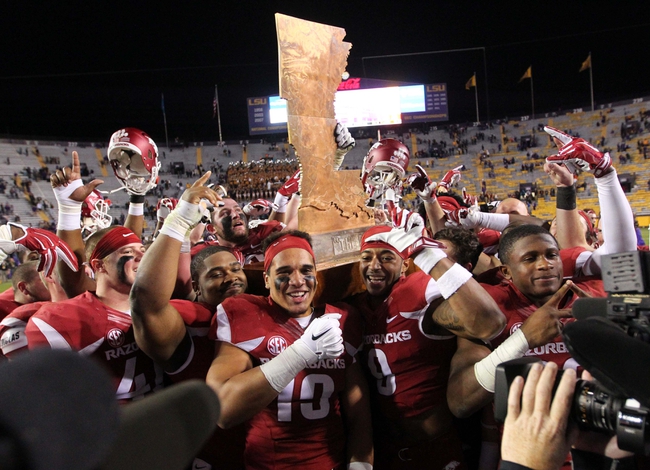 The Razorbacks' domination took place on both sides of the ball. Dan Enos' offense did not sport impressive passing numbers, but the scoring was opened with a 52-yard touchdown pass from Brandon Allen to Dominique Reed. On the day Allen finished with only 141 passing yards (9-of-16) with the aforementioned touchdown and an interception, but Arkansas did not really need to pass the ball, as they ran for nearly 300 yards on 40 carries.

Included in those rushing numbers are a pair of long, backbreaking (for LSU's defense) touchdown runs from Alex Collins and Jared Cornelius. Collins ran 80 yards for the Razorbacks' second touchdown of the evening as part of a 141-yard, two-touchdown day for the junior running back. Cornelius' 69-yard touchdown run came as the wide receiver came on a sweep early in the fourth quarter to cap the scoring.

The Arkansas defense entered the game with only eight sacks on the season, but sacked Brandon Harris five times tonight against a struggling offensive front for the Tigers. After losing tight end Dillon Gordon earlier in the season, the Tigers saw left tackle Jerald Hawkins leave tonight's game with an apparent ankle injury. LSU's front struggled to both block in the passing game and open holes in the running game. Fournette picked up 91 rushing yards, but was held well under his season average for the second straight week. 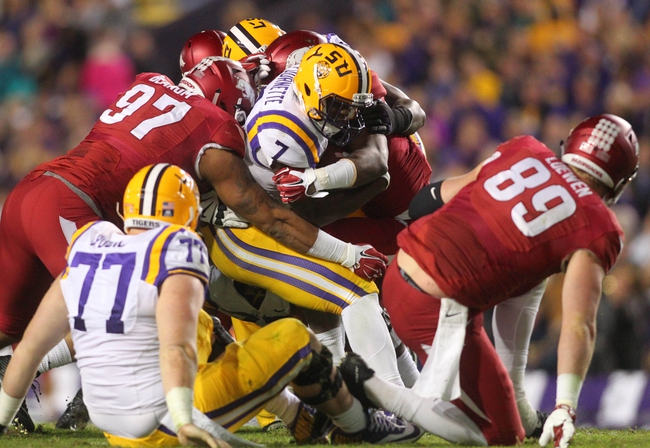 Entering the game, I posed that LSU could suffer a let down as a part of Bruce Feldman's body-blow theory. That appeared to be correct, as the Tigers never really looked to be physically or emotionally in the game and allowed Alabama to beat them twice and, at the same time, knock the Tigers completely out of the SEC West race. Now they have to travel to Oxford for a rivalry game to face an Ole Miss team that should be looking for revenge for last year's loss as well as the Rebels' loss to Arkansas a week ago.

Arkansas, meanwhile, has Mississippi State and Missouri to play and, after digging a hole in their non-conference slate and starting out 2-4 overall, has now won four in a row and could finish again as one of the hottest teams in the country with potentially six straight wins to end the regular season. If not for an overtime loss to Texas A&M, the Razorbacks could be looking at worst at a share of the SEC West (and still can with an Alabama loss to Auburn in the Iron Bowl) but can still get to a solid game and show improvement on last year's 6-6 regular-season outcome.