After last week's loss to Alabama, LSU will be looking to bounce back against an Arkansas squad which has to be coming into the matchup buoyed by its overtime win over Ole Miss. LSU could still win the SEC West, but would need to win out against Arkansas, Ole Miss and Texas A&M while hoping for an Alabama loss to either Mississippi State or Auburn.

1Body Blow Theory? If you're not familiar, Fox's Bruce Feldman put out a theory a couple of years ago that he called his "Body Blow Theory." It was based on Stanford, but went that teams suffered poor performances and results the week after playing Stanford as a result of the physical toll that was inflicted by the Cardinal the week prior. Other writers and commentators have spread that theory to other teams since then and it seems like a perfect analogy for this game. While Arkansas could come into the game hungover after an uptempo, high-scoring overtime game, the Arkansas-Ole Miss game was not the most physical. But, LSU comes in after an emotional and physical beatdown from the Crimson Tide. Will the Tide end up beating the Tigers twice as a result?

2Bouncing Back. Arkansas comes into the game ranked 97th in the S&P+ defensive rankings and 115th in the passing defense S&P+ rankings. Granted, those rankings may be somewhat skewed by facing a Texas Tech team that can move the ball well and a trio of overtime games against Texas A&M, Auburn and Ole Miss, but after losing four defenders in the last NFL draft, Arkansas' defense has struggled in 2015. LSU's quarterback Brandon Harris is coming off his worst performance of 2015. Will he be able to bounce back against the Razorbacks shaky defense or will he rebound?

3The Flip Side. LSU, meanwhile, comes in with the seventh ranked S&P+ passing defense nationally, but the Tigers have not faced nearly the quality of passing offenses that the Razorbacks have. Brandon Allen has emerged as one of the top quarterbacks in the SEC in 2015 and with the loss of Jonathan Williams, the Razorbacks have been throwing the ball more. The Razorbacks are averaging almost three more passing attempts per game over last year (and five more over 2013), but their yards per attempt has grown from a pedestrian 6.8 in 2014 to 9.3 in 2015. That 2015 per attempt average is the highest in the SEC and tied for 10th nationally. For a team that had major question marks at the receiver positions entering the year, the Arkansas offense has emerged quietly as one of the top passing games in the SEC, but will face a stout challenge against a very good LSU defense.

4Heavy Boot. Saturday marks the 61st meeting in series history and 20th game for the "Golden Boot," trophy which takes the outline of the two states as its shape and is believed to be the heaviest trophy in college football weighing in at nearly 200 pounds. LSU leads the all-time series 37-21-2 and, since The Boot was instituted in 1996, LSU leads 12-7. 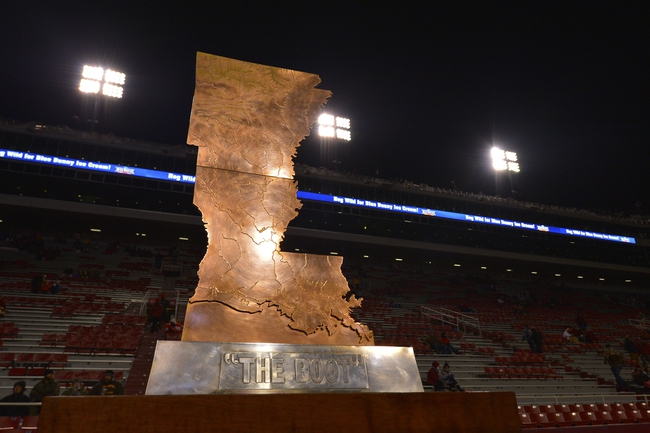 5The Vegas Line. LSU comes into the game as a 7.5 point favorite and the over/under is 54 with 55% of bettors taking the Tigers and 94% hammering the over. Against the spread, Arkansas is 7-1 in their last eight games against LSU and 4-1 on the year in SEC play. I would tend to agree with Arkansas history and lean on them to come within a touchdown, but we all know the history of Saturday night games in Baton Rouge and many of the recent games in this series have taken place as day games after Thanksgiving. Could the nighttime aura of Death Valley push on the Tigers to a rousing victory which could (if Mississippi State can upset Alabama) see them right back in the SEC West race?

Leonard Fournette, RB, LSU: Of course the Heisman Trophy frontrunner prior to last week should be one to watch, but how will he and the LSU offensive front rebound after being held more than 120 yards under his season average by Alabama? Arkansas, obviously as arguably no one else in college football does, does not boast the same skill or pedigree up front as Alabama, but will be looking to slow down the sophomore from New Orleans. Fournette is expected to play after an ongoing investigation into alleged potential NCAA rule violations, but his status is certainly one to keep an eye on.

Dominique Reed WR, Arkansas: Drew Morgan is the Hogs' leading receiver, but Reed has emerged as a consistent target of Brandon Allen's the last few weeks. After only three catches through the Razorbacks' first five games, Reed has caught three or more balls in each of the last three SEC games including a season high seven catches for 105 yards and a pair of scores in last week's win at Ole Miss. Reed quietly has five touchdown grabs on the season and has enjoyed a breakout season as another option behind Morgan and tight end Hunter Henry.

Travin Dural and Malachi Dupre, WR, LSU: LSU's leading receivers will be looking to feast on weakness of Arkansas's secondary and to have big games if Harris can deliver. Dural is LSU's leading receiver in catches and yards, but look for LSU to try to get Dupre the ball deep early to stretch the field and open up the Arkansas defense.

There's something different about this Arkansas team that, despite their 2-2 non conference record and poor start to the season, gives me more confidence in them than even the end of last season when they were rolling. However, LSU rides the Saturday night atmosphere in Baton Rouge and Les Miles pulls out some late Les Miles magic as the Tigers pull out a tight one. LSU 34, Arkansas 31