The division is on the line, for all practical purposes.

The World's Largest Outdoor Cocktail Party match between the Florida Gators and Georgia Bulldogs hasn't been a deciding game in the East division as much as you might think. Ron Zook was in Gainesville during the best stretch of Mark Richt's tenure, UGA hit the skids during Urban Meyer's heyday, and Will Muschamp re-entered the rivalry as the Bulldogs were pulling out of that decline. 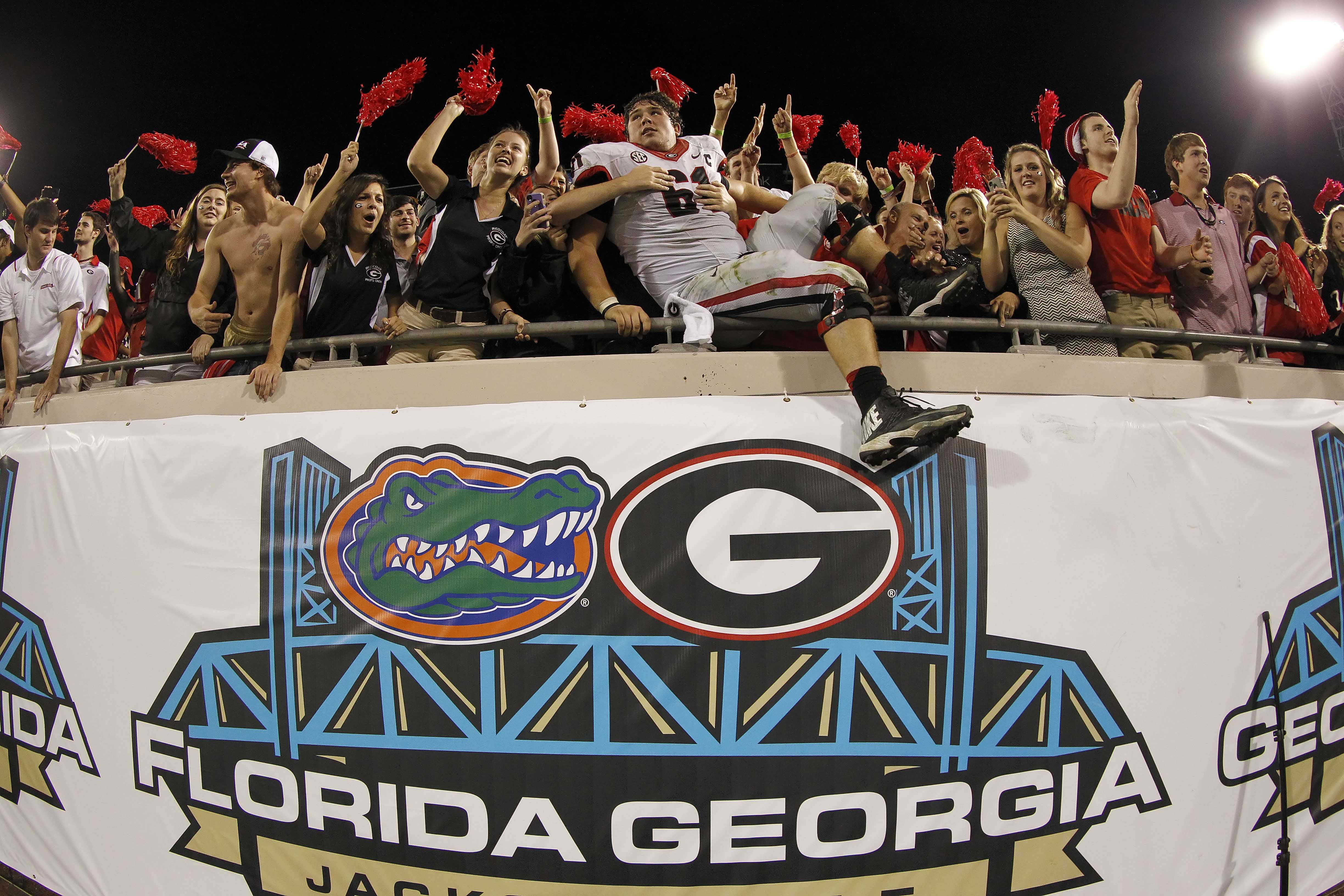 So for the first time since 2012, this season's edition has the fate of the East division hanging in the balance. Florida will all but clinch with a win, as it'd move to 5-1 with only South Carolina and Vanderbilt remaining on its conference slate. The Gators can't mathematically clinch because Vandy only has three SEC losses so far and therefore could theoretically win a tiebreaker at 5-3 by winning out, but a UF win will be the end of the race for all practical purposes.

Georgia, despite the depths of despair it sunk to in the Alabama loss, would move into first place in the East thanks to owning the tiebreaker over Florida. The remainder of UGA's SEC schedule consists of a home game against Kentucky and a road trip to Auburn, both winnable contests for the Bulldogs.

Nothing is set in stone and nothing can be decided for sure this weekend, but the winner of this game will likely earn a spot in Atlanta once all is said and done. If you like your rivalries with extra incentives, this game is for you.

1Greyson Lambert vs. the Florida secondary Much of the intrigue of this game revolves around the pass, and I'll begin with Georgia's quarterback. He had a much ballyhooed start to the season with high completion percentages against bad defenses, but in the first half of the Alabama game before it truly got out of hand, he threw for 4.1 yards per attempt and had a passing success rate of just 5.9%. He was just dreadful against the great Tide pass defense, and Florida sports a usually great pass defense as well. If he can't find a better way to attack a good defense, it's over.

UPDATE: Reports say that Georgia will start Faton Bauta at quarterback. Whether he plays all game or not is yet to be seen.

2The once-great Florida pass defense The Gators' secondary has been unsettlingly inconsistent for a unit supposedly full of guys who'll play a lot on Sundays. It allowed a pair of 50+ yard completions last time out against LSU, and one of them was completely inexcusable. Even without those two long bombs counting, Brandon Harris completed 65% of his passes for a passing efficiency of 152.9. Now, UGA only has one receiver who'd start for LSU in Malcolm Mitchell, so the task isn't as steep. Still though, which Florida defensive backfield shows up will carry a lot of weight in this game.

3Treon Harris vs. the Georgia pass defense Harris was the quarterback in Florida's memorable upset win in this game a year ago, but Florida's triumph mostly had to do with Georgia's run defense completely no-showing. Harris only threw six passes in the win, and that almost seemed like more than required. He was serviceable in his first full game against LSU, but he did take five sacks. He had eight completions of at least 15 yards while completing just 53% of his passes. If he can't find more consistency, it could cost the Gators in a close game.

4Georgia's air defenses Secondary is supposed to be Jeremy Pruitt's specialty, but the Bulldogs are sitting at 80th nationally in S&P+ pass defense right now. The Bulldogs can put some pressure on the quarterback, and that will come in handy against a makeshift Florida offensive line and the QB who took those five sacks in his last outing. Even so, Jake Coker had far and away his best game of the year against this UGA defense. If the same can be said about Treon Harris, UF will run away with the game.

5Can anyone run? Sony Michel is a good running back, but it's not the same for the Bulldogs without Nick Chubb alongside him. Kelvin Taylor is easily having his best season in orange and blue, but that is a superlative that must be calibrated for the lowered expectations coming from spotty line play. Taylor at least will get help from the mobile Harris, while the statuesque Lambert won't offer Michel a lot of help carrying the ball. If one of the teams can establish a ground attack, it'll do a lot to make it past some of the pass game questions I outlined above.

Antonio Callaway, WR, Florida: The true freshman is having an outstanding season so far, and it'll be in the running for best ever by a freshman receiver in Gainesville if he keeps it up. Callaway generates big plays not just in the pass game but also in special teams as a dangerous returner. A lot of the post-2009 offensive struggles Florida has had came down to not having reliable playmakers, but it definitely has one in Callaway.

Jordan Jenkins and Leonard Floyd, LBs, Georgia: Jenkins and Floyd are the latest in a long line of outstanding linebackers in the red and black. They've been able to terrorize other teams' backfields with three sacks apiece to go with 13.5 combined tackles for loss. They're the most disruptive presences on the field whenever they go out there, and they'll need to be in top form to help out the shaky guys out back behind them.

Jonathan Bullard, DT, Florida: Bullard has at times looked like one of the best interior linemen in the country. He was particularly great in Florida's huge win over Ole Miss at the beginning of the month. Few get off the line quicker, and he's fast enough to chase down Michel on runs outside the tackles. If he can pressure Lambert, it will only reinforce the good pass defense the team has.

With a couple of weeks to work out the issues exposed in the LSU game, Florida's secondary shows up ready to play. With Lambert unable to make headway through the air, the rest of the Gator defense is able to key on the run and shut it down too. Florida's offense will do just enough to pull away with a victory. Florida 24, Georgia 13