Possibly Tom Herman's first and last game against an SEC opponent! (Coach pictured above is not Tom Herman)

Share All sharing options for: Vanderbilt Commodores vs. Houston Cougars: Start time, TV coverage, How to Watch Online, and More

Vandy shots-caller Derek Mason suggests Houston is under more pressure to win this weekend than his team. This is fine, because yeah, Houston is undefeated and good. And if a hell a lot of things bounced the right way, and hell a lot more things after that, then sure why not, maybe Houston finds itself on the playoff committee's list of teams to consider. 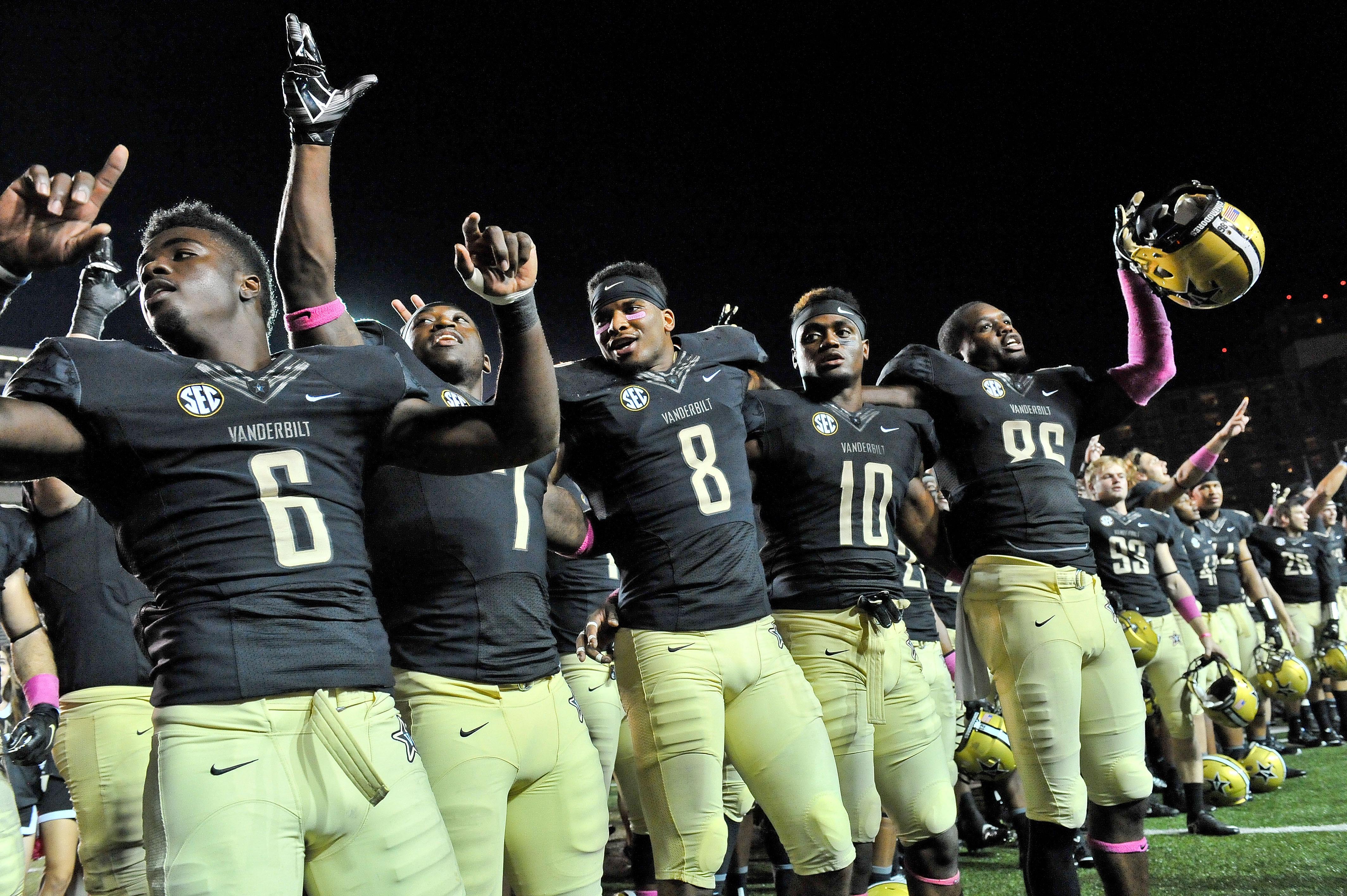 Such possibilities would put pressure on a team, I agree. But, assuming—and again, this is just my own assumption—Vandy wants to play past Thanksgiving weekend, then the pressure to win Saturday is coequal. Vanderbilt's remaining games after Houston are Florida, Kentucky, Texas A&M and Tennessee. As a reminder, the number of wins a team must accrue to become bowl eligible remains six; Vanderbilt has three wins this season.

I mention Vandy's win total, though, merely to point out that time—and for that matter, impending opposition—are not in the ‘Dores' favor. Because, looking past its record, Vanderbilt's season has been actually not shabby! I mean, besides an 18-point loss to Georgia that was close for some time, Vandy's been in every game it's played thus far. Last week, after 11 tries in a year-and-a-half, Mason won his first conference game. This was a good and significant win for a multitude of reasons, Mason's job-security not least of which. And, when a new regime assumes control over a program, there's oftentimes a win that's pointed to as the catalyst for a complete player buy-in, or a program-turning win, yada yada—you know what I'm talking about. Missouri might, maybe, be that game for Mason's team. Now, perhaps, they believe!

1Well first off, Houston's offense is awesome. Other than Baylor, no one's busted more ass than Houston this year: the Coogs have beaten five teams by 21 or more this season. And speaking of points, finding such hasn't been much problem for the Cougars, either: they average 47 a game, which is better than 124 FBS teams. There are 128 FBS teams. Of course, like Baylor, no one knows who the hell Houston's been playing so far; the Cougars might well be the season's longest running sham. To date, Louisville is the most intimidating defensive unit Houston's faced, and Louisville's defense by many metrics is only marginally intimidating. Greg Ward, Jr. quarterbacks the team, and he's done so to the tune of 1,734 passing yards and 677 rushing. He leads the nation in rushing touchdowns with 15, and leads the team—who ranks 7th nationally in rushing yards—in yes, rushing. Again, he's a quarterback. More on Ward, Jr. later.

2But Vanderbilt's defense is also really good! The reason for Vandy's not bad season thus far is undeniably its defense, ranked 13th (nationally!) in scoring defense. Though it happened sooner than some might've guessed, the 'Dores' turn as quite-capable defenders was expected eventually, what with Mason's defensive background and the Bible Belt's penchant for churning out defensive humdingers and whatnot. The Commodore D has been especially feisty on third down it seems. To wit, Missouri went O-fer in 14 tries last week.  In that same game, Mizzou managed only 188 total yards, a mere 80 of which rushing. I know Missouri's offense is god-awful, but damn. Anyhoo, Vandy's held every opponent it's faced thus far under that opponent's scoring average. This is a good stat.

3Who will start at quarterback for Vanderbilt? Does it matter? Vandy—or Mason, rather—remains undecided as to who will start the game at quarterback this weekend: "We'll continue to look at the best option, and the best option—who's had the best week of practice and managed the game—will be out there first," Mason said. The two candidates are Johnny McCrary and Kyle Shurmer. Shurmer got the start last week, supplanting McCrary after he threw a troika of picks the week before at South Carolina. Neither Shurmer nor McCrary did much in last week's win over Missouri, however (10-of-20 passing for 89 yards and zero touchdowns, 7-of-8 passing, 47 yards and also zero touchdowns, respectively; again, thank goodness for the defense). It doesn't matter who Vandy starts because both will probably play anyway. It doesn't matter who Vandy starts because neither quarterback will be the reason Vandy wins anyway.

4Vandy's main offensive strength opposes that of Houston's on defense. Houston is good at run-stopping, which sucks for Vanderbilt because running is their best thing, if not their only thing. Houston ranks eighth in the USA in terms of stopping runs. Ralph Webb, runner of balls for Vandy, has been solid this season in his role as "only credible threat not dependent on a QB passing him the football." Webb rushes on average, for 84 yards per game. Houston's defense typically gives up a little more than that (98.3 ypg), but in all likelihood, Webb won't make it much past that mark, if he even meets it at all. This could also be a hindrance to McCrary's usefulness, as his dual-threat ability is arguably the lone plus for the SEC's leader in interceptions thrown.

5Why yes, they have played before. But no, I don't remember the 2014 BBVA Compass Bowl, either. Here's a fine recap from the equally fine folks at Anchor of Gold, who probably actually witnessed the game: James Franklin's Commodores won their third bowl game since 2008 when they handed the Cougars a 41-24 defeat at the 2014 BBVA Compass Bowl. Vandy went up 24-0 at the half only to watch Houston score 24 straight points in one of the most Vanderbilt quarters of football to ever Vanderbilt. Patton Robinette completed only one pass in the second half, and it was to Houston defender Adrian McDonald. Fortunately for VU, the Cougars' final four possessions alternated interceptions and turnovers on downs to put a merciful end to an especially mediocre bowl game.

Greg Ward, Jr., QB, Houston: Ward, Jr.'s Heisman candidacy is a thing now, and say what you want about Vanderbilt's program, but the defense is today at least, legit. Should Ward do some things against this veritable SEC-good defense, then I'd imagine it would be taken under consideration in December should Houston not lose before then. This surely will be on Ward's mind, right? Anyway, a guy a who leads his team in both passing and rushing should always be watched, so watch Ward. 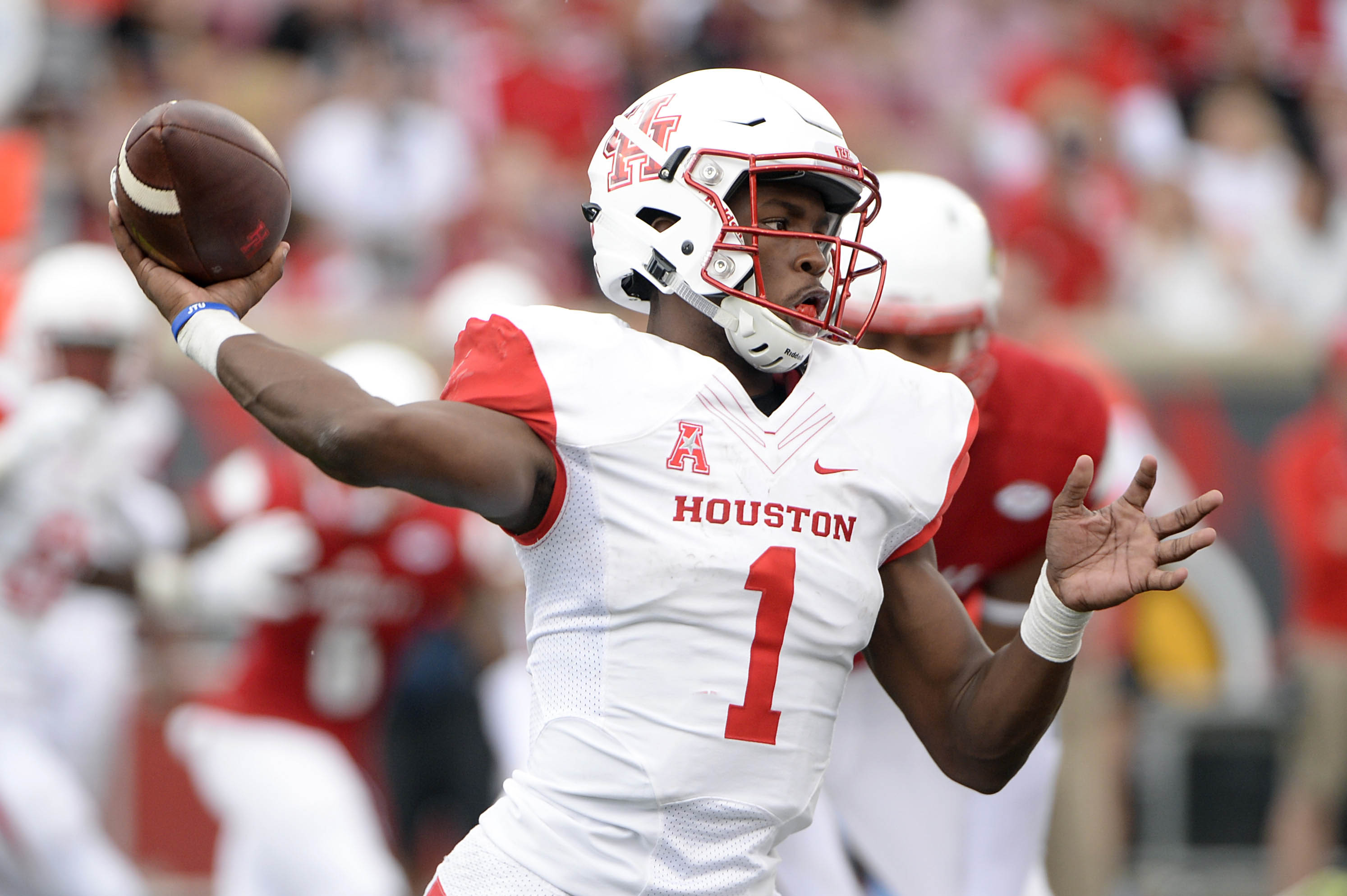 Zach Cunningham, LB, Vanderbilt: Assuming being the lead-tackler on a defense means the unit's success somewhat hinges on your performance, we'll put Cunningham here. Though Vandy's D inarguably poses the largest threat to Houston's O thus far, the converse is likely true also despite Vandy having played Ole Miss and Georgia, who can score sometimes when they want to. Cunningham will have a hell of a job on his hands having to deal with Ward's arm and legs. But with 50 tackles and two sacks to his name this year, one would assume Cunningham is at least up to the challenge.

Adrian McDonald, CB, Houston: McDonald is a Thorpe Award semifinalist, and if he grabs another pick this season, he will have done so more than any other Cougar in school history for a career. This is important to note, because Vanderbilt thus far—McCrary really, but still—is prone to giving the ball away. So you might see a record fall this weekend, and you might also see a guy not even tasked to score points leading his team to victory.

As it's done to opponents all season, I'll bet Vanderbilt holds Houston under it's scoring average, but not enough to actually win. The Vandy offense is just too terrible, really, to predict otherwise. Houston 38, Vanderbilt 10