Les Miles dialed up a fourth-quarter fake field goal and, Les being Les, it went for a game-winning touchdown

LSU beat Florida in a tight 35-28 contest that was at times as much a defensive struggle as expected and, for the second quarter, a high-scoring affair. And like all good sequels, the scriptwriter (in this case, LSU coach Les Miles) recalled a past version of this match-up for the touchdown that ended up winning the game.

With the game tied, LSU was marching towards the end zone around the beginning of the fourth quarter with a five-plus minute drive. LSU's drive stalled at the Florida 16-yard line and, pulling out a trick from the 2010 game's script, Miles opted for a fake field goal on 4th-and-13. Kicker Trent Dominique hauled in the pitch from the holder and rambled into the end zone to give LSU the lead for good.

Leading up to that, the game seesawed back and forth, with Florida holding the early momentum before it strongly swung back to LSU's favor. After an opening quarter which looked like this game would be the defensive struggle that many expected, Florida held a 7-0 lead. It marked only the second time in which LSU trailed after a quarter in 2015 following last week's first quarter "at" South Carolina. The second quarter, however, would change that dramatically. LSU responded with 28 second-quarter points while Florida added another score to leave the Tigers with a 28-14 halftime lead.

A seemingly crushing blow to Florida came with LSU up 14-7. After LSU took the lead off a Brandon Harris touchdown pass to Malachi Dupre and Florida's offense went three-and-out, LSU set up with a power formation with a single receiver. Florida was expecting a handoff to Leonard Fournette, and as he got it, the Gators' defense bit down on the run. But the Gators were not expecting Fournette to toss the ball back to Harris on a flea flicker. Harris placed a perfect deep pass to Dupre for 52 yards to the Florida 6-yard line.

On the next play Fournette had his second touchdown of the night to give LSU a 14-point lead that, given the expectations entering the game for Florida's offense against LSU's defense, looked possibly insurmountable. Fournette finished the game with a comparatively pedestrian 180 yards on 31 carries, but was kept from springing a long highlight reel-type run.

Florida responded to Fournette's second score with a big pass play of its own to set up a quick scoring drive. After Treon Harris scrambled from pressure, he spotted freshman receiver Antonio Callaway down the sideline and, after Callaway tried his best Laquon Treadwell impression, he tipped the ball to himself and hauled in a 48-yard catch which set up a Florida touchdown on the next play to bring the score back to within one touchdown.

LSU expanded the lead back to 14 points on the cusp of halftime after another deep pass to Dupre put him over 100 yards in the first half and gave him his second touchdown of the game. 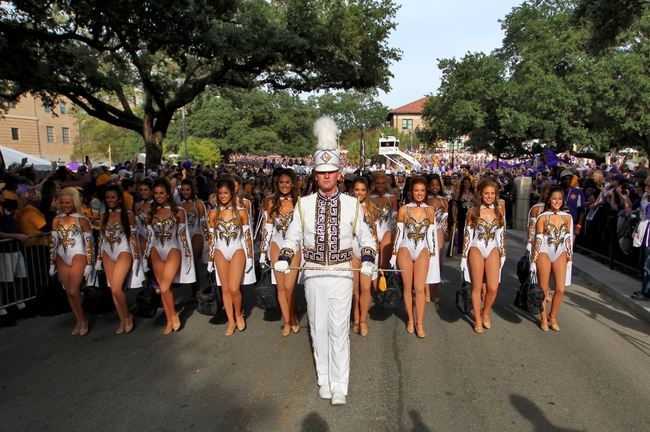 Callaway continued his big night in the third quarter with a game-tying 72-yard punt return to go along with 100 yards receiving on three catches. Saturday's game marks the freshman's second 100-yard receiving game of the season after eclipsing the century mark against Tennessee with his game-winning catch and run. Midway through the fourth quarter, Callaway had a chance at making an even bigger impact, but the 38-yard would-be touchdown pass was broken up by an LSU defender.

Could this game have been a preview of the SEC Championship Game in December? An LSU win probably helps it progress towards that end, as both teams control their own destiny. Between Oct. 31 and Nov. 7, much could be decided between the Georgia-Florida game and LSU traveling to Tuscaloosa to face Alabama (along with Ole Miss hosting Texas A&M, as one of them is guaranteed to take a second loss in SEC play next week and likely be eliminated from the West race).