A Top 10 match-up under the lights in Baton Rouge, as the annual game once again feels nationally relevant

Share All sharing options for: Florida Gators vs. LSU Tigers: Start time, TV Coverage, How to Watch Online, and More

After playing a "road" game in Baton Rouge against South Carolina last week, LSU hosts Florida in a heavyweight fight on Saturday night. Tiger Stadium will, of course, be rocking.

Florida leads the all-time series, 31-27 (with three ties mixed in there), but the Tigers have edged the Gators the past two seasons. Last year's encounter in The Swamp was an instant classic, with LSU kicker Colby Delahoussaye splitting the uprights with just seconds remaining to give the visitors the win.

Or perhaps it doesn't feel different at all. Perhaps football during the month of October has always been this fun.

1Unlucky 7: Florida's No. 7, QB Will Grier, is out of commission for a year after testing positive for performance-enhancing drugs. Grier had a 65.8 completion percentage through six games and turned in a monster four-TD performance against a talented Ole Miss defense at the start of the month. Treon Harris is a serviceable replacement who brings a unique skill set to the table, but the Grier situation is certainly unfortunate.

2Lucky 7: LSU's No. 7, RB Leonard Fournette, is running away with the Heisman at the moment, tormenting every defense in his path. Plenty of tailbacks in the FBS would be elated to finish the season with 1,022 yards and 12 TDs on the ground; Fournette has reached those totals in just five games. After averaging nearly eight yards per carry last week against South Carolina, Fournette will be put to the test against a tough Gators rushing defense ranked 12th in the FBS.

3The fight for DB U: Fans of both programs have already traded shots on social media about who gets to claim the mythical name. Joe Haden or Patrick Peterson? Matt Elam or Eric Reid? Vernon Hargreaves III or Tre'Davious White? A tradition of ballhawking greatness continues at these two programs. It could make life difficult for both aerial attacks, though that doesn't mean a great deal to LSU.

4OT Bookends: Both teams have freakishly athletic pass-rushers. For Florida, offensive tackles David Sharpe and Mason Halter will be responsible for keeping Harris upright. Meanwhile, LSU's Jerald Hawkins and Vadal Alexander will need to be alert in dealing with the rush in order to give Harris time in the pocket.

5It's gettin' real: This game isn't for all the marbles, but it's for a whole lot of them. Shakeup is inevitable at this time of year, and the winner of this game will catapult into full-fledged College Football Playoff discussions. As we reach the season's midpoint, results replace speculation. Quality becomes increasingly apparent. "Pretenders," though a mildly degrading term, are ruthlessly labeled. "Contenders," however, become momentum-filled machines that could not care less about anything aside from dominating. With that said, Saturday's game should be a reasonably good one. 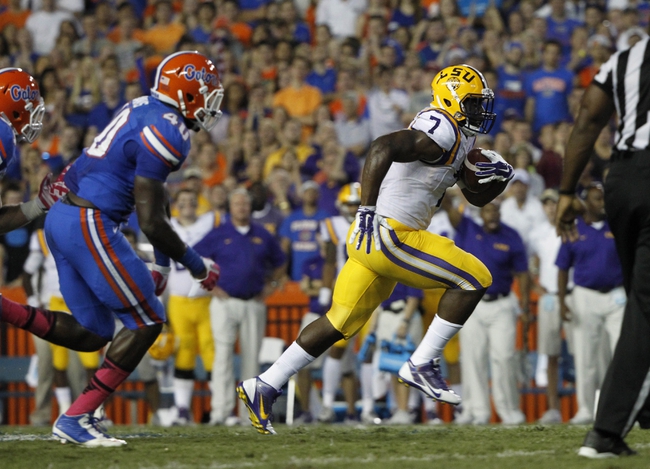 Alex McCalister, DE, Florida: After missing the season opener, McCalister has dominated at weak-side defensive end for the Gators. Bryan Cox Jr. has also looked strong coming off the edge, but McCalister has registered four sacks in five games and will give LSU's O-line all it can handle.

Jalen Mills, S, LSU: The standout senior defensive back looks set to make his return on Saturday. Mills has been sidelined this season, as he has been recovering from a fractured fibula. 62 tackles in 2014. 39 career starts. Welcome back, sir.

Kelvin Taylor, RB, Florida: The Gators running back will take loads of pressure off of Harris if he can get going early. Taylor has proven that he can handle a heavy workload (55 carries for 182 yards in the past two games) and that he is a reliable go-to in the red zone (seven TDs this season).

In a close game, LSU QB Brandon Harris takes care of the football and makes enough big plays to give his team the edge. The Tigers remain undefeated. LSU 27, Florida 24.