Two teams standing at a crossroads.

The Auburn Tigers travel to Lexington to face the Kentucky Wildcats tonight. Auburn is in the midst of a disappointing season, while Kentucky's 4-1 record is both a sign of improvement but also a bit of a paper tiger. This pivotal game serves as potential gateways to the second half of the season for both squads. A loss for Auburn will ramp up negative recruiting talking points and could impact player buy-in entering a tough four game stretch. However, Kentucky will be Auburn's easiest opponent for the next month, and getting a win now will pad Auburn's current 3-2 record before entering that grinding maw.

Thursday's result will also direct Kentucky through one of two gateways, although both have rosier overtones compared to the path Auburn would travel with a loss. A win moves UK to five wins and almost certainly assures a post-season berth with lowly Charlotte remaining on the schedule; but importantly, a win against Auburn also opens the realm of possibility for more than six wins. That would cement a three-year reclamation project and make Mark Stoops a candidate for higher profile coaching jobs. A win would also keep Kentucky in the middle of the hunt for the SEC East crown. A loss on the other hand wouldn't be damning, but the margins will get a bit tighter going forward. The 'Cats would also miss out on the opportunity to beat a prestigious opponent on a night when they'll be the main college football game on TV. 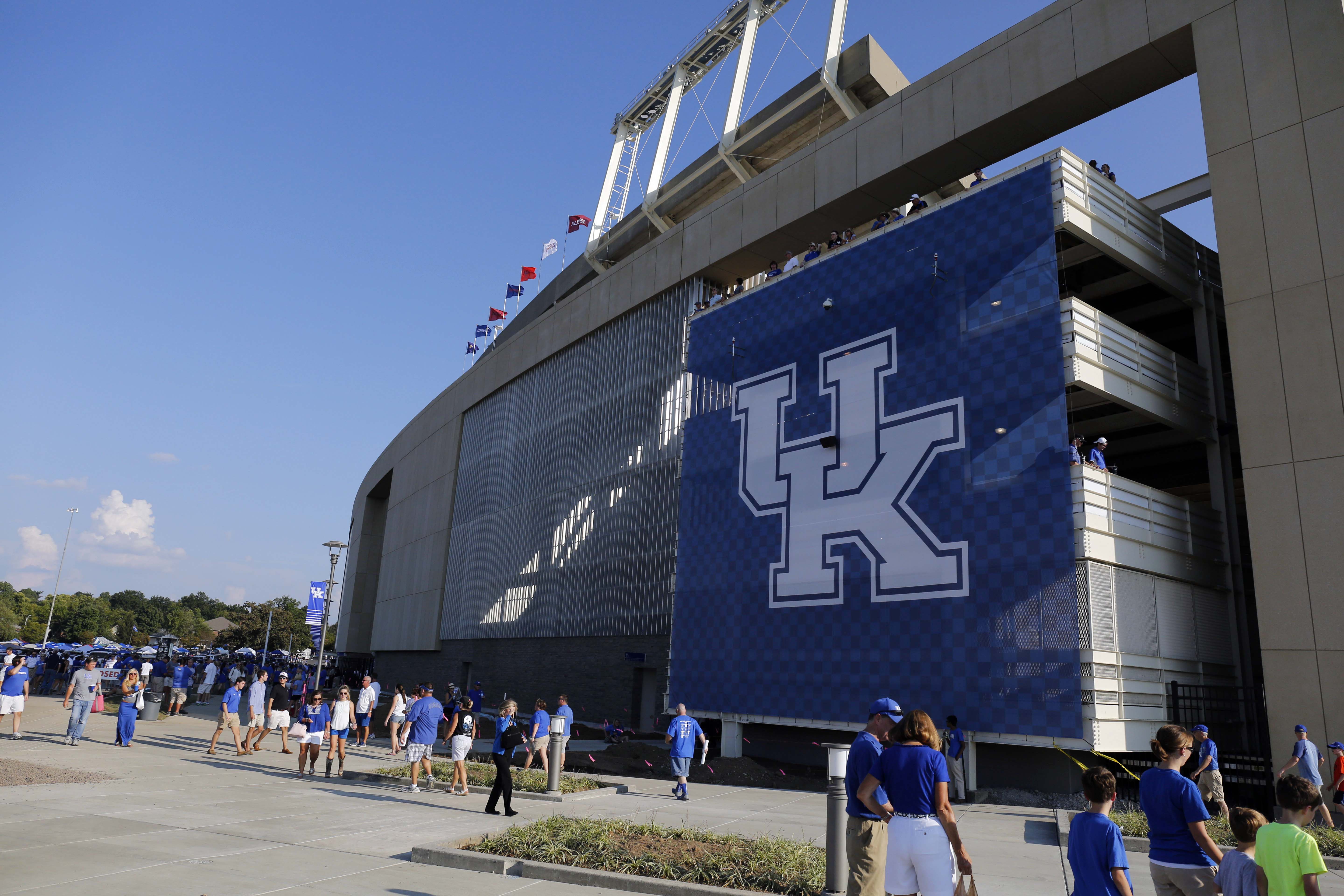 This is a game between two fair-to-middling SEC teams. Auburn's roster is probably more talented overall and has certainly played tougher competition than UK this season. Louisville, Mississippi State, and LSU are all top 40 teams, according to the F+ advanced stats rankings. UK's only opponent in the top 40 is Florida. Auburn could be better team than it's record indicates.

UK may not be as battle-tested, but the Wildcats have played confident this season which is uncharacteristic of recent UK teams. Despite trailing by 14 points with seven minutes left in the fourth quarter to Eastern Kentucky, the Wildcats still rallied to easily win the game in overtime. That same gumption has been on display all season as the team has battle regardless of what the scoreboard reads.

1Lexington Going Up On A Thursday. This game will be UK's first Thursday night home game since 1939. It was a different age, highlighted by this bit of anachronistic bulletin board material by Kentucky's then quarterback, "Listen here, our boys are ready, understand, they are ready, and that Tennessee team is in for a beating." The Wildcats would lose 19-0 despite "giving their all and asking no quarter", but in 2015 Big Blue Nation is hoping for a better outcome. It should be a scene in Lexington on Thursday. Keeneland is open, and many will make the trek in for a double dip of gambling with a football nightcap. The game was nearly sold-out by the end of July, and a week ago UK announced it was officially sold out. ESPN will carry the game further brightening the spotlight. It should all make for a raucous atmosphere in a stadium that has not seen many fun atmospheres in recent seasons.

2Life On The Precipice. UK's defense has been bend-don't-break all season, and so far that's been enough. The 'Cats have largely held teams to field goals, or caused turnovers thereby erasing gained yards. UK is allowing 170 yards per game on the ground while Auburn is running for an impressive 190 yards per game. The advanced stats show Auburn is a top ten team in Rushing Success Rate and a top 40 team in terms of Rushing S&P+. UK's defense meanwhile is ranked 76th in Rushing S&P+ and 116th in Rushing Success Rate.  Auburn doesn't create a lot of big plays, and UK doesn't allow them anyhow, but Auburn may kill the 'Cats by a thousand little cuts. Auburn running back Peyton Barber should reach his average of 111 yards per game this season.

3Aerial Combat. Four of UK's receivers have accounted for nearly 70% of the team's total receptions. They're a young bunch led by four talented sophomores that each average over 10 yards per catch. Enter the Auburn secondary which is ranked 9th in the SEC allowing 202 yards passing per game. The advanced stats are less kind and show Auburn's opponents have a passing success rate of 49%. UK's receivers appear poised to make explosive plays on Thursday night, according to these numbers. 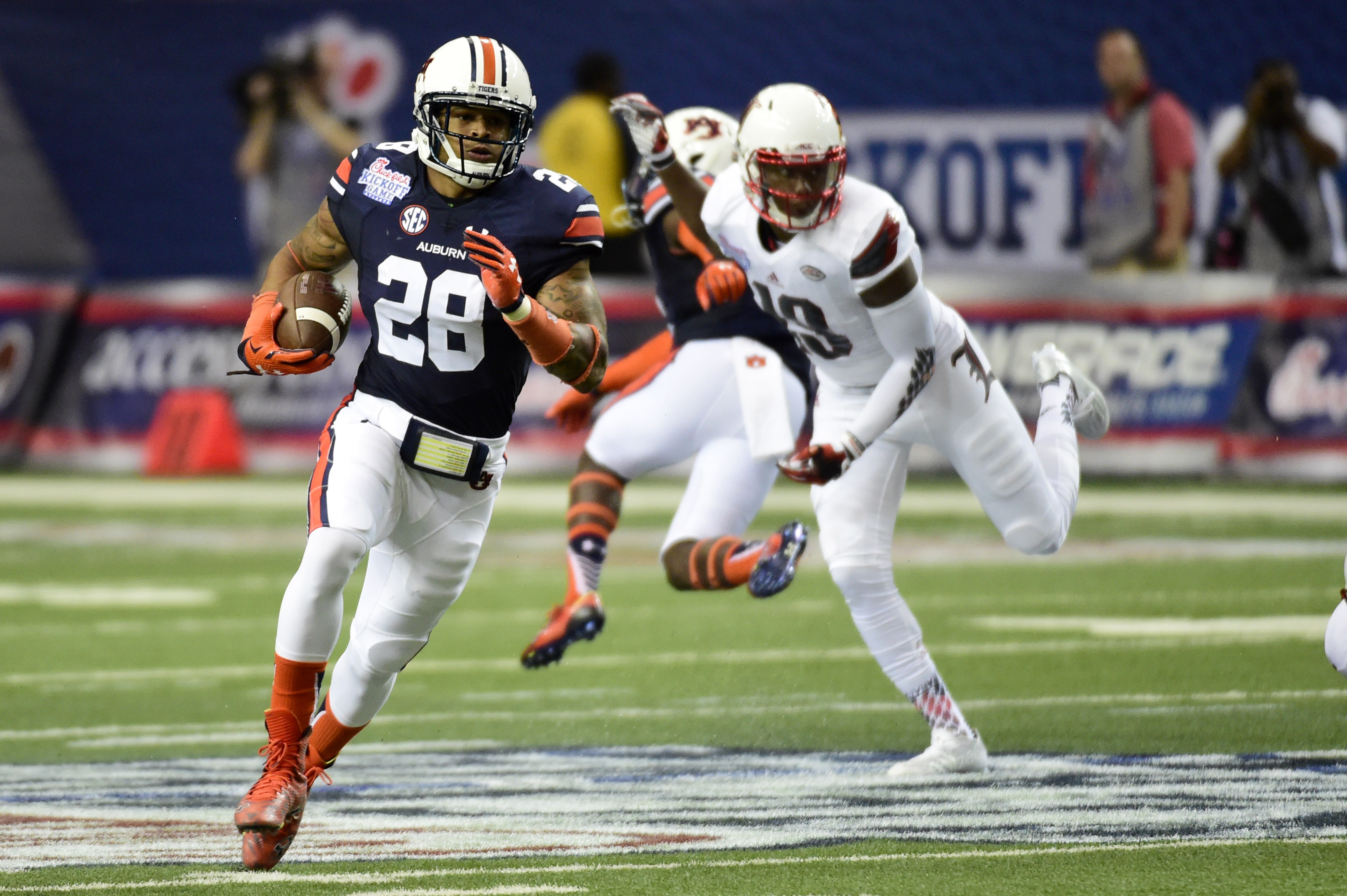 4Motivation. This one is simple: Auburn hasn't met preseason expectations, and Kentucky is a vulnerable team the Tigers likely think they can pick off before getting into the meat of their SEC West schedule. They presumably won't be intimidated by the atmosphere, and will come ready to play from kick-off. Kentucky, on the other hand, is already sitting at four wins with a lot of season left to play. Can the 'Cats match the Tiger's urgency?

5Bye Week Bought Time. Both teams are coming off their bye weeks, which neutralizes any edge bye weeks can give. Both Kentucky and Auburn had the week to let injured players heal. Auburn will get two defensive contributors back, while UK will get back its starting left tackle and probably its All-SEC place kicker. Both teams are close to full strength, and their respective bye weeks contributed to the healing time.

Stanley "Boom" Williams, RB, Kentucky: Kentucky's leading rusher returns after serving a one-game suspension for specifics not yet officially confirmed. Williams is rushing for 85 yards per game while averaging 7.5 yards per carry in four games this season. Williams and his offensive line will go up against an Auburn defense currently allowing 209 yards rushing per game. That figure is somewhat inflated by LSU rushing for 411 yards against the Tigers almost a month ago, but Williams—and the rest of UK's backfield—are a talented bunch either running between the tackles or receiving out of the backfield.

Sean White, QB, Auburn: This is a projection that White will get the starting nod for Auburn Thursday night, but whichever quarterback gets the majority of snaps will need to manage this game. Auburn should have an advantage running the ball, but there will be times when the Tiger quarterback will need to complete a third down pass to keep drives alive. White has been accurate so far this season, but Malzahn is largely asking him to connect on short passes. If Auburn can get in 3rd-and-5 situations, White will have to continue to convert those throws. If he turns over the ball, he would put the ball in the hands of a Kentucky offense that could make Auburn pay.

C.J. Johnson, DT, Kentucky: This goes out to all of Kentucky's 3-4 defensive linemen who will be trying to absorb blockers on Thursday night, but Johnson is their rightful figurehead. The JUCO transfer is second on the team in tackles accumulating 30 tackles, 3 tackles for loss, and 1.5 sacks in the last two games alone. There are very few defensive linemen who can match that output the last two games, but on Thursday Johnson will have to prove he's capable of replicating those results against teams that aren't Missouri or Eastern Kentucky. Auburn will try to run over and through UK, and Johnson will be at the tip of the spear trying to stop them.

The biggest factor in this game will be the micro-competition between UK's rush defense and Auburn's rush offense. If UK can force Auburn into passing situations routinely then UK will win this game. UK has displayed an advantage in its secondary versus Auburn's depleted receiver corps and ongoing quarterback issues.

Yet, it's difficult to foresee UK's defense being successful on standard downs against Auburn based on historical precedent. I've seen nothing to date that makes me think UK will hold Auburn below their 190 yards rushing per game average.  Auburn looks set to carry-out long drives, squeezing the life out of the clock, and limiting UK's offensive possessions. The subsequent outcome will be UK's boom-or-bust offense having even fewer opportunities to go "boom." UK's offense has lived on the precipice all season, and this will be a game when they pay for their inconsistency. Auburn will also be motivated and will need this win more than UK, and their play will reflect that reality. Auburn 24, Kentucky 14