Alabama Crimson Tide (4-0, 1-0 SEC): Bye. Nick Saban's record at Alabama is actually slightly worse percentage-wise off a bye than overall; he's 6-3 after a one-week break. But Ole Miss fans shouldn't feel too good about that; all three post-bye losses came against LSU.

Arkansas Razorbacks (3-2, 0-2 SEC): Lost to Texas A&M, 35-28 (OT). Has a team ever looked as good at 0-2 in the conference? Despite the fact that the winless streak in the SEC continues and the Razorbacks are just 2-2 on the year against FBS opponents, the Hogs are still getting votes in both polls. Here's the thing, though: Literally every opponent that Arkansas faces in the SEC this year is currently ranked in at least one poll. After a buy this week, the Razorbacks will embark on a leg of the schedule that features six Top 25 teams in seven weeks, with only the non-conference game against UAB providing any let-up. Arkansas still has a good chance to get to a bowl, but it could be forced to knock off two ranked teams to get there.

Auburn had Nick Marshall and Jeremy Johnson in the game at the same time when Cameron Artis-Payne scored on a 5-yard run. Johnson was at quarterback, and Marshall was lined up as a receiver.

Auburn apparently thinks it's no longer enough to force teams to defend a quarterback who averages 6.5 yards a rush and a quarterback with a passer efficiency rating of 226.48; now the Tigers are going to make teams defend them at the same time? Oh, yeah, and this Quan Bray guy might be pretty good, what with the 44-yard touchdown reception, 37-yard touchdown reception and 76-yard punt return for a touchdown. 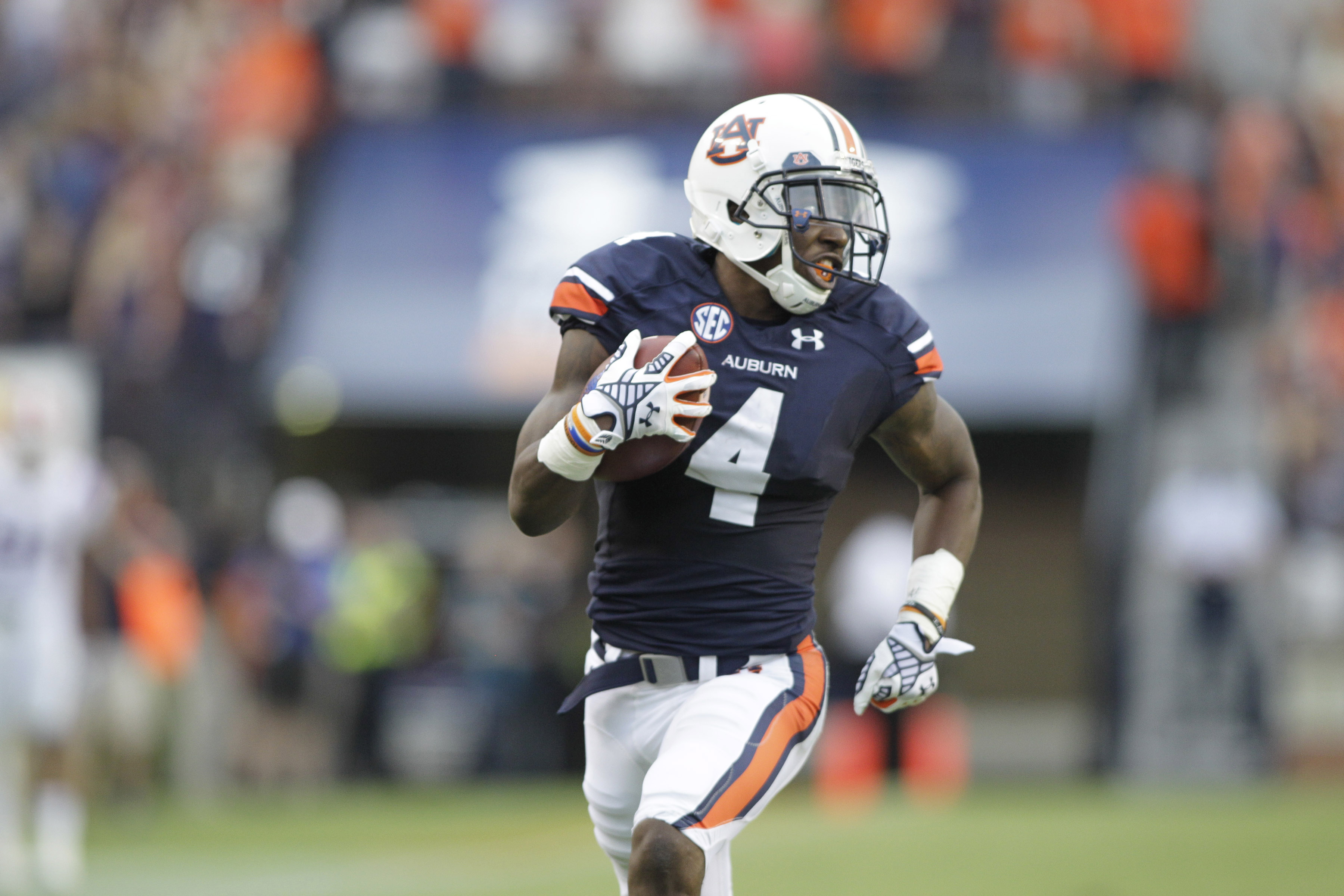 Florida Gators (2-1, 1-1 SEC): Bye. The Tennessee game is shaping up as something of a make-or-break contest for the Gators, not because Will Muschamp is going to survive this season (he's not), but because it could spell the difference between a mediocre bowl season and a disaster. I think stuff like this is generally psycho-babble, but Muschamp could lose this team if they don't beat the Volunteers, and I don't like their chances.

Georgia Bulldogs (3-1, 1-1 SEC): Defeated Tennessee, 35-32. After the first week, I questioned whether Todd Gurley could continue to win games by himself. Perhaps the phrasing was poor, but the fact remains that Gurley ran for 339 yards and three touchdowns on 48 carries in his first two SEC games -- an average of 7.06 yards a carry. And despite that, the Dawgs lost the game at South Carolina and came perilously close to losing the game against Tennessee. The East might be down this year, but if Georgia still harbors hopes of winning the division and perhaps making a run at the conference title, the Dawgs are going to need to be able to do something productive on offense besides handing the ball to Gurley or another member of their otherworldly running back corps and asking that back to bang out another 10 yards. 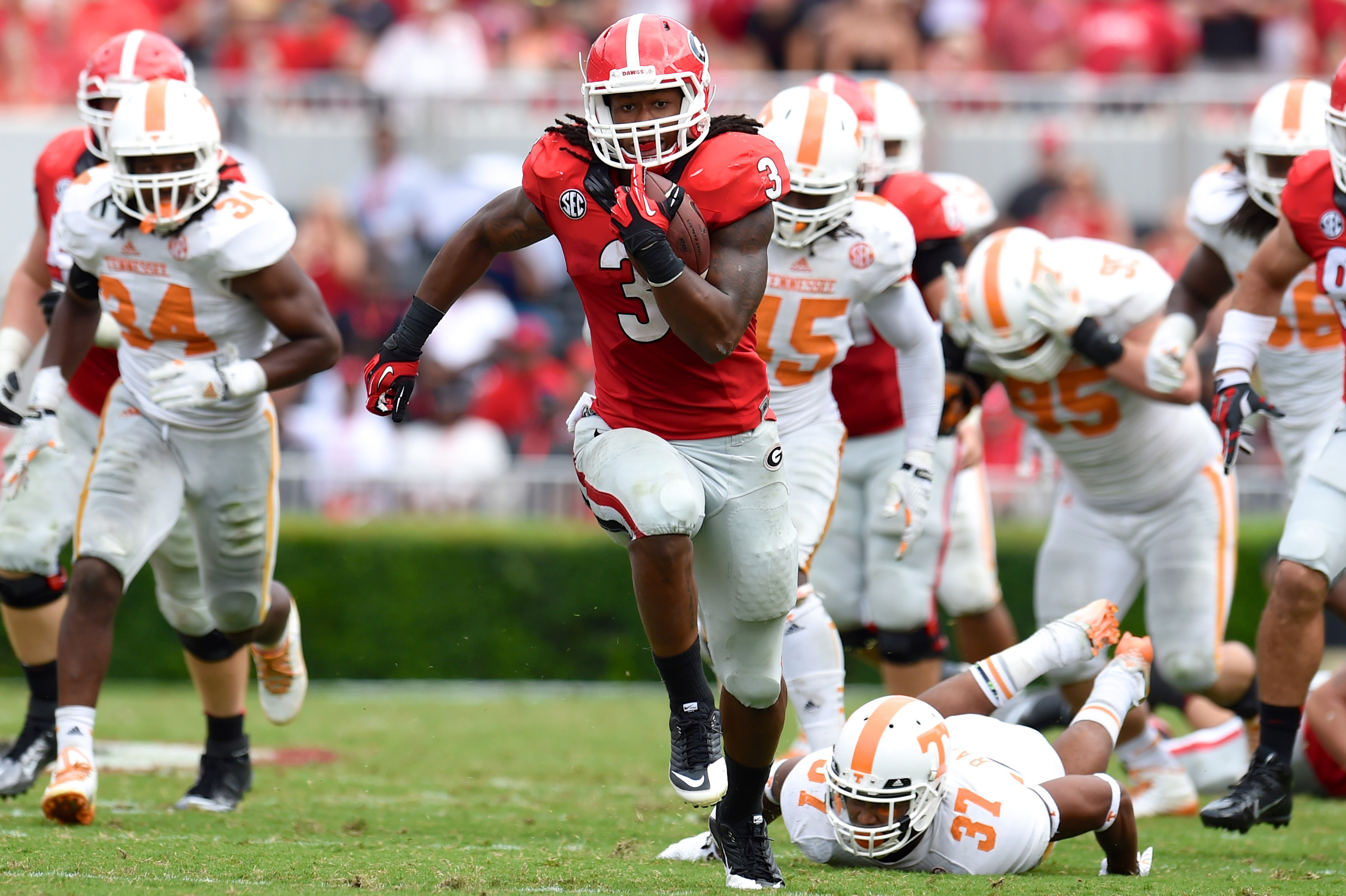 Kentucky Wildcats (3-1, 1-1 SEC): Defeated Vanderbilt, 17-7. Patrick Towles and the offense have been getting a good share of the limited attention that Kentucky has drawn early in the season, which is understandable -- when is the last time Kentucky had something approaching a functioning offense? But the Wildcats are actually pretty decent on defense this year, even if holding Vanderbilt to seven points on Saturday isn't exactly a mammoth achievement. UK ranks third in the SEC in passing efficiency defense, holding opposing quarterbacks to a 99.03 rating, which is bad in college. Part of that is because the 'Cats already have six interceptions this year, with Ohio being the only team to play Kentucky and get away without throwing a pick. Overall, Kentucky's giving up just 4.6 yards a play, tied for third in the conference. It's early, and the teams that Kentucky has played have been -- struggling -- offensively, but Mark Stoops might be showing why he was such a highly respected defensive coordinator.

LSU Tigers (4-1, 0-1 SEC): Defeated New Mexico State, 63-7. Les, can you and I talk for a moment? I know you're trying to be all coy about who's the starting quarterback, but I really hope that's an act. The debate is pretty much over for everyone else. Brandon Harris' passer rating is 242.99. Anthony Jennings' rating is 137.54. That's less. Harris has completed 73.3 percent of his passes; Jennings has completed 50.6 percent. That's also less. I know that you want to be loyal to your guys and that you've always had an interesting approach to deciding who should play quarterback, but this one shouldn't really be all that hard. Let Harris take a shot at quarterback and see what happens. You're already on the ropes when it comes to winning the SEC West; take one of your infamous gambles and go with the guy who looks better right now. 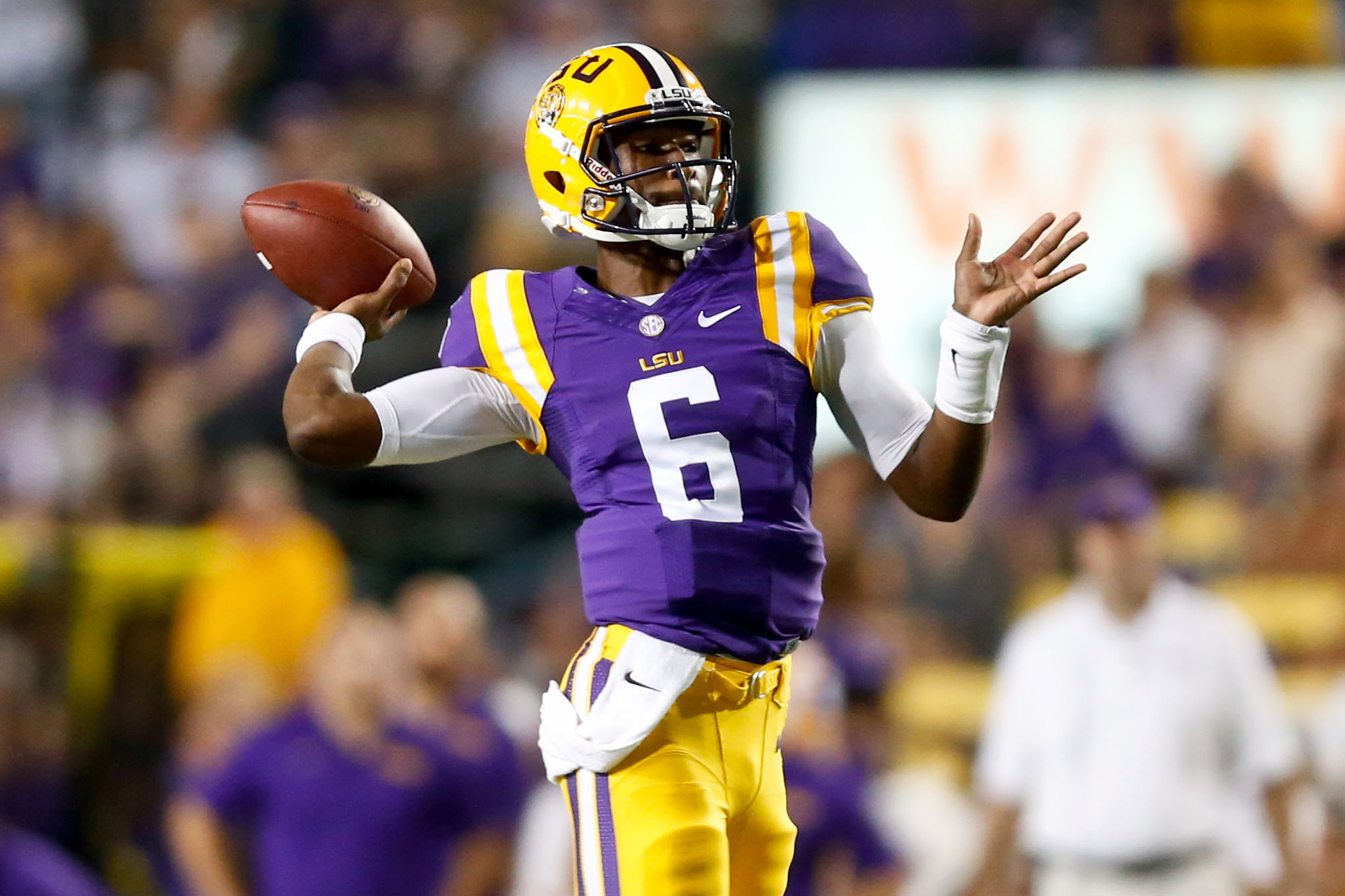 Mississippi St. Bulldogs (4-0, 1-0 SEC): Bye. A win against Texas A&M on Saturday would make the Bulldogs one of at most three and possibly two undefeated teams in the SEC West. On the other hand, loss could put Mississippi State in a position where it can't afford to lose another game if it wants to remain in the division race. No pressure.

Missouri Tigers (4-1, 1-0 SEC): Defeated South Carolina, 21-20. The game against Indiana might not have been the Missouri defense's shining hour, but Tiger fans don't appear to have been joking when the said that Markus Golden and Shane might be just as good as Michael Sam and Kony Ealy. The Mizzou defensive line played a major role in Saturday night's game, getting Dylan Thompson for four sacks -- South Carolina had allowed five sacks total in its previous four games -- and generally harassing the Gamecocks' signal caller. Ray and Golden already have 12 sacks between them so far. And while Mike Davis got his yards, the South Carolina rushing attack was held to 119 yards on 42 carries, for an average of just 2.8 yards a carry -- the lowest average for South Carolina this year.

Stop and think for a minute, Shane Ray is FOUR (4) sacks away from breaking Aldon Smith and Michael Sam's shared record (11.5) 7 more games

Ole Miss Rebels (4-0, 1-0 SEC): Defeated Memphis, 24-3. The Memphis win wasn't impressive, but it was all the Rebels needed to get their first GameDay visit in program history. The hosts of the pregame show are 3-1 in true home games this year, with South Carolina's loss to Missouri the sole exception. The lesson? Don't let Kenny Chesney be the guest picker. You do have the legal authority to throw ESPN off school property if they threaten to do this.

South Carolina Gamecocks (3-2, 2-2 SEC): Lost to Missouri, 21-20. The Missouri loss should pretty much retire any hopes Gamecock fans had of winning the East. The reason has as much to do with what's left on the schedule as with the loss itself. The Gamecocks can beat every remaining SEC team on their slate (though they can also lose to every remaining SEC team on their slate) -- except Auburn. The game against the Tigers is probably going to be at least the third conference loss for South Carolina. They would then need Missouri to take on four losses or to end up in a three- or four-team tie with Missouri in which all the tiebreakers go the Gamecocks' way. That's possible -- a three-loss team winning the SEC East might even be probable at this point -- but it's not something to build your hopes around. Better to shoot for as good a bowl as possible and begin taking some steps toward strengthening the team for 2015, perhaps by getting some meaningful snaps for a quarterback who could take over for Thompson.

Tennessee Volunteers (2-2, 0-1 SEC): Lost to Georgia, 35-32. Okay, Volunteers: Now, I'm impressed. Yes, passing for 284 yards and three touchdowns against Georgia isn't necessarily anything to write home about this year, but Georgia appears to at least be as good as any other team in the SEC East -- who really knows? -- and Tennessee took them to the wall in their own house. And Jalen Hurd might have helped cost the Vols the game, but he ran for 119 yards on 24 carries, boosting his total for the season to 328 yards on 72 attempts. It's still hard to see this team winning the division or anything, but a bowl game looks like a certainty now, with three conference wins being well within reach.

Texas A&M Aggies (5-0, 2-0 SEC): Defeated Arkansas, 35-28 (OT). Every championship team is going to go through a game where a seemingly lesser foe almost knocks it down. That's not to say that the Aggies are going to win the SEC West, or even that they're the favorites -- but college football is a sport where you win the game in front of you and remain alive for another week. The warning sign here is that Kenny Hill looked pretty dreadful in the first half, going 10-of-22 passing for 96 yards and a touchdown -- before turning things around late, going 11-of-19 for 290 yards, three touchdowns and interception in the second half and overtime. That includes completing five of nine passes for 179 yards, two touchdowns and an interception in the fourth quarter. It's hard to see that kind of rebound happening often against the likes of Alabama. 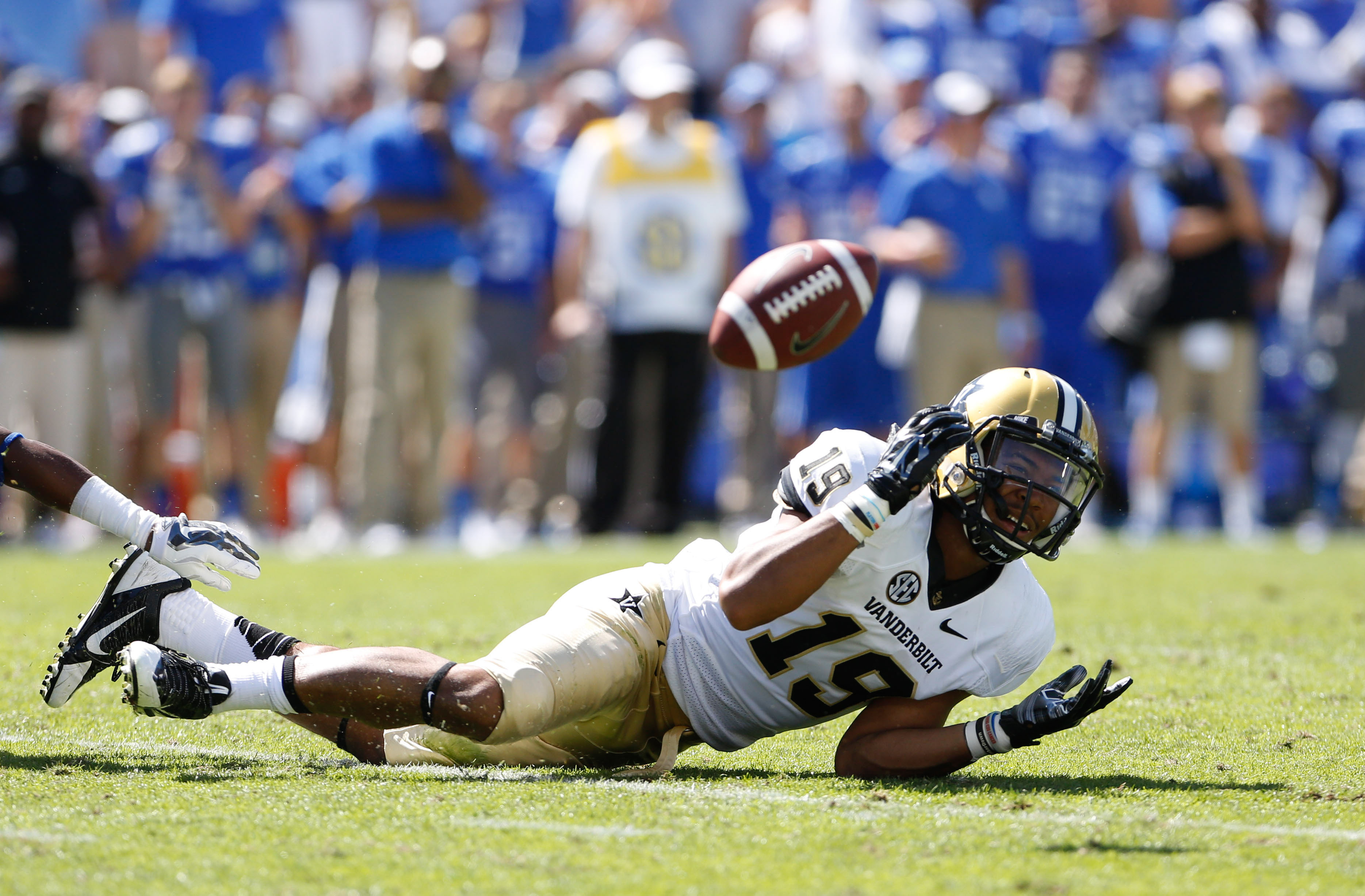 Vanderbilt Commodores (1-4, 0-3 SEC): Lost to Kentucky, 17-7. I just don't know what to say anymore. Eight first downs off of 85 passing yards and 54 rushing yards. A 36.56 passing efficiency rating. No drive that covered more than 30 yards. At least the defense scored.