Tennessee's Best and Worst Came Out Against Oklahoma

The Vols have some fatal flaws, but the potential is there.

Share All sharing options for: Tennessee's Best and Worst Came Out Against Oklahoma

Tennessee lost 34-10 to Oklahoma on Saturday. The following might sound like damning with faint praise, but it's certainly not intended to be. OU is one of this year's elite teams, so a team coming off three straight bowl-less seasons doing relatively well against the Sooners is impressive.

The Vols handled themselves a lot better than I thought they would. I was expecting a nasty blowout, and while losing by 24 isn't fun, it wasn't a disaster either. The problems the team had going into the season are just as bad as we thought they'd be, but the Vols fought hard and never gave up. If UT can build on the improvement it showed against the Sooners, it'll get back to the postseason this year.

Tennessee's signal caller had a much better night than his line of 21-for-44 (47%) for 201 yards (4.6 YPA) with one TD and two INTs would suggest. I didn't keep track, but I'd estimate that about half of his incompletions were throwaways due to pressure or no one being open (or both). He seldom had a pass play where he could just drop back and shop for a receiver, and he spent too much time Saturday night horizontal. 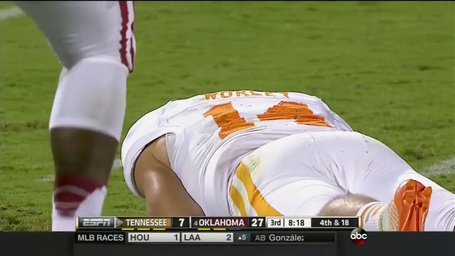 A summary of Worley's game against Oklahoma. Screencap of ABC telecast.

Oklahoma sacked Worley five times and nearly got two others—one time he somehow stayed upright with a defender draped on him and completed a shovel pass to Marlin Lane and the other was a sack that got called back for an obvious facemask penalty. He found himself hurried and harassed more often than not and, as I said, he had to throw a lot of passes away. Also, his first interception was not his fault. He hit Jason Croom in the back of the end zone, but the pass went through Croom's hands and into the arms of Zach Sanchez.

He was not perfectly sharp otherwise. His accuracy wasn't always there, with short arming passes seeming to be his most frequent miscue. He also stared down Marquez North on Julian Wilson's 100-yard pick six, and he did the same thing a little later on a would-be interception that Oklahoma dropped.

But look: we already knew Worley is not Peyton Manning. His worst mistakes came after more than three quarters of getting beat up. If not for that touchdown on the 100-yard interception return—something that a program gets or allows about once a decade—the game probably finishes at 27-10 or 27-13, and suddenly everyone would be talking about how close the Vols made this game. Worley deserves a lot of credit for how he played in this game, especially given all the other things I'm about to discuss.

The lines are what we thought they were

If you heard one thing about Tennessee this offseason, it was that the Vols had to replace every starter on both lines. Boy, did it show in this one.

The box score would have you believe that, once you take sacks out, Tennessee ran for 112 yards on 27 carries (5.33 YPC). It lies. I mean, those numbers are true, but 72 of those yards came on a 43-yard and a 29-yard rush by Jalen Hurd. Take those two out, and the Vols ran for a mere 2.88 YPC on the other 25 runs. The rare occasions when Hurd or Marlin Lane found something good mostly came on misdirection plays like counters. When Tennessee tried to line up and smash ahead, it was its own back that got smashed.

"Out of sync" might be the most kind way to describe the UT O-line on Saturday. It did have troubles with blitzes, something you'd expect from a line without much playing time together. However, on five of the seven sacks or almost-sacks of Worley, Oklahoma only rushed four or fewer players. Combine the green line with the fact that the primary tight end is the undersized freshman Daniel Helm, and it was a recipe for massive issues.

OU's second sack of Worley exposed the problem well. On a third-and-five late in the first quarter, LB Eric Striker showed blitz by running up to the right edge of the line where Helm and freshman OT Coleman Thomas were. Striker ended up dropping into coverage with OU rushing just three. Even though Striker backed off the line well ahead of the snap, Helm still went to block where he came up. Thomas was blocking DT Chuka Ndulue, and the way he gave up the block early and turned to assist inside suggested he was expecting to pass Ndulue off to Helm. Helm wasn't there, and Ndulue flattened Worley before the quarterback was even able to get off what was going to be a quick throw. A miscommunication and misread by a pair of freshman killed a decent third down play call and forced a punt.

The Tennessee defensive line had a better day than the offensive line did, but it still wasn't a game changer. It frequently got immediate help from linebackers A.J. Johnson and Jalen Reeves-Maybin, and it seldom got any pressure on Trevor Knight without help from blitzes. Knight's mobility helped him avoid trouble, and he made a few big plays simply by throwing quick passes to the middle of the defense where a linebacker typically would be. The Vols wanted Oklahoma to beat them with the pass, and while OU ended up doing just that, UT did a pretty good job on the run.

With a better and more experienced line, Tennessee's linebackers wouldn't have had to crash the front as often. With more chances to drop into coverage, they could have disrupted Oklahoma's passing game more. Alas, the defensive line is still finding its way. We knew it coming in, and we saw it on Saturday.

A microcosm: the wide receivers

Perhaps nothing sums up the Tennessee team better than looking at their wide receiving unit. With guys like North, Josh Smith, and Pig Howard, it has a lot of talent that is, in the case of the former two, still relatively young. They couldn't always find openings against the Sooner secondary, but OU has a good defense. They still got open more often than most of Oklahoma's opponents' receivers will, and the downfield passing game being Tennessee's best offensive option had a lot to do with their play.

With that said, they have a lot of work to do in their blocking. With the running game largely bottled up, Tennessee tried to use some swing passes and bubble screens as extended run plays. On those, no gain ended up being a pretty positive result given how many got stopped for a loss. Oklahoma has a lot of speed on the outside, and, to put it plainly, UT's receivers can't block at all.

It's definitely best to play the Vols early in this season than late. It's hard to see them beating Georgia in two weeks, and they'd be in better shape for their home game against Florida if it happened a month later (though they absolutely could beat UF if the game was this Saturday). Their November games against South Carolina and Missouri will be very telling for the future. If they can pull off one of those games, it'll provide a lot of hope that 2015, and not 2016, is the year this team will be ready to make some real noise in the East.

Tennessee was never going to win on the road against a team as good as Oklahoma is this early in this season. While the Sooners exploited the Volunteers' flaws in ways anyone could have predicted, UT still kept the game closer than anyone would have expected for a lot longer than they'd have expected. Some problems, like the offensive line, just won't get solved entirely this year because only time can fix them. There still is plenty of room for advancement between now and season's end, though.

Moral victories aren't ever as fun as real victories, but Butch Jones and his players can hold their heads high after Saturday's performance.