SEC Media Days 2014: Auburn's Gus Malzahn Has Learned Not to Answer Your Questions

The Tigers' head coach might not have been at this for too long, but he knows how to bob and weave like a pro

Share All sharing options for: SEC Media Days 2014: Auburn's Gus Malzahn Has Learned Not to Answer Your Questions

Often, it takes years for an SEC head coach to perfect the art of appearing to say something while saying nothing. Some, like Steve Spurrier, never bother to try. But some are also quick learners -- and Gus Malzahn, after one short year at SEC Media Days, has already mastered saying relatively little or nothing in response to the questions he doesn't want to answer.

Many of those questions this year revolved around Nick Marshall -- the Auburn starting quarterback who was benched for this year's press event because of a citation for marijuana possession. Malzahn had to address that, because it would have appeared odd if C.J. Uzomah had appeared in Marshall's stead and no one had bothered to mention it. Malzahn tried to head things off at the pass in his opening statement.

It is a privilege and a reward to represent Auburn here at the SEC Media Days. Last Friday, Nick lost that privilege. ...

Nick made a mistake and he'll have to deal with the consequences. I'm not ready to say what those consequences are at this time, but he will deal with it. I know he's regretful and he feels very bad about it.

Note the "I'm not ready to say what those consequences are at this time." Because, almost inevitably, the first question dealt with whether it was possible Marshall might be suspended for the Arkansas game -- a question that was quickly swatted away by Malzahn as something he wasn't ready to answer yet. The follow-up exchange:

Reporter: When do you think you'd be at that point?

Another question asked what Malzahn hopes Marshall learned from the experience. "I'm hoping he learns a lesson," Malzahn began. He never specified what he hoped that lesson would be. That was followed by a question on players using marijuana, which Malzahn avoided as if someone were actually trying to hand him a bong on national television.

Well, we have school rules. Of course, I have team rules. We abide by them.

And Malzahn's coachspeaking abilities were not confined to Marshall's status. Last year, Auburn "snuck up on a lot of people." Malzahn's relationship with Bret Bielema is "professional." (The assembled reporters managed to avoid laughing at this point.) Auburn hopes to be balanced on offense. And on and on it went like that. 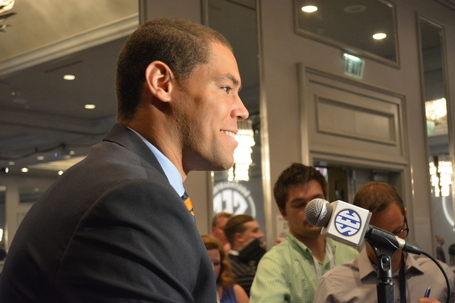 Uzomah, for his part, handled his part well. Particularly for someone who was only told Sunday that he would be taking the stage -- causing his mother to scurry to get Uzomah a relatively new suit.

This is my first time wearing this suit. So I'm glad it kind of fits nicely. ... It was definitely a shock but it's definitely an honor.

Reese Dismukes offered a more succinct take on what he thought when he heard about Marshall's citation: "That sucks."

Malzahn was more willing to discuss a topic that he and everyone else wishes he hadn't needed to discuss: The death of Philip Lutzenkirchen. There will be a recognition of the well-liked player, Malzahn said, but what it will be is still up in the air.

He's very unique. His teammates loved him. He was a true Auburn man. He was a great player, too. One of the better players to ever put on an Auburn uniform. Just had that ability to play his best in the biggest games.

He had the "it" factor. So that was definitely a tough blow to the Auburn family. But he'll definitely be remembered and we'll do somethings to honor him for a long time to come.

Malzahn and his players wore a button to commemorate Lutzenkirchen. 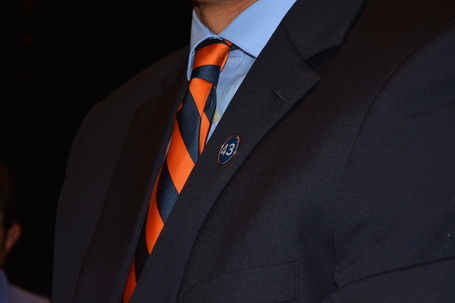