Has SEC Move Given Texas A&M Recruiting Advantage Over Texas?

When the Aggies jumped from the Big 12 to the SEC, it was supposed to have made a big recruiting difference. Has it?

Share All sharing options for: Has SEC Move Given Texas A&M Recruiting Advantage Over Texas?

The story with recruiting at the University of Texas famously is that the Longhorns don't actually recruit in their home state; they select. Or, at least, that was the story.

When Texas A&M moved to the SEC, the dynamic between the schools figured to change. Suddenly, top talent in the Lone Star State could both remain close to home and play in the nation's premier conference. A couple of years into this experiment, how much has changed?

Quite a bit, actually. Here are the overall class ranks of Texas and Texas A&M since 2009 using the 247sports composite. The composite is a synthesis of the major recruiting outlets into a single ranking, and I went back to 2009 because that's as far back as it goes without getting incomplete data. 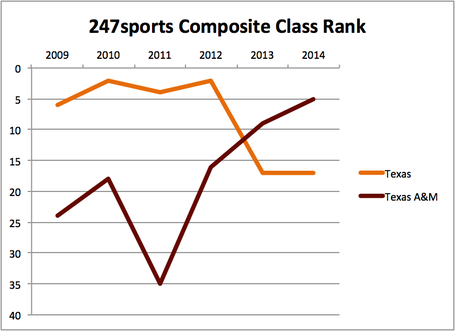 The 2012 recruiting class was A&M's first as an SEC school, but it wasn't a member for the entire recruiting cycle. You can see that for the past two classes, with the institution firmly inside the SEC, there is a large difference.

Of course, overall rank can be misleading thanks to varying sizes of classes. If a school only has room for 20 recruits, it's probably going to rank lower than a comparable school that is signing 28. So, here is average player rank using the same 247sports composite. A score of 90 or above signifies a 4-star recruit level: 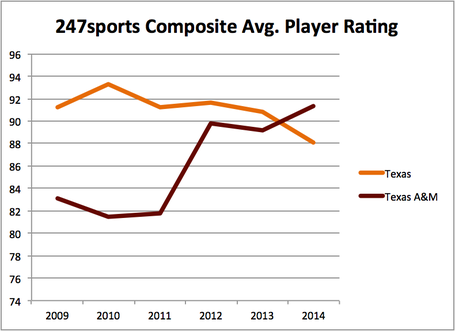 Here, we actually see the big change happening right away with the conference swap. There's no two ways about it: Texas A&M recruiting hit a much higher level in 2012, one that it has been able to sustain.

How about specifically with recruits inside the state of Texas? I don't have time to go searching through articles to catalog every Texan high schooler's rationales for their college choices, so the raw numbers will have to do. Here I used Rivals, as it has a better searchable database than 247sports does, and I kept it to 4-star players and above. 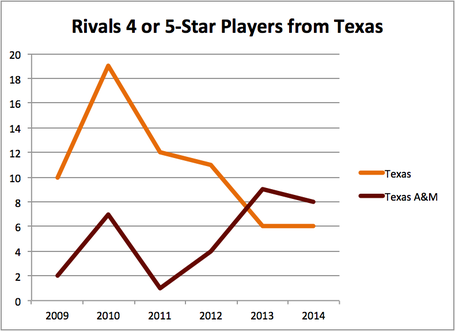 Again, we see Texas A&M gaining an upper hand in 2013-14. Texas's recruiting of top talent actually fell being A&M's in those two years. And how about average player rank? 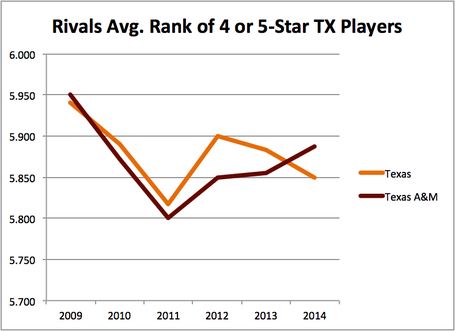 The 2009 and 2011 averages for TAMU don't make a whole lot of sense, as the school signed just two and one top rated Texas recruits, respectively. However as we can see, it's been high and getting higher for A&M since 2012.

Case closed then. Jumping to the SEC has made a materially positive impact on Texas A&M's recruiting, perhaps even at the expense of Texas, right?

There are two pretty big confounding factors here. The biggest is that A&M changed coaching staffs at the same time it made the conference switch. From the outside, Kevin Sumlin seems to be a more engaging guy than the fairly milquetoast Mike Sherman was. Plus, Sumlin's style of offense is exciting and really sells itself. It's difficult to say how much of the difference here is due to the conference switch and how much is due to the coaching switch.

The second factor is Johnny Manziel. It's difficult to overstate how much he matters here. Manziel proved that being a great player at Texas A&M can give you enough exposure not only to win major awards but also hang out with celebrities and be treated like one yourself. That kind of life won't appeal to everyone, but it sure does appeal to a lot of folks. Manziel has brought a level of cool to the program in a similar fashion to Pete Carroll at USC when Snoop Dogg and Will Ferrell used to hang out at practice in L.A. This factor also goes back to Sumlin, as we all saw that Sumlin will let his top talent shine and carry the team as far as it can.

We actually have something of a control test here with Missouri. It jumped to the SEC at about the same time Texas A&M did, but it did not have major coaching staff changes or a sudden supernova of a star. How does MU compare? 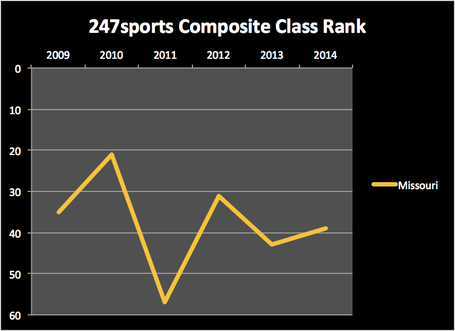 As far as class rank goes, we don't see a ton of difference here pre- and post-SEC move. The best class here came two years before the conference move, and two of the school's three SEC classes rank lower than its two best Big 12 classes in this span. 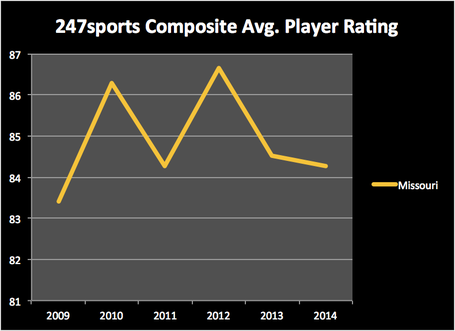 Again, it's pretty inconclusive. There is no clear improvement beginning in 2012 that sustains on into the future like we see with Texas A&M. If SEC membership alone can impart instant recruiting improvements, it has not done so with Mizzou.

Finally, it's also worth noting that Texas has been on a down swing for a few years. The Longhorns haven't won 10 or more games since 2009, the team fell down to only five wins in 2010, and it has had well documented troubles on both sides of the ball in recent seasons. It's the sort of late-career slide for Mack Brown that we've seen elsewhere with guys like Phillip Fulmer and Bobby Bowden.

Brown is gone now, and Charlie Strong is in control. Strong didn't crank out top-rated classes at Louisville, but selling Texas is a whole different animal. Plus, he was known as one of the best recruiters on the Florida staff as a defensive coordinator. The 2014 class is far more a Brown creation than a Strong creation, so it really won't be until this time next year that we have a decent datapoint to begin evaluating how the new staff in Austin affects the recruiting dynamic in the state of Texas.

SEC membership has no doubt helped Texas A&M in a few specific cases, but it's not possible to attribute the all of the program's increased recruiting success to conference affiliation alone. Sumlin and Manziel have made TAMU a more attractive place to be, and Texas going through an old coach's fade probably helped the Aggies some too.